The study of new semiconductor devices and surrounding technology is sometimes considered a branch of physics. This article focuses on engineering aspects of electronics. Other important topics include electronic waste and occupational health impacts of semiconductor manufacturing.

In our modern technological society, we are surrounded by electronics equipment. Many of the things we rely on every day, from automobiles to cellular phones, are associated with electronic devices. In the future, electronic devices will likely become smaller and more discrete. We may even see the day when electronic devices are incorporated into the human body, to compensate for a defective function. For example, someday, instead of carrying a MP3 player, a person may be able to have one surgically implanted into his body with the sound going directly into his ears.

Overview of electronic systems and circuits Electronic systems are used to perform a wide variety of tasks. The main uses of electronic circuits are:

Both these applications involve the creation and/or detection of electromagnetic fields and electric currents. While electrical energy had been used for some time prior to the late nineteenth century to transmit data over telegraph and telephone lines, development in electronics grew exponentially after the advent of radio.

One way of looking at an electronic system is to divide it into three parts:

For example, a television set contains these three parts. The television's input transforms a broadcast signal (received by an antenna or fed in through a cable) into a current/voltage signal that can be used by the device. Signal processing circuits inside the television extract information from this signal that dictates brightness, color and sound level. Output devices then convert this information back into physical form. A cathode ray tube transforms electronic signals into a visible image on the screen. Magnet-driven speakers convert signals into audible sound.

Some categories of consumer electronics include telephones, audio equipment, televisions, calculators, and playback and recording of video media such as DVD or VHS.

One overriding characteristic of all consumer electronic products is the trend of ever-falling prices. This is driven by gains in manufacturing efficiency and automation, coupled with improvements in semiconductor design. Semiconductor components benefit from Moore's Law, an observed principle which states that, for a given price, semiconductor functionality doubles every 18 months.

Many consumer electronics have planned obsolescence, resulting in E-waste. 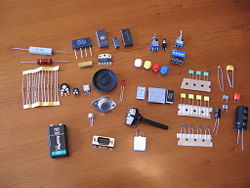 A collection of electronic devices.

An electronic component is a basic electronic building block usually packaged in a discrete form with two or more connecting leads or metallic pads. The components may be packaged singly (as in the case of a resistor, capacitor, transistor, or diode) or in complex groups as integrated circuits (as in the case of an operational amplifier, resistor array, or logic gate). Electronic components are often mechanically stabilized, improved in insulation properties and protected from environmental influence by being enclosed in synthetic resin.

Components are intended to be connected together, usually by soldering to a printed circuit board, to create an electronic circuit with a particular function, such as an amplifier, radio receiver, or oscillator.

Many electronic components are on the market today. A number of them are listed below. 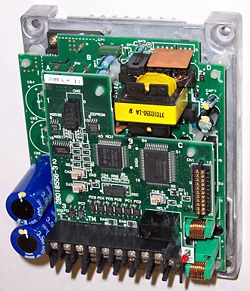 Most analog electronic appliances, such as radio receivers, are constructed from combinations of a few types of basic circuits. Analog circuits use a continuous range of voltage as opposed to discrete levels as in digital circuits. The number of different analog circuits so far devised is huge, especially because a 'circuit' can be defined as anything from a single component, to systems containing thousands of components.

Some analog circuitry these days may use digital or even microprocessor techniques to improve upon the basic performance of the circuit. This type of circuit is usually called 'mixed signal'.

Sometimes it may be difficult to differentiate between analog and digital circuits as they have elements of both linear and non-linear operation. An example is the comparator which takes in a continuous range of voltage but puts out only one of two levels as in a digital circuit. Similarly, an overdriven transistor amplifier can take on the characteristics of a controlled switch having essentially two levels of output.

Digital circuits are electric circuits based on a number of discrete voltage levels. Digital circuits are the most common physical representation of Boolean algebra and are the basis of all digital computers. To most engineers, the terms "digital circuit," "digital system" and "logic" are interchangeable in the context of digital circuits. In most cases the number of different states of a node is two, represented by two voltage levels labeled "Low" and "High." Often "Low" will be near zero volts and "High" will be at a higher level depending on the supply voltage in use.

Heat generated by electronic circuitry must be dissipated to prevent immediate failure and improve long term reliability. Techniques for heat dissipation can include heatsinks and fans for air cooling, and other forms of computer cooling such as water cooling. These techniques use convection, conduction, and radiation of heat energy.

Noise is associated with all electronic circuits. Noise is generally defined as any unwanted signal that is not present at the input of a circuit. Noise is not the same as signal distortion caused by a circuit.

Circuit analysis is the study of methods of solving generally linear systems for unknown variables such as the voltage at a certain node or the current though a certain branch of a network. A common analytical tool for this is the SPICE circuit simulator.

Also important to electronics is the study and understanding of electromagnetic field theory.

Electronic test equipment is used to create stimulus signals and capture responses from electronic Devices Under Test (DUTs). In this way, the proper operation of the DUT can be proven or faults in the device can be traced and repaired.

Practical electronics engineering and assembly requires the use of many different kinds of electronic test equipment ranging from the very simple and inexpensive (such as a test light consisting of just a light bulb and a test lead) to extremely complex and sophisticated such as Automatic Test Equipment.

Many different methods of connecting components have been used over the years. For instance, in the beginning point to point wiring using tag boards attached to chassis were used to connect various electrical innards. Cordwood construction and wire wraps were other methods used. Most modern day electronics now use printed circuit boards or highly integrated circuits. Health and environmental concerns associated with electronics assembly have gained increased attention in recent years, especially for products destined to the European Union, with its Restriction of Hazardous Substances Directive (RoHS) and Waste Electrical and Electronic Equipment Directive (WEEE), which went into force in July 2006.