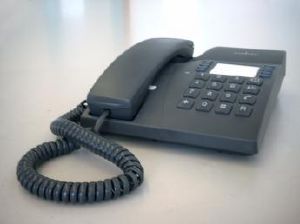 The telephone (or phone) (from Greek: tele = far away; phone = voice) is a telecommunications device that is used to transmit and receive sounds (most commonly voice and speech) across distances. Most telephones operate through the transmission of electric signals over a complex telephone network that allows almost any phone user to communicate with almost any other. The communication links may be established by wire connections, radio waves, or broadband Internet. In addition, basic phone service is often enhanced with such features as voicemail, caller ID, teleconferencing, direct distance dialing, and last call return. Unfortunately, the phone system is also misused through such activities as fraud, prank calls, bomb threats, "phreaking," and "war dialing." 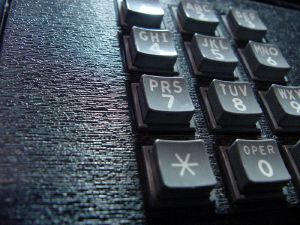 A subscriber may be connected to the telephone network in one of three principal ways:

Between end users, transmissions across a network may be carried by fiber optic cable, landline cable, point-to-point microwave or satellite relay.

Until relatively recently, a "telephone" generally referred only to landlines. Cordless and mobile phones are now common in many places around the world, with mobile phones expected to gradually displace the conventional landline telephone. Unlike a mobile phone, a cordless phone is considered landline because it is usable only within a short distance of a personal or domestic base station connected to a fixed phone line.

The identity of the inventor of the electric telephone remains in dispute. Antonio Meucci, Johann Philipp Reis, and Alexander Graham Bell, among others, have all been credited with the invention. Moreover, the early history of the telephone is a confusing morass of claims and counterclaims, which was not clarified by the huge mass of lawsuits that hoped to resolve the patent claims of individuals. Much money was expended, particularly in the Bell Telephone companies, and the aggressive defense of the Bell patents resulted in much confusion. Additionally, the earliest investigators preferred publication in the popular press and demonstration to investors instead of scientific publication and demonstration to fellow scientists.

It is important to note that there is probably no single "inventor of the telephone." The modern telephone is the result of the work of many, all worthy of recognition of their contribution to the field. Recently, however, the British government announced that it now recognizes (primarily for educational purposes) Antonio Meucci (see below) as the 'first inventor' of the telephone.

A timeline of the invention and development of the telephone is given below. 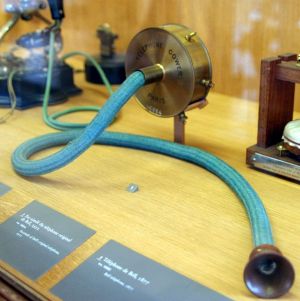 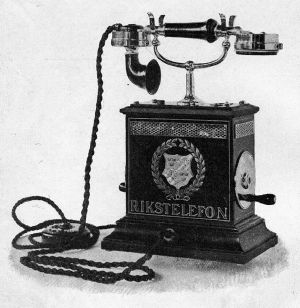 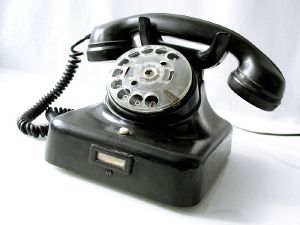 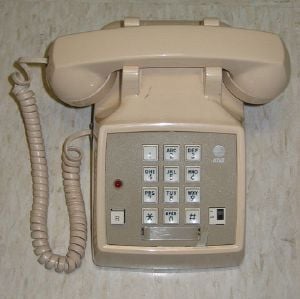 Internet telephony, or Voice over Internet Protocol (VoIP), competes with and appears to be rapidly replacing PSTN. VoIP technology, grouped under digital telephony, uses a broadband Internet connection to transmit conversations as data packets. It may also compete with mobile phone networks by offering free or lower cost connections, but it requires equipment that is connected to the Internet. VoIP is also used on private wireless networks which may or may not have a connection to the outside telephone network.

The term "wireless" can refer to any telephone that uses radio waves for transmission, but it is primarily used for cell phones. In the United States, wireless companies tend to use the term wireless to refer to a wide range of services, while the cell phone itself is called a mobile phone, mobile, PCS (Personal Communications Service) phone, cell phone, or simply cell. The trend is now moving toward "mobile." The changes in terminology are partially the result of providers using different terms in marketing, to differentiate newer digital services from older analog systems and services of one company from another.

Cordless telephones, invented by Teri Pall in 1965, consist of a base unit that connects to the landline system and also communicates with remote handsets by low-power radio. This permits use of the handset from any location within range of the base. Given that power is required to transmit to the handset, the base station is connected to an electronic power supply. Consequently, cordless phones typically do not function during power outages.

Initially, cordless phones used the 1.7 megahertz (MHz) frequency range to communicate between the base and the handset. Because of quality and range problems, these units were soon superseded by systems that used frequency modulation (FM) at higher frequency ranges—49 MHz, 900 MHz, 2.4 gigahertz (GHz), and 5.8 GHz. The 2.4 GHz cordless phones can interfere with certain wireless "LAN" (local area network) protocols, due to usage of the same frequencies. On the 2.4 GHz band, several "channels" are utilized in an attempt to guard against degradation in the quality of the voice signal due to crowding. The range of modern cordless phones is normally on the order of a few hundred meters.

Most modern mobile phone systems are cell-structured. Radio waves are used to communicate between a handset and nearby cell sites. When a handset gets too far from a cell site, a computer system commands the handset and a closer cell site to take up the communications on a different channel without interrupting the call.

Radio frequencies are a limited, shared resource. The higher frequencies used by cell phones have advantages over short distances. Connection distance is somewhat predictable and can be controlled by adjusting the power level. By using just enough power to connect to the "nearest" cell site, phones using one cell site will cause almost no interference with phones using the same frequencies on another cell site. The higher frequencies also work well with various forms of multiplexing, which allows more than one phone to connect to the same tower with the same set of frequencies.

To establish communications from remote locations and disaster zones, where constructing a cell network would be too unprofitable or difficult, some mobile telephones are set up to communicate directly with an orbiting satellite. Such devices tend to be bulkier than cell-based mobile phones, as they require a large antenna or satellite dish for communicating with the satellite, but they do not require ground-based transmitters.

Some kinds of cordless phones work like cellular phones but only within a small private network covering a building or group of buildings. These kinds of systems, using VoIP, are popular in hospitals and factories where the same wireless network can be used for both data and voice.

"Phreaking" is a slang term coined to describe the activity of a subculture of people who study, experiment with, and exploit telephone systems for the sake of hobby or utility. The term "phreak" is a portmanteau of the words "phone" and "freak." It may also refer to the use of various audio frequencies to manipulate a phone system. Phreaking is often considered similar to computer hacking, and they are sometimes grouped together as the "H/P culture" (for Hacking and Phreaking culture). 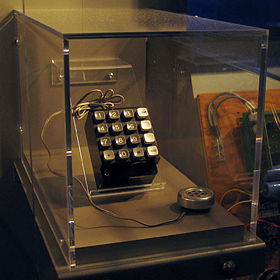 The blue box previously owned by Steve Wozniak, on display at the Computer History Museum

Early phreaks, such as Joybubbles (Joe Engressia), started developing a rudimentary understanding of how the phone system works. Joybubbles taught himself to whistle a tone (2600 hertz) that would cause a trunk line to reset itself. John Draper discovered, through his friend Joybubbles, that the free whistles given out in Cap’n Crunch cereal boxes made exactly a 2600-Hz tone when blown. This allowed control of phone systems that worked on "single-frequency" (SF) controls. One could produce a long whistle to reset the line, and then dial with groups of whistles (a short one for a "1"; two short ones for a "2"; and so on). This was the predecessor of "multi-frequency" (MF) controls, or "MFing," which became common after the Bell System (in 1964) released the frequencies of tones in a technical journal.

An early phreaking tool was the "blue box," an electronic device that simulates a telephone operator's dialing console. It functioned by replicating the tones used to switch long-distance calls and using them to route the user's own call, bypassing the normal switching mechanism. The blue box was typically used to get free telephone calls. The blue box got its name because the first device confiscated by Bell System security was in a blue plastic case. These devices were not just the domain of "pranksters" and "explorers"; others (such as the Mafia) used them to make free phone calls for criminal purposes. Blue boxes no longer work in most western nations, as the switching system is now digital and involves "out-of-band signaling" that cannot be accessed from the line a person is using [3].

"War dialing" (or wardialing) refers to the act of using a modem to dial every telephone number in a local area to find out where computers may be available, then attempting to access them by guessing passwords. The name for this technique refers to the 1983 film WarGames, in which the protagonist programs his computer to dial every telephone number in Sunnyvale, California, to find other computer systems. The technique itself predates the film, but the term "war dialing" gained rapid popularity in the computing culture [3].

In a related technique, called "demon dialing," a computer was programmed to repeatedly dial a number (usually to a crowded modem pool) in an attempt to gain access immediately after another user had hung up. The terms demon dialing and war dialing are sometimes used synonymously.

A more recent phenomenon is "war driving," involving the search for Wi-Fi wireless networks from vehicles on the road. War driving was named after war dialing, as both techniques involve brute-force searches to find computer networks.

Some additional equipment and components of telephone systems