In regular usage, the term sound is applied to any stimulus that excites our sense of hearing. The cause of sound is vibratory movement from a disturbance, communicated to the ear through a medium such as air. Scientists group all such vibratory phenomena under the general category of "sound," even when they lie outside the range of human hearing. The scientific study of sound is known as acoustics.

We depend on sound for communication through speech and artistic expression through music. Our ability to hear sounds provides us with an important mode of perception of our environment. Certain sounds of nature and music have the power to calm the mind and heal the body. Extremely loud noises, on the other hand, can damage our sense of hearing.

Through the development of technology, sound waves can be converted to electrical signals and radio waves and transmitted almost instantaneously to distant parts of the globe. In addition, sounds can be amplified, modified, stored, and replayed at will. Ultrasound (high-frequency sound) is used to generate images of a fetus or a person's internal organs, and to inspect materials for possible flaws. The technology of sonar, based on underwater sound propagation, is useful for detecting icebergs, marine life, and ocean-going vessels.

Solids, liquids, and gases are all capable of transmitting sound. For example, the practice of putting one's ear to the ground to listen for an approaching train is based on the fact that solids can transmit sound. Likewise, one can hear sounds when one's head is submerged in a swimming pool, thus demonstrating the ability of a liquid to carry sound. The matter that supports the transmission of sound is called the medium.

Sound is transmitted by means of sound waves, much as a pebble thrown into a lake generates waves on the surface of the water. In air, a sound wave is a disturbance that creates a region of high pressure (compression) followed by one of low pressure (rarefaction). These variations in pressure are transferred to adjacent regions of the air in the form of a spherical wave radiating outward from the disturbance. Sound is therefore characterized by the properties of waves, such as their frequency, wavelength, period, amplitude, and velocity (or speed).

The properties of a sound wave depend upon the springiness, or elasticity, of the material that the sound travels through. In a gas, stresses and strains are manifested as changes in pressure and density. The movement of a sound wave is accompanied by the transmission of energy that is spread over the spherical wave front.

The term noise is usually applied to an unwanted sound. In science and engineering, noise is an undesirable component that obscures a signal. On the other hand, noises can also be useful at times. For instance, a noisy car engine warns the driver of engine trouble; a noisy infant is calling for attention.

Language is communicated primarily though sound. Oral tradition was the earliest means of recording human history. In addition, the oldest artifacts of human civilization include musical instruments such as the flute. The design of musical instruments requires an understanding of the manner in which sound is created and transmitted, and a knowledge of materials and their acoustical characteristics. Certain naturally occurring and artificially produced sounds can soothe or stimulate the mind and help heal the body. 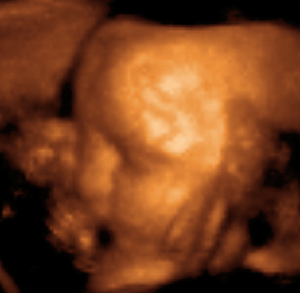 This image of a baby in its mother's womb, at age 29 weeks, was obtained by "3D ultrasound"

Ancient societies constructed amphitheaters designed to carry the sounds of actors' voices to the audience, requiring knowledge of acoustics. Modern performance spaces offer challenges similar to those that faced the ancients. Modern sound technology is closely intertwined with the electronics industry, which has perfected a multitude of ways to convey and reproduce sound electronically.

The telephone, one of the earliest technologies developed for rapid communication, translates sound waves into electrical impulses that are converted back into sound waves at the receiving end. Recording devices store sound wave information, such as conversations or musical performances, by translating them into a mechanical or electronic form that can be used to reconstitute the original sound.

An amplifier takes a sound of weak amplitude and generates an equivalent one with greater amplitude that can be heard more easily. Microphones and sound systems make use of this technology.

Sound can also be used to acquire information about objects at a distance or otherwise hidden from sight. For example, ships and submarines use sonar to detect icebergs, fish, and other objects in the water. Also, a medical imaging technique called sonography uses ultrasound (high-frequency sound waves) to visualize a developing fetus or a patient's internal organs. In industry, ultrasound is a useful means to detect flaws in materials.

Humans and many animals use their ears to hear sound, but loud sounds and low-frequency sounds can be perceived by other parts of the body as well, through the sense of touch. The range of frequencies that humans can hear is approximately between 20 and 20,000 hertz (Hz). This range constitutes the audible spectrum, but it varies from one individual to the next and generally shrinks with age, mostly in the upper part of the spectrum. Some people (particularly women) can hear above 20,000 Hz. The ear is most sensitive to frequencies around 3,500 Hz. Sounds above 20,000 Hz are classified as ultrasound; sounds below 20 Hz, as infrasound.

The amplitude of a sound wave is specified in terms of its pressure, measured in pascal (Pa) units. As the human ear can detect sounds with a very wide range of amplitudes, sound pressure is often reported in terms of what is called the sound pressure level (SPL) on a logarithmic decibel (dB) scale.

Prolonged exposure to a sound pressure level exceeding 85 dB can permanently damage the ear, sometimes resulting in tinnitus and hearing impairment. Sound levels in excess of 130 dB are considered above of what the human ear can withstand and may result in serious pain and permanent damage. At very high amplitudes, sound waves exhibit nonlinear effects, including shock.

The mathematical equation to calculate the sound pressure level (Lp) is as follows.

The speed of sound has been a subject of study since the days of the philosopher Aristotle (384–322 B.C.E.). In his writings, Aristotle discussed the time lapse between the sighting of an event and detection of the sound it produces. A cannon, for example, will be seen to flash and smoke before the sound of the explosive powder reaches an observer.

The speed at which sound travels depends on the medium through which the sound waves pass, and is often quoted as a fundamental property of the material. The speed of sound in air or a gas increases with the temperature of the gas. In air at room temperature, the speed of sound is approximately 345 meters per second (ms-1); in water, 1,500 m/s-1; and in a bar of steel, 5,000 m/s-1.

Based on the dynamic properties of matter, Isaac Newton (1642-1727) derived a mathematical expression for the speed of sound waves in an elastic or compressible medium. For a gas, this expression reduces to:

This formula, however, yields a number that is short of the true velocity. The formula was improved upon by eighteenth-century mathematician-physicist Pierre-Simon Laplace (1749-1827), who took into consideration the temperature effects of the compression of the air at the front of a sound wave and derived the following equation:

where γ is a constant that depends on the heat-retaining properties of the gas.

Acoustics is a branch of physics that studies sound, or more precisely, mechanical waves in gases, liquids, and solids. A scientist who works in the field of acoustics is called an acoustician. The application of acoustics in technology is called acoustical engineering.

...the primary task of modern physical acoustics is to effect a fusion of the principles normally adhering to other sciences into a coherent basis for understanding, measuring, controlling, and using the whole gamut of vibrational phenomena in any material.

The following are the main subdisciplines of acoustics.[1]