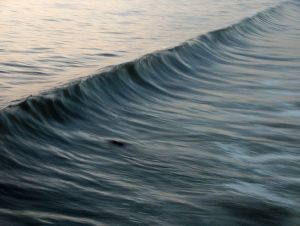 A wave just before breaking at Manhattan Beach, California.

A wave is a disturbance that propagates through space in a regular pattern, often involving the transfer of energy. When thinking about waves, a person tends to recall ocean waves or ripples on a pond. Scientists have found that sound and light (electromagnetic radiation) can also be described in terms of wave motion. Sound involves mechanical waves that propagate as vibrations through a medium, such as a solid, liquid, or gas. By contrast, light can travel through a vacuum, that is, without a medium. In addition, the movement of subatomic particles also has wavelike properties. Thus a wide range of physical phenomena can be understood in terms of wave motion.

Waves can be represented by simple harmonic motion.

Examples of waves include:

Moreover, Albert Einstein's theory of General Relativity predicts the existence of gravitational waves, which are fluctuations in the gravitational field. These waves, however, have yet to be observed empirically. 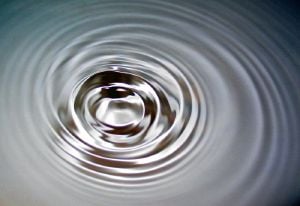 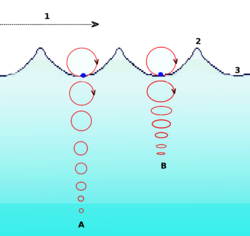 A = At deep water.
B = At shallow water. The circular movement of a surface particle becomes elliptical with decreasing depth.
1 = Progression of wave
2 = Crest
3 = Trough

Ripples on the surface of a pond are actually a combination of transverse and longitudinal waves, and the points on the surface follow orbital paths. Thus, when an object bobs up and down on ripples in a pond, it experiences an orbital trajectory.

All waves exhibit certain types of behavior depending on the situation, as follows:

Thus, by understanding the concept and behavior of waves, we can explain the properties of sound, electromagnetic radiation, subatomic particles, and so forth.

Parameters of a wave

A wave can be described mathematically using a series of parameters including its amplitude, wavelength, wavenumber, period, and frequency.

The amplitude of a wave (commonly denoted as A or another letter) is a measure of the maximum disturbance in the medium during one wave cycle. In the illustration to the right, this is the maximum vertical distance between the baseline and the wave. The units for measuring amplitude depend on the type of wave. Waves on a string have an amplitude expressed in terms of distance (meters); sound waves, as pressure (in pascals); and electromagnetic waves, as the amplitude of the electric field (in volts/meter). The amplitude may be constant, in which case the wave is called a continuous wave (c.w.), or it may vary with time or position. The form of variation of amplitude is called the envelope of the wave.

The wavelength (denoted as

) is the distance between two successive crests (or troughs). It is generally measured on the metric scale (in meters, centimeters, and so on). For the optical part of the electromagnetic spectrum, wavelength is commonly measured in nanometers (one nanometer equals a billionth of a meter).

, can be associated with the wavelength by the relation

, of a wave is the time taken for a wave oscillation to go through one complete cycle (one crest and one trough). The frequency

) is the number of periods per unit time. Frequency is usually measured in hertz (Hz), which corresponds to the number of cycles per second. The frequency and period of a wave are reciprocals of each other. Thus their mathematical relationship is:

radians—in other words, one cycle is completed and another is about to begin. Thus there is another parameter called angular frequency (or angular speed),

. It is measured as the number of radians per unit time (radians per second) at a fixed position. Angular frequency is related to the frequency by the equation:

There are two types of velocity associated with a wave: phase velocity and group velocity. Phase velocity gives the rate at which the wave propagates. It is calculated by the equation:

Group velocity gives the rate at which information can be transmitted by the wave. In scientific terms, it is the velocity at which variations in the wave's amplitude propagate through space. Group velocity is given by the equation:

Interference based on phases of waves 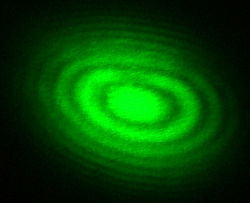 . This is known as constructive interference.

On the other hand, if the same two waves are 180° out of phase when superimposed (that is, the crests of one wave exactly overlap the troughs of the other), the resultant waveform will have an amplitude of zero. This is known as destructive interference.

Constructive and destructive interference are illustrated below.

The medium that carries a wave is called the transmission medium. It can be classified into one or more of the following categories:

The speed (v) of a wave traveling along a string is directly proportional to the square root of the tension (T) over the linear density (ρ):

Traveling waves have a disturbance (amplitude

) that varies with both time (

). This can be expressed mathematically as:

is the amplitude envelope of the wave,

is the wave number, and

is the phase of the wave.

The wave equation is a differential equation that describes how a harmonic wave changes over time. The equation has slightly different forms, depending on how the wave is transmitted and the medium it is traveling through. For a one-dimensional wave traveling down a rope along the

) (which generally depends on both x and t), the wave equation is:

In three dimensions, the equation becomes:

It should be noted that the velocity (

) depends on both the type of wave and the medium through which it is being transmitted.

A general solution for the wave equation in one dimension was given by French physicist-mathematician Jean Le Rond d'Alembert (1717-1783). It is

This can be viewed as two pulses travelling down a taut rope in opposite directions; F in the +x direction, and G in the -x direction. If we substitute for x above, replacing it with directions x, y, z, we then can describe a wave propagating in three dimensions.

In quantum mechanics, the Schrödinger equation describes the wavelike behavior of subatomic particles. Solutions of this equation are wave functions that can be used to describe the probability density of a particle. Quantum mechanics also describes particle properties that other waves (such as light and sound) have on the atomic and subatomic scales.