Infrared (IR) is a term used for radiation in a particular, invisible region of the electromagnetic spectrum, namely, between wavelengths slightly longer than that of visible red light and wavelengths slightly shorter than that of microwave radiation. The name (from the Latin word infra, meaning "below") means "below red." In numerical terms, IR radiation spans wavelengths between approximately 750 nanometers (nm) and 1 millimeter (mm). IR radiation is useful for many applications, such as imaging of objects in the dark or through smoke; heating saunas and de-icing aircraft wings; short-range communications; and spectroscopic analysis of organic compounds.

The discovery of infrared radiation is commonly ascribed to the astronomer William Herschel, in the early nineteenth century. When Herschel used a prism to refract light from the Sun, he detected infrared radiation, beyond the red part of the spectrum, through an increase in temperature recorded on a thermometer.

Infrared radiation is popularly known as heat radiation. It should be noted, however, that IR radiation is a secondary effect of heat—it is not heat itself. Heat is a measure of translational energy (the energy of movement) of atoms and molecules of matter. "Thermal" sensors do not actually detect heat but they detect differences in IR radiation from objects.

Many physics teachers traditionally attribute all the heat from the Sun to infrared light. This is inexact—visible light from the Sun accounts for 50 percent of the heating, and electromagnetic waves of any frequency will have a detectable heating effect if they are intense enough. It is true, however, that objects at room temperature will emit heat mostly in the mid-infrared band (see black body).

The Earth as an infrared emitter

The Earth's surface and clouds absorb visible and invisible radiation from the Sun and re-emit much of the energy as infrared back to the atmosphere. Certain substances in the atmosphere, chiefly cloud droplets and water vapor—but also carbon dioxide, methane, nitrous oxide, sulfur hexafluoride, and chlorofluorocarbons—absorb this infrared and re-radiate it in all directions, including back to Earth. In this manner, the "greenhouse effect" keeps the Earth's surface and atmosphere much warmer than if the infrared absorbers were absent from the atmosphere.

IR radiation is often subdivided into narrower regions of the spectrum. The wavelength ranges according to the German Institute for Standardization (Deutsches Institut für Normung, DIN) are as follows:

This classification scheme, however, is not used universally. For instance, some studies use the following subdivisions: near IR (0.75–5 µm); mid IR (5–30 µm); and long IR (30–1,000 µm). Especially at the wavelengths used for telecommunications, the spectrum is further subdivided into individual bands, because of the limitations of detectors, amplifiers, and sources.

Plot of atmospheric transmittance in part of the infrared region.

The common system of nomenclature is justified by human responses to IR radiation. Near IR is the region closest in wavelength to the radiation detectable by the human eye, mid and far IR are progressively farther from the visible region of the spectrum. Other definitions follow different physical mechanisms (such as emission peaks and water absorption), and the newest follow technical reasons, based on the sensitivity of detectors used. For instance, common silicon detectors are sensitive to about 1,050 nm, while the sensitivity of indium gallium arsenide starts around 950 nm and ends between 1,700 and 2,200 nm. (International standards for these specifications are currently not available.)

The boundary between visible and infrared light is not precisely defined. The human eye is markedly less sensitive to red light above 700 nm wavelength, but particularly intense light (such as from lasers) can be detected up to approximately 780 nm. The onset of infrared is defined (according to different standards) at various values between these two wavelengths, typically at 750 nm.

Optical telecommunication in the near infrared is technically often separated into different frequency bands because of availability of light sources, transmitting/absorbing materials (fibers), and detectors.

Thermography, or thermal imaging, is a type of infrared imaging of objects. Because all objects emit IR radiation, and the amount of radiation emitted increases with temperature, it is possible to use specialized cameras (with IR sensors) to detect this radiation (and variations in the radiation) and produce images of objects. In the case of very hot objects in the near IR or visible region, this technique is called pyrometry.

Thermography does not depend on illumination of objects with visible light. Consequently, it is possible to "see" the environment even in the dark. In particular, warm objects—including humans and warm-blooded animals—stand out well against cooler backgrounds.

Historically, thermography has been extensively used by military and security services. In addition, it is useful for a variety of other purposes. For example, firefighters use it to see through smoke, find persons, and localize hotspots of fires. Technicians who maintain power lines can locate overheating joints and parts, a telltale sign of their failure, to eliminate potential hazards. If thermal insulation becomes faulty, building construction technicians can see heat leaks, to improve the efficiencies of cooling or heating. Thermal imaging cameras are also installed in some luxury cars to aid the driver. Some physiological responses in humans and warm-blooded animals can also be monitored with thermographic imaging.[1]

The appearance and operation of a modern thermographic camera is often similar to that of a camcorder. Enabling the user to see in the infrared spectrum is a function so useful that the ability to record the images is often optional. A recording module is therefore not always built-in. 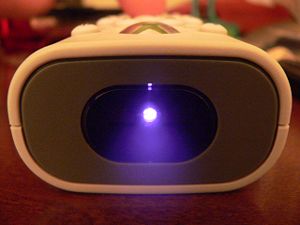 Infared light from the LED of a remote control as seen by a digital camera.

In infrared photography, infrared filters are used to capture the near-infrared spectrum. Digital cameras often use infrared blockers. Cheaper digital cameras and some camera phones that do not have appropriate filters can "see" near-infrared, appearing as a bright white color. This is especially pronounced when taking pictures of subjects near IR-bright areas (such as near a lamp), where the resulting infrared interference can wash out the image.

It is also worth mentioning "T-ray" imaging, which is imaging using far infrared or terahertz radiation. Lack of bright sources makes terahertz photography technically more challenging than most other infrared imaging techniques.

Infrared radiation is used for various heating purposes, such as for heating saunas and removing ice from the wings of aircraft. It is gaining popularity as a method of heating asphalt pavements in place during new construction, or in repairing damaged asphalt. It can also be used in cooking and heating food.

IR wavelengths can be used to transmit data in short-range communications, such as between computer peripherals and personal digital assistants. These devices usually conform to standards published by the Infrared Data Association (IrDA).

Infrared communications devices are useful for indoor use in areas of high population density. IR is the most common way for remote control devices to command appliances. This radiation does not penetrate walls and so does not interfere with other devices in adjoining rooms. Moreover, IR lasers are used to provide light for optical fiber communications systems.

Infrared radiation spectroscopy is a technology used to find out the structures and compositions of (mainly) organic compounds, by examining the transmittance of IR radiation through the samples. It is based on the principle that a given compound absorbs certain frequencies of IR radiation, correlated with the stretching and bending of bonds within the molecules of the sample.