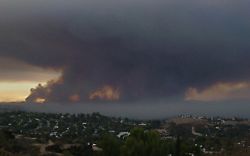 Smoke from a wildfire.

Smoke is the airborne solid and liquid particulates and gases evolved when a material undergoes pyrolysis or combustion, together with the quantity of air that is entrained or otherwise mixed into the mass. It is commonly an unwanted byproduct of fires (including stoves and lamps) and fireplaces, but may also be used for pest control (fumigation), communication (smoke signals), defense (smoke-screen) or inhalation of tobacco or other drugs. Smoke is sometimes used as a flavoring agent and preservative for various foodstuffs. Smoke is also sometimes a component of internal combustion engine exhaust gas, particularly diesel exhaust.

Smoke inhalation is the primary cause of death in victims of indoor fires. The smoke kills by a combination of thermal damage, poisoning and pulmonary irritation caused by carbon monoxide, hydrogen cyanide, and other combustion products. 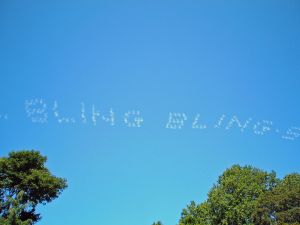 "Bling-bling": Skywriters use smoke to spell.

The composition of smoke depends on the nature of the burning fuel and the conditions of combustion.

Fires with high availability of oxygen burn in high temperature and with small amount of smoke produced; the particles are mostly composed of ash, or in large temperature differences, of condensed aerosol of water. High temperature also leads to production of nitrogen oxides. Sulfur content yields sulfur dioxide. Carbon and hydrogen get completely oxidized to carbon dioxide and water. Fires burning with lack of oxygen produce significantly wider palette of compounds, many of them toxic. Partial oxidation of carbon produces carbon monoxide, nitrogen-containing materials can yield hydrogen cyanide, ammonia, and nitrogen oxides. Content of chlorine (eg. in polyvinyl chloride) or other halogens may lead to production of hydrogen chloride, phosgene, dioxin, and chloromethane, bromomethane, and other halocarbons.

Pyrolysis of the burning material also results in the production of large amounts of hydrocarbons, both aliphatic (methane, ethane, ethylene, acetylene) and aromatic (benzene and its derivates, polycyclic aromatic hydrocarbons; eg. benzo[a]pyrene, studied as a cancerogen, or retene), terpenes. Heterocyclic compounds may be also present. Heavier hydrocarbons may condense as tar.

The visible particles in such smokes are most commonly composed of carbon (soot). Other particulates may be composed of drops of condensed tar, or solid particles of ash. Content of metals yields particles of metal oxides. Particles of inorganic salts may also be formed, like ammonium sulfate, ammonium nitrate. Many organic compounds, typically the aromatic hydrocarbons, may be also adsorbed on the surface of the solid particles.

Some components of smoke are characteristic for the combustion source. Guaiacol and its derivates are products of pyrolysis of lignin and are characteristic for wood smoke; other markers are syringol and derivates, and other methoxy phenols. Retene, a product of pyrolysis of conifer trees, is an indicator of forest fires. Levoglucosan is a pyrolysis product of cellulose. Hardwood vs softwood smokes differ in the ratio of guaiacols/syringols. Markers for vehicle exhaust include polycyclic aromatic hydrocarbons, hopanes, steranes, and specific nitroarenes (eg. 1-nitropyrene). The ratio of hopanes and steranes to elemental carbon can be used to distinguish between emissions of gasoline and diesel engines.[1]

Smoke from oxygen-deprived fires contains a significant amount of compounds that are flammable. A cloud of smoke, in contact with atmospheric oxygen, therefore has the potential of being ignited either by another open flame in the area, or by its own temperature. This leads to effects like backdraft and flashover.

Many compounds of smoke from fires are highly toxic and/or irritant. The most dangerous is carbon monoxide, leading to carbon monoxide poisoning, sometimes with supporting effect of hydrogen cyanide and phosgene. Smoke inhalation can therefore quickly lead to incapacitation and loss of consciousness.

Smoke can obscure visibility, impeding occupant exiting from fire areas. In fact, the poor visibility due to the smoke that was in the Worcester Cold Storage Warehouse fire in Worcester, Massachusetts was the exact reason why the trapped rescue firefighters couldn't evacuate the building in time. Due to the striking similarity that each floor shared, the dense smoke caused the firefighters to become disoriented.

Visible and invisible particles of combustion

Depending on particle size, smoke can be visible or invisible to the naked eye. This is best illustrated when toasting bread in a toaster. As the bread heats up, the products of combustion increase in size. These particles begin as invisible but become visible if the toast is burnt. 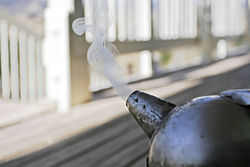 Smoke from a bee smoker, used in beekeeping.

Retrieved from https://www.newworldencyclopedia.org/p/index.php?title=Smoke&oldid=1027373
Categories:
This page was last edited on 17 November 2019, at 01:25.
Content is available under Creative Commons Attribution/Share-Alike License; additional terms may apply. See Terms of Use for details.