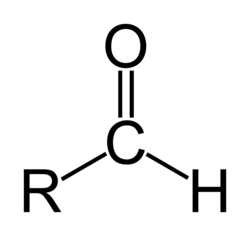 Structure of an aldehyde.
-R is the group attached to the aldehyde group.

An aldehyde is an organic compound containing a terminal carbonyl group. This functional group, called an aldehyde group, consists of a carbon atom bonded to a hydrogen atom with a single covalent bond and an oxygen atom with a double bond. Thus the chemical formula for an aldehyde functional group is -CH=O, and the general formula for an aldehyde is R-CH=O. The aldehyde group is occasionally called the formyl or methanoyl group. Other classes of organic compounds containing carbonyl groups include ketones and carboxylic acids.

The word aldehyde seems to have arisen from alcohol dehydrogenated. In the past, aldehydes were sometimes named after the corresponding alcohols, for example vinous aldehyde for acetaldehyde. (Vinous is from Latin vinum = wine, the traditional source of ethanol; compare vinyl.)

A reaction that introduces an aldehyde group is known as a formylation reaction.

The aldehyde group is polar. Oxygen, more electronegative than carbon, pulls the electrons in the carbon-oxygen bond towards itself, creating an electron deficiency at the carbon atom.

The H atom that is part of the -CH=O group is known as the α-hydrogen atom. This hydrogen atom is more acidic than a hydrogen atom in an alkane (with a typical pKa of 17). This property is explained in terms of what is called "resonance stabilization" of the conjugate base.

There are several methods for preparing aldehydes:

Aldehydes can exist in either the keto or enol tautomers. Keto-enol tautomerism is catalyzed by either acid or base.

In many cases, a water molecule is removed after the addition takes place; in this case, the reaction is classed as an addition-elimination or addition-condensation reaction.

There are various examples of nucleophilic addition reactions.