Alder is the common name for any of the various deciduous trees and shrubs comprising the flowering plant genus Alnus of the birch family (family Betulaceae), characterized by alternate, simple leaves, scaly bark, and flowers as male and female catkins that appear on the same plant, with the woody, cone-like female catkins opening to release the seeds in a similar manner to many conifer cones. The term alder also is used for the wood of these trees.

Alders exhibit bi-level functionality meeting not only their own needs for survival, growth, and reproduction, but also meeting needs within the ecosystem and for humans.

Ecologically, alders are important for fixing atmospheric nitrogen into a usable form for plants, as an early source of pollen for bees, and for erosion control on river banks. Humans use alder wood for making furniture and electric guitar bodies and as the preferred wood for making charcoal. Alder also is commonly used for cooking, being traditionally used for smoking fish and meat, with alder smoking especially common in the Pacific salmon industry in the Pacific Northwest. Humans also gain nutritional, medicinal, and aesthetic benefits from alders.

The Betulaceae, to which alders belong, is known as the "birch family," and includes six genera of deciduous nut-bearing trees and shrubs, including the birches, hazels, hornbeams, and hop-hornbeams. In the past, the family was often divided into two families, Betulaceae (Alnus, Betula) and Corylaceae (the rest); however, recent treatments have renamed these two groups as subfamilies within the Betulaceae—Betuloideae and Coryloideae. Betulaceae is closely related to the beech/oak family, Fagaceae. 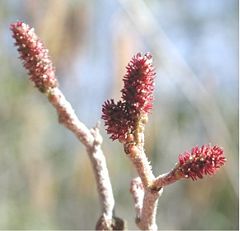 Within the Betulaceae family, the genus Alnus, which comprises the alders, includes about thirty species of monoecious trees and shrubs, few reaching large size. They are distributed throughout the north temperate zone, and in the New World also along the Andes southwards to Chile.

Alder leaves are deciduous (not evergreen), alternate, simple, and serrated. The leaves during autumn leaf-fall lack the bright colors characteristic of many deciduous trees in the north temperate zone. The flowers are catkins with elongate male catkins on the same plant as shorter female catkins, often before leaves appear. The flowers mainly are wind-pollinated, but also visited by bees to a small extent. They differ from the birches (genus Betula) in that the female, dry, cone-like catkins are woody and do not disintegrate at maturity, opening to release the seeds in a similar manner to many conifer cones. 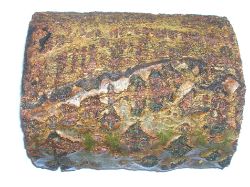 The common name alder is derived from an old Germanic root, and also is found to be the translation of the Old French "verne" for alder or copse of alders. The botanic name Alnus is the equivalent Latin name. Both the Latin and the Germanic words derive from the Proto-Indo-European root el-, meaning "red" or "brown," which is also a root for the English words elk and another tree elm, a tree distantly related to the alders.

The best-known species in Europe is the common or black alder (A. glutinosa), native to most of Europe and widely introduced elsewhere. The largest species is red alder (A. rubra), reaching 35 meters on the west coast of North America, with black alder and Italian alder (A. cordata) both reaching about 30 meters. By contrast, the widespread green alder (A. viridis) is rarely more than a 5 meter shrub.

The genus is divided into three subgenera: 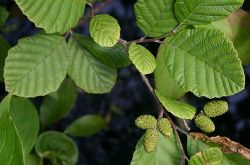 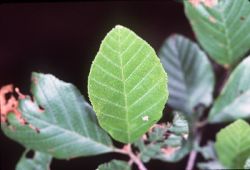 Leaves of the tag alder

Subgenus Alnobetula. Shrubs. Shoot buds not stalked. Male and female catkins produced in late spring (after leaves appear) and expanding and pollinating then. One to four species: 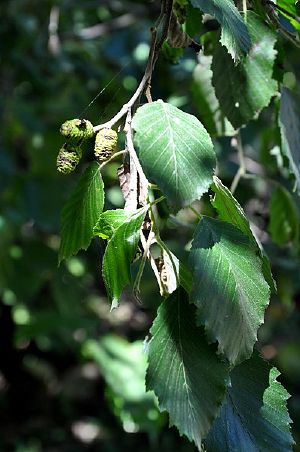 Alder wood, which is fine-textured and durable, is commercially valuable for making furniture, guitars, and charcoal. The red alder, A. rubra, is an important timber hardwood on the North American Pacific coast. Alder is a preferred wood for charcoal making, and is popular as a material for electric guitar bodies. It is used by many guitar makers, notably the Fender Guitar Company, which uses it on top quality instruments, such as the Stratocaster and Jaguar. Alder provides a brighter tone than other woods (such as mahogany), and as alder is not a particularly dense wood it provides a resonant, well-rounded tone with excellent sustain.

Alder is commonly used for cooking. The wood is also traditionally used for smoking fish and meat, though this usage has often been replaced by other woods such as oak and hickory. An exception is the smoked Pacific salmon industry in the Pacific Northwest, where alder smoking is essentially universal. This is partly due to indigenous traditions of food preservation in the area, and partly because oak, hickory, mesquite and other woods favored for smoking elsewhere are not locally available in any large quantities. Species used for Pacific salmon smoking are red alder (A. rubra) and to a lesser extent Sitka alder (A. viridis ssp. sinuata).

Alder formerly was used in the manufacture of gunpowder, or for smelting metal ores. The bark was historically used for dyes and tanning, and remains in use for these purposes.

Alders offer some nutritional and medicinal value. Alder catkins are edible and high in protein. Although they are reported to have a bitter and unpleasant taste, they are best remembered for survival purposes. Native Americans used red alder bark (Alnus rubra) to treat poison oak, insect bites, and skin irritations. Blackfeet Native Americans used an infusion made from the bark of red alder to treat lymphatic disorders and tuberculosis. Recent clinical studies have verified that red alder contains betulin and lupeol, compounds shown to be effective against a variety of tumors (Tilford 1997).

Alders also are grown in gardens and are sometimes made into bonsai. Alders are exceptionally good windbreakers and are planted on the west coast of Scotland to shelter gardens (TFL 2008). 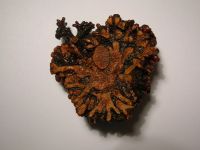 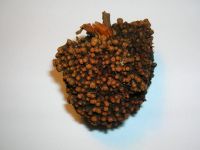 Ecologically, alders provide many benefits, including nitrogen fixation, an early source of pollen for bees, and erosion control on river banks because of their spreading root system.

Their ability to fix atmospheric nitrogen is a result of a symbiotic relationship with the filamentous, nitrogen-fixing actinobacteria Frankiella alni. The bacteria are contained in light brown root nodules, which may be as large as a human fist, with many small lobes. This bacteria converts atmospheric nitrogen into soil-soluble nitrates, which can be utilized by the alder, and favorably enhances the soil fertility generally. Alders benefit other plants growing near them by taking nitrogen out of the air and depositing it in the soil in usable form; fallen alder leaves make very rich compost.

Alder catkins are one of the first sources of pollen for bee species, especially honeybees, which use it for spring buildup. Alders are also used as a food plant by some Lepidoptera (butterfly and moth) species.

Alders can help in pioneering sites that are difficult for growing trees. Alders are sturdy and fast-growing, even in acidic and damaged sites such as burned areas and mining sites. Italian alder is particularly useful on dry, infertile sites. Alders can be used as a producer of simple biomass, growing quickly in harsh environments.