Hazel is the common name for any of the large shrubs and small trees comprising the flowering plant genus Corylus, native to the temperate northern hemisphere and characterized by simple, round leaves with double-serrate margins and fruit in the form of edible nuts, known as hazelnuts. The nuts are surrounded by a leafy husk.

Two European species, the filbert, Corylus maxima, and the common hazel, Corylus avellana, are particularly well-known as cultivated species for their edible nuts. The term filbert sometimes is used to refer to both hazel trees and commercial hazelnuts, although it is more commonly associated with European cultivated species and their nuts. The American hazel, Corylus americana, is a well-known North American species but its hazelnuts do not form a significant commercial industry.

Witch-hazel (genus Hamamelis ) and winter-hazel (genus Distylium), both in the Hamamelidaceae family, are not closely related to hazel.

Hazels offer many values for the ecosystem and for humans. They provide a nutritious food for animals, such as squirrels and birds, who also serve as dispersal agents for reproduction of the plants. Hazels also offer a nutritious and economically important food for people, whether eaten raw, roasted, or ground into a paste, and they are used in confectionary and to produce a hazelnut butter. Furthermore, a number of cultivars of the common hazel and filbert are grown as ornamental plants in gardens. The genus Corylus usually is placed in the birch family Betulaceae (GRIN 2003; Chen et al. 1999; Rushforth 1999; Huxley 1992), though some botanists split the hazels (with the hornbeams and allied genera) into a separate family Corylaceae (Bean 1976; Erdogen and Mehlenbacher 2002).

In the more typical taxonomy, the Betulaceae family includes six genera of deciduous nut-bearing trees and shrubs, including the birches, alders, hazels, hornbeams, and hop-hornbeams, numbering about 130 species. They are mostly natives of the temperate Northern Hemisphere, with a few species reaching the Southern Hemisphere in the Andes in South America. Although the members of this taxa has often been divided into the two families of Betulaceae (Alnus, Betula) and Corylaceae (the rest), recent treatments, including the Angiosperm Phylogeny Group, consider these two groups as subfamilies within the Betulaceae: Betuloideae and Coryloideae. 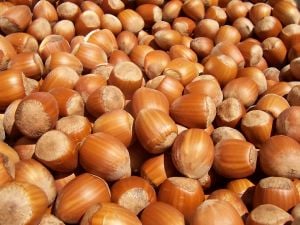 Corylus species, the hazels, have simple, rounded leaves with double-serrate margins. The flowers are produced very early in spring before the leaves, and are monoecious, with single-sex catkins. The male flowers are pale yellow and five to 12 centimeters long, the female very small and largely concealed in the buds, with only the bright red one to three millimeters long styles visible.

The fruits are true nuts one to 2.5 centimeters long and one to two centimeters in diameter, surrounded by an involucre (husk), which partly to fully encloses the nut (Rushforth 1999). As a nut in the botanical sense (versus just a nut in the culinary sense), the hazelnut is a hard, indehiscent (not opening to discharge seeds), simple, dry fruit, whereby the plant's ovary wall becomes very hard (stony or woody) at maturity, and where the seed remains unattached or unfused with the ovary wall. In addition to hazelnuts, examples of such true nuts include acorns, chestnuts, and pecans. The shape and structure of the involucre, and also the growth habit (whether a tree or a suckering shrub), are important in the identification of the different species of hazel (Rushforth 1999). 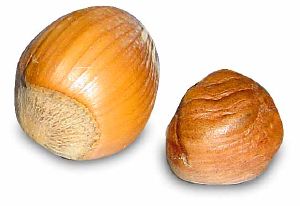 The nuts of all hazels are edible. The common hazel, Corylus avellana, is the species most extensively grown for its nuts, followed in importance by the filbert, Corylus maxima. Nuts are also harvested from the other species, but none are of significant commercial importance (Huxley 1992). Common hazel is cultivated for its nuts in commercial orchards in Europe, Turkey, Iran, and the Caucasus. This hazelnut or cobnut, the kernel or seed, is edible and used raw or roasted, or ground into a paste. The filbert differs from the common hazel in having the nut more fully enclosed by the tubular involucre.

Hazelnuts are rich in protein and unsaturated fat. Moreover, they contain significant amounts of thiamine and vitamin B6, as well as smaller amounts of other B vitamins.

Hazelnuts are extensively used in confectionery to make praline and also used in combination with chocolate for chocolate truffles and products such as Nutella. In the United States, hazelnut butter is being promoted as a more nutritious spread than its peanut butter counterpart, though it has a higher fat content. In Austria and especially in Vienna, hazelnut paste is an important ingredient in the world famous torts (such as Viennese hazelnut tort) that are made there. Vodka-based hazelnut liqueurs, such as Frangelico, are also increasing in popularity. Hazelnut is popular as a coffee flavoring, especially in the form of hazelnut latte.

A number of cultivars of the common hazel and filbert are grown as ornamental plants in gardens, including forms with contorted stems (C. avellana "Contorta," popularly known as "Harry Lauder's walking stick" from its gnarled appearance), those with weeping branches (C. avellana "Pendula"), and with purple leaves (C. maxima "Purpurea"). The common hazel is an important component of the hedgerows that were the traditional field boundaries in lowland England.

The wood was traditionally grown as coppice, the poles cut being used for wattle-and-daub building and agricultural fencing (Rushforth 1999).

There are 14 to 18 species of hazel. The circumscription of species in eastern Asia is disputed, with the Kew Checklist and the Flora of China differing in which taxa are accepted; within this region, only those taxa accepted by both sources are listed below (FBG; FOC; FNA; Rushforth 1999).

The species are grouped as follows:

Several hybrids exist, and can occur between species in different sections of the genus, such as Corylus × colurnoides (C. avellana × C. colurna).