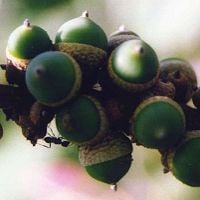 Acorn is the fruit (a nut) of the oak tree (the flowering plant genus Quercus of the beech family Fagaceae). The acorn contains a single seed (rarely two seeds), enclosed in a tough, leathery shell, and borne in a cup-shaped cupule.

The acorn provides an important food resource for many animals, including birds, squirrels, deer, and bear. Reflecting the harmony in nature, many of these same animals also serve as dispersal agents for the acorn, spreading its germination range out beyond the shadow of the parent tree. At one time, the acorn was a dietary staple for the indigenous peoples in North America who were able to leach out the bitter tannins. In southern Europe and parts of Asia, acorns have been ground into a flour used for making bread or flavored jelly.

The acorn also is valued in a symbolic way, as expressed in the proverb "Mighty oaks from little acorns grow," and even "Every majestic oak tree was once a nut who stood his ground." These statements reflect on the potential within people and their ideas. The mighty oak, which grows to an old age of hundreds of years, passing through all the frosts and droughts and adverse conditions, symbolizing greatness and perseverance through trials and hardships, arises from a little acorn. 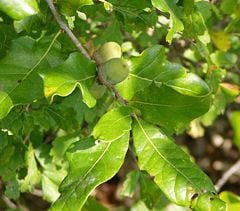 From a botanical sense, the acorn is a true nut. That is, it is a hard, indehiscent (not opening to discharge seeds), simple, dry fruit, whereby the plant's ovary wall becomes very hard (stony or woody) at maturity, and where the seed remains unattached or unfused with the ovary wall.

Acorns vary from one to six centimeters long and 0.8 to four centimeters broad. Acorns take 6 to 24 months (depending on the species) to mature.

Acorns are one of the most important foods for wildlife in areas where oaks occur. Creatures that make acorns an important part of their diet include birds, such as jays, pigeons, some ducks, and several species of woodpeckers. Small mammals that feed on acorns include mice, squirrels, and several other rodents. Such large mammals as pigs, bears, and deer also consume large amounts of acorns: they may constitute up to 25 percent of the diet of deer in the autumn. In some of the large oak forests in southwest Europe, traditionally called "dehesas," pigs are still turned loose in oak groves in the autumn, to fill and fatten themselves on acorns. However, acorns are toxic to some other animals, such as horses.

In some human cultures, acorns once constituted a dietary staple, though they are now generally only a very minor food. In ancient Japan, (Jōmon period), acorn was an important food. They harvested, peeled, and soaked acorns in natural or artificial ponds for several days to remove tannins, then processed it to make acorn cakes. In North America, acorns were a traditional food of many indigenous peoples. (See Native American management of acorn resources.)

The larvae of some moths and weevils also live in young acorns, consuming the kernels as they develop.

Acorns are attractive to animals because they are large and thus efficiently consumed or cached. Acorns are also rich in nutrients. Percentages vary from species to species, but all acorns contain large amounts of protein, carbohydrates, and fats, as well as the minerals calcium, phosphorus, and potassium, and the vitamin niacin. Total food energy in an acorn also varies by oak species, but all compare well with other wild foods and with other nuts.

Acorns also contain bitter tannins, the amount varying with the species. Since tannins, which are plant polyphenols, interfere with an animal's ability to metabolize protein, creatures must adapt in different ways to utilize the nutritional value that acorns contain. Animals may preferentially select acorns that contain fewer tannins. Creatures that cache acorns, such as jays and squirrels, may wait to consume some of these acorns until sufficient groundwater has percolated through them to leach the tannins out. Other animals buffer their acorn diet with other foods. Many insects, birds, and mammals metabolize tannins with fewer ill-effects than humans. Several indigenous human cultures have devised traditional acorn-leaching methods that involved tools and that were traditionally passed on to their children by word of mouth.

Species of acorn that contain large amounts of tannins are very bitter, astringent, and potentially irritating if eaten raw. This is particularly true of the acorns of red oaks. The acorns of white oaks, being much lower in tannins, are nutty in flavor, which is enhanced if the acorns are given a light roast before grinding. Tannins can be removed by soaking chopped acorns in several changes of water, until water no longer turns brown. (Boiling unleached acorns may actually cause the tannins to be unleachable.)

Being rich in fat, acorn flour can spoil or get moldy easily and must be carefully stored. Acorns are also sometimes prepared as a massage oil. 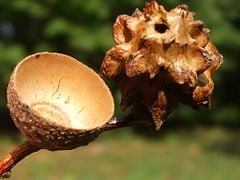 Acorns, being too heavy to blow in wind, do not fall far from the tree at maturity. Because of this, oaks depend on seed dispersal agents to move the acorns beyond the canopy of the mother tree and into an environment in which they can germinate and find access to adequate water, sunlight, and soil nutrients, ideally a minimum of 20-30 meters from the parent tree. Many acorn predators eat unripe acorns on the tree or ripe acorns from the ground, with no reproductive benefit to the oak. However, some acorn predators also serve as seed dispersal agents. Jays and squirrels, which scatter-hoard acorns in caches for future use, effectively plant acorns in a variety of locations in which it is possible for them to germinate and thrive. Although jays and squirrels retain remarkably large mental maps of cache locations and return to consume them, the odd acorn may be lost, or a jay or squirrel may die before consuming all of its stores. A small number of acorns manage to germinate and survive, producing the next generation of oaks.

Scatter-hoarding behavior depends on jays and squirrels associating with plants that provide good packets of food that are nutritionally valuable, but not too big for the dispersal agent to handle. The beak sizes of jays determine how large acorns may get before jays ignore them.

Acorns germinate on different schedules, depending on their place in the oak family. Once acorns sprout, they are less nutritious, as the seed tissue converts to the indigestible lignins that form the root.

Acorns appear only on adult trees, and thus are often a symbol of patience and the fruition of long, hard labor. For example, an English proverb states that Great oaks from little acorns grow, urging the listener to wait for maturation of a project or idea. A German folktale has a farmer try to outwit Satan, to whom he has promised his soul, by asking for a reprieve until his first crop is harvested; he plants acorns and has many years to enjoy first. In Britain, one old tradition has it that if a woman carries an acorn on her person it will delay the aging process and keep her forever young.

The Norse legend that Thor sheltered from a thunderstorm under an oak tree has led to the belief that having an acorn on a windowsill will prevent a house from being struck by lightning, hence the popularity of window blind pulls decorated as acorns.

A motif in Roman architecture and popular in Celtic and Scandinavian art, the symbol is used as an ornament on cutlery, jewelry, furniture, and appears on finials at Westminster Abbey. The Gothic name akran had the sense of "fruit of the unenclosed land." The word was applied to the most important forest produce, that of the oak. Chaucer wrote of "achornes of okes" in the 1300s. By degrees, popular etymology connected the word both with "corn" and "oak-horn," and the spelling changed accordingly.

In the 1600s, a juice extracted from acorns was administered to habitual drunkards to cure them of their condition or else to give them the strength to resist another bout of drinking. Young lovers may place two acorns, representing themselves and the object of their affection, in a bowl of water in order to predict whether they have a future together; if the acorns drift towards each other they are certain to marry. (They will drift together, if placed closer to each other than to the edge of the bowl.)

By analogy with the shape, in nautical language, the word acorn also refers to a piece of wood keeping the vane on the mast-head.

Acorns were a traditional food of many indigenous peoples of North America, but served an especially important role in California, where the ranges of several species of oaks overlap, increasing the reliability of the resource.

Acorns, unlike many other plant foods, do not need to be eaten or processed right away, but may be stored for long time periods, as squirrels do. In years that oaks produced many acorns, Native Americans sometimes collected enough acorns to store for two years as insurance against poor acorn production years. After drying them in the sun to discourage mold and germination, Native American women took acorns back to their villages and cached them in hollow trees or structures on poles, to keep acorns safe from mice and squirrels. These acorns could be used as needed. Storage of acorns permitted Native American women to process acorns when convenient, particularly during winter months when other resources were scarce. Women's caloric contributions to the village increased when they stored acorns for later processing and focused on gathering or processing other resources available in the autumn.

Native North Americans took an active and sophisticated role in management of acorn resources through the use of fire, which increased the production of acorns and made them easier to collect. The deliberate setting of light ground fires killed the larvae of acorn moths and acorn weevils, which have the potential to infest and consume more than 95 percent of an oak's acorns, by burning them during their dormancy period in the soil. Fires released the nutrients bound in dead leaves and other plant debris into the soil, thus fertilizing oak trees while clearing the ground to make acorn collection faster and easier. Most North American oaks tolerate light fires, especially when consistent burning has eliminated woody fuel accumulation around their trunks. Consistent burning encouraged oak growth at the expense of other trees that are less tolerant of fire, thus keeping landscapes in a state in which oaks dominated. Since oaks produce more acorns when they are not in close competition with other oaks for sunlight, water, and soil nutrients, eliminating young oaks more vulnerable to fire than old oaks created open oak savannahs with trees ideally spaced to maximize acorn production. Finally, frequent fires prevented accumulation of flammable debris, which reduced the risk of destructive canopy fires that destroyed oak trees. After a century during which North American landscapes have not been managed by indigenous peoples, disastrous fires have ravaged crowded, fuel-laden forests. Land managers have realized that they can learn much from indigenous resource management techniques, such as controlled burning, widely practiced by Native Americans to enhance such resources as acorns.