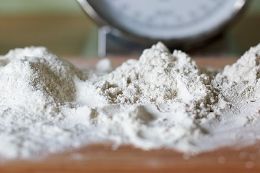 Flour is a finely ground powdery foodstuff obtained by grinding cereal grains or other edible, starchy portions of plants and used chiefly in baking. Flour is most commonly made from wheat and when the word "flour" is used without qualification, it usually implies wheat flour. However, flour also can be made from many other grasses and non-grain plants, such as rye, barley, maize (corn), rice, buckwheat, potatoes, beans, peas, and other foods, such as Australian species of acacia. Ground legumes and nuts, such as soy, peanuts, almonds, and other tree nuts, are also called flours. The same substances ground more coarsely are called "meal" instead of "flour."

Flour is the key ingredient of bread, which is the staple food in many countries, and therefore the availability of adequate supplies of flour has often been a major economic and political issue.

Human creativity is reflected in the production of flour, the many types of flours produced, and the diversity of baked foods that are prepared with flour. The use in breads, cakes, pies and other foods reflects not only people's physical needs (food for survival), but also their inner desire for joy. However, some flour processing methods have been developed that are economical but remove important nutrients. Regulations in many countries require that wheat flour be enriched with vitamins (niacin, riboflavin, thiamine) and iron, if not other nutrients, to replace nutrients lost in the production of refined flour.

Flour always contains a high proportion of starches, which are complex carbohydrates also known as polysaccharides.

Most flour is made from wheat. Wheat flour is one of the most important foods in European and American culture, and is the defining ingredient in most types of breads and pastries. Bread, pasta, crackers, many cakes, and many other foods are made using flour. Wheat flour is also used to make a roux as a base for gravy and sauces. White wheat flour is the traditional base for wallpaper paste. It is also the base for papier-mâché. Cornstarch is a principal ingredient of many puddings or desserts.

Wheat is particularly useful for baking because it contains a large amount of gluten. Gluten is a composite of the proteins gliadin and glutenin. These exist, conjoined with starch, in the endosperms of some grass-related grains, notably wheat, rye, and barley. Gliadin and glutenin comprise about 80 percent of the protein contained in wheat seed. Gluten, which has strong elastic proteins, is what gives wheat dough an elastic structure that allows it to be worked in a variety of ways, and which allows the retention of gas bubbles in an intact structure, resulting in an aerated final product with a soft texture, desirable for breads, cakes and the like.

Specifically, gluten forms a network throughout the dough, and traps gases formed by yeast, baking powder, or other leavening agents (Blanchfield 2002). In this case, the term yeast, which technically is a phylogenetically diverse grouping of single-celled fungi, refers to S. cerevisiae, or "baker's yeast" (Kurtzman 1994). In baking, it acts as a leavening agent, converting the fermentable sugars present in the dough into carbon dioxide. This causes the dough to expand or rise as the carbon dioxide forms pockets or bubbles. When the dough is baked it "sets" and the pockets remain, giving the baked product a soft and spongy texture.

Some people suffer from an intolerance to gluten known as coeliac or celiac disease. Increased awareness of this disorder, as well as a rising belief in the benefits of a gluten-free diet for persons suffering certain other conditions, has led to an increased demand for bread, pasta, and other products made with flours that do not contain gluten.

Production of flour has taken place since prehistoric times (Blanchfield 2002). Earliest methods involved grinding between stones, such as mortar and pestle (stone club and stone bowl) and quern-stones (Blanchfield 2002). Quern-stones were made out of rock, with a horizontal, disk-shaped stone spinning on top of grain laying on top of another horizontal stone (Blanchfield 2002). The lower, stationary, stone is called a quern, while the upper, mobile, stone, which was spun around, is called a handstone. Another form, less useful for producing flour, was the saddle quern, which involved rocking or rolling the handstone using parallel motions (in other words, pushing and pulling the handstone), rather than spinning the top stone on the lower stone.

These methods were generally replaced by millstones once mechanized forms of milling appeared, particularly the water mill and the windmill, although animals were also used to operate the millstones. Millstones consisted of a vertical, disk-shaped stone that rolled onto grain sitting on a horizontal, disk-shaped stone (Blanchfield 2002). The first mill in North America was powered by wind; it was built in Boston in 1632 (Blanchfield 2002).

In history, both large and hand mills were operated. Until modern times, much flour contained minute amounts of grit, either the result of poor sifting of the grain or of grinding stones together. This grit strongly abraded teeth.

Steel-ground flour is produced by huge, high speed steel rollers or hammers, and the heat typically strips away the wheat germ ad destroys nutrients such as vitamins and enzymes (Herbst 2001). Stone-ground flour, which is naturally more nutritious, is produced by grinding the grain between two slowly moving stones (Herbst 2001). Many small appliance mills are available, both hand-cranked and electric.

Flour dust suspended in air is explosive, as is any mixture of a finely powdered flammable substance with air. Some devastating and fatal explosions have occurred at flour mills, including an explosion in 1878 at the Washburn "A" Mill in Minneapolis, the largest flour mill in the United States at the time (MHS 2007). In medieval flour mills, candles, lamps, or other sources of fire were forbidden.

Much more wheat flour is produced than any other flour.

Wheat varieties are called "white," or "brown" if they have high gluten content, and "soft" or "weak flour" if gluten content is low. "Hard flour," or "bread" flour, is high in gluten, with a certain toughness that holds its shape well once baked. Soft flour is comparatively low in gluten and so results in a finer texture. Soft flour is usually divided into "cake flour," which is the lowest in gluten, and "pastry flour," which has slightly more gluten than cake flour.

All-purpose or plain flour
This flour is a blended wheat flour with an intermediate gluten level, which is marketed as an acceptable compromise for most household baking needs. It contains neither the bran nor the germ (Herbst 2001).

Bleached flour
This flour is treated with flour bleaching agents to whiten it (freshly milled flour is yellowish) and to give it more gluten-producing potential. Oxidizing agents are usually employed, most commonly organic peroxides like acetone peroxide or benzoyl peroxide, nitrogen dioxide, or chlorine. A similar effect can be achieved by letting the flour slowly oxidize with oxygen in the air ("natural aging") for approximately 10 days; however, this process is more expensive due to the time required.

Bromated flour
This is a flour with a maturing agent added. The agent's role is to help with developing gluten, a role similar to the flour bleaching agents. Bromate is usually used. Other choices are phosphates, ascorbic acid, and malted barley. Bromated flour has been banned in much of the world, but remains available in the United States.

Cake flour
This is a finely milled flour made from soft wheat. It has very low gluten content, making it suitable for soft-textured cakes and cookies. The higher gluten content of other flours would make the cakes tough.

Pastry flour or cookie flour or cracker flour
This flour has slightly higher gluten content than cake flour, but lower than all-purpose flour. It is suitable for fine, light-textured pastries.

Self-rising or self-raising flour
This is "white" wheat flour or wholemeal flour that is sold premixed with chemical leavening agents. It was invented by Henry Jones. It can also be substituted by Maida when cooking under the Indian Cuisine. Typical ratios are:

Durum or semolina flour
This flour is made of durum wheat. It has the highest protein content, and it is an important component of nearly all noodles and pastas. It is also commonly used to make Indian flatbreads.

In Britain, many flours go by names different than those from America. Some American flours and British equivalents include:

Flour can also be made from soy beans, arrowroot, taro, cattails, acorns, peas, beans, and other non-grain foodstuffs.

In some markets, the different available flour varieties are labeled according to the ash mass ("mineral content") that remains after a sample was incinerated in a laboratory oven (typically at 550 °C or 900 °C). This is an easy to verify indicator for the fraction of the whole grain that ended up in the flour, because the mineral content of the starchy endosperm is much lower than that of the outer parts of the grain. Flour made from all parts of the grain (extraction rate: 100 percent) leaves about 2 grams ash or more per 100 grams dry flour. Plain white flour (extraction rate: 50-60 percent) leaves only about 0.4 grams.

In the United States and the United Kingdom, no numbered standardized flour types are defined, and the ash mass is only rarely given on the label by flour manufacturers. However, the legally required standard nutrition label specifies the protein content of the flour, which is also a suitable way for comparing the extraction rates of different available flour types.

It is possible to find out ash content from some US manufacturers. However, US measurements are based on wheat with a 14 percent moisture content. Thus, a US flour with .48 ash would approximate a French Type 55.

The following table shows some typical examples of how protein and ash content relate to each other in wheat flour:

This table is only a rough guideline for converting bread recipes. Since the American flour types are not standardized, the numbers may differ between manufacturers.