Typha is a genus of perennial herbaceous plants in the Typhaceae family, characterized by long, spongy, strap-like leaves, clusters of minute flowers arranged in a dense, cylindrical spike, and the corresponding minute fruits in the form of a cylindrical, brown, furry spike. These reedy, wind-pollinated marsh plants are are variously known as cattails, bulrushes (or bullrushes), reedmaces (or reed maces), and club rushes. They are common in wetland areas in temperate and cold regions of both Northern and Southern Hemisphere.

Typha plants grow along lake margins and in marshes, often in dense colonies, and are sometimes considered a weed in managed wetlands. However, cattails provide important ecological values. The plants are often home to many insects, amphibians, and birds (such as redwing blackbirds), and some animals, such as muskrats, consume cattails. The disintegrating heads also are used by some birds to line their nests. Cattails along lake margins filter runoff, reducing the flow of nutrients and mud into the lake and the plant's root systems help prevent erosion, thus helping to keep the lake healthy. Longer term, the spread of cattails in some systems is an important part of the process of open water bodies being converted to vegetated marshland and eventually dry land.

Cattails also provide important direct benefits to humans. Many parts of the plant are edible and nutritious, including the rhizomes, bases of the leaves, and pollen. The leaves have been woven into mats, the pulp and fibers made into string and paper, and the cattail down used for stuffing pillows. Cattails can be used to make ethanol, displayed in dried flower arrangements, and grown for ornamental purposes. 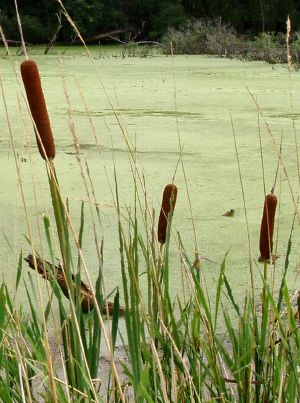 Typha plants at the edge of a small wetland in Indiana.

The Typha genus is placed in the Typhaceae family. The APG II system, of 2003 (unchanged from the APG system, 1998), assigns this family to the order Poales in the clade commelinids, in the monocots. The Cronquist system, of 1981, also recognized such a family and placed it in the order Typhales, in the subclass Commelinidae in class Liliopsida in division Magnoliophyta. While some taxonomies recognize Typhaceae as being monogeneric, including only Typha', some classifications now include the genus Sparganium in Typhaceae, whereas previously it was placed alone in the family Sparganiaceae. Members of Sparganium also are perennial marsh plants and are known as bur-reeds.

About 15 species in the Typha genus have been described (Apfelbaum). These monocotyledonous flowering plants has a largely Northern Hemisphere distribution, but their distribution is essentially cosmopolitan, being found in a variety of wetland habitats in North America, Europe, Asia, Africa, and Australia. These plants are known in British English as bulrush, bullrush, or reedmace (Sterry 2008), and in American English as cattail, punks, or corndog grass. Cattails should not be confused with the bulrush of the genus Scirpus.

Cattails are wetland plants, typically 1 to 7 meters (3-23 feet) tall, with spongy, strap-like leaves and starchy, creeping stems (rhizomes). T. minima is the smallest species, being from 0.5 to 1 meter (1.5-3 feet) in height. The leaves of Typha species are alternate and mostly basal to a simple, jointless stem that eventually bears the flowers. The rhizomes spread horizontally beneath the surface of muddy ground to start new upright growth.

Typha plants are monoecious, wind-pollinated, and bear unisexual flowers developing in dense, complex spikes. (Monoecious means the individual flowers are male or female, but can be found on the same plant.) The male flower spike develops at the top of the vertical stem, above the female flower spike. The male (staminate) flowers are reduced to a pair of stamens and hairs and wither once the pollen is shed, leaving a short, bare stem portion above the female inflorescence. The dense cluster of female flowers forms a cylindrical spike some 10 to as much as 40 centimeters (4-15.7 inches) long and 1 to 4 centimeters (0.4-1.6 inches) broad. Seeds are minute (about 0.2 millimeters long or 0.008 inches), and attached to a thin hair or stalk, which effects wind dispersal. Typha are often among the first wetland plants to colonize areas of newly exposed wet mud. 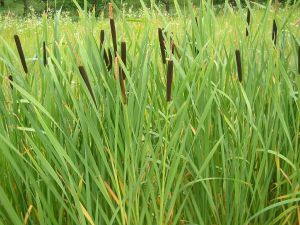 The following are some of the about 15 described species in Typha.

The most widespread species is Typha latifolia, the common cattail, extending across the entire temperate Northern Hemisphere. T. angustifolia is nearly as widespread, and is found throughout the world from the Arctic to latitude 30°S, but is not found in Africa (PFAF 2008). T. domingensis is a more southerly American species, extending from the U.S. to South America, while T. laxmannii, T. minima, and T. shuttleworthii are largely restricted to Asia and parts of southern Europe.

These native cattails are increasingly being supplanted by the invasive purple loosestrife Lythrum salicaria.

Cattail has a wide variety of parts that are edible to humans.

The rhizomes are a pleasant, nutritious, and energy-rich food source, generally harvested from late Fall to early Spring. The rhizomes can be consumed after cooking and removing the skin (Turner 1997). The roots can be quite nutritious, containing more protein than rice and more starch than potatoes (DOE). While starchy, they also are fibrous, so the starch must be scraped or sucked from the tough fibers.

In addition to the rhizomes, cattails have little-known, underground, lateral stems that are quite tasty. In late spring, the bases of the leaves, while they are young and tender, can be eaten raw or cooked. As the flower spike is developing in early summer, it can be broken off and eaten, and in mid-summer, once the flowers are mature, the pollen can be collected and used as a flour supplement or thickener.

The rhizomes of the common cattail (Typha latifolia) were eaten by many Native Americans, as well as the leaf bases and young flower spikes. The roots also have been used for treatment of intestinal disorders and burns (DOE), among other medicinal uses.

Cattail leaves have been woven into mats, chair seats, hats, and furniture and the pulp and fibers made into string and paper.

Native American tribes used cattail down to line moccasins and papoose boards. An Indian name for cattail meant, “fruit for papoose’s bed.” Today some people still use cattail down to stuff clothing items and pillows. If using the cattail for pillow stuffing, it is suggested to use thick batting material, as the fluff may cause a skin reaction similar to urticaria.

The down, which has good buoyancy, has also been used to fill life vests in the same manner as kapok.

Cattails can be used for the creation of ethanol. Furthermore, cattails do not require much, if any, maintenance.

The downy material was also used by Native Americans as tinder for starting fires. Highly flammable, the pollen also is used today in fireworks (PFAF 2008).

Cattails have been cultivated as ornamental pond plants and used in dried flower arrangements. With an extensive root system, they are good for stabilizing banks of rivers and lakes (PFAF 2008).

Retrieved from https://www.newworldencyclopedia.org/p/index.php?title=Typha&oldid=1086964
Categories:
Hidden category:
This page was last edited on 11 November 2022, at 15:57.
Content is available under Creative Commons Attribution/Share-Alike License; additional terms may apply. See Terms of Use for details.