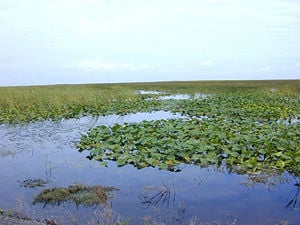 A marsh, or morass, is a type of wetland characterized by being intermittently or continuously flooded with water that is not deep and with predominately soft-stemmed vegetation, such as grasses and sedges, that are adapted to conditions of saturated soil. The water of a marsh can be fresh, brackish, or saline. Like swamps, a marsh generally is considered to be a wetland that does not accumulate substantial peat deposits (NSC 2005).

Elsewhere, a marsh is distinguished from a swamp by being a wetland with less open water surface and shallower water than a swamp.

Historically, marshes have sometimes been treated as "wastelands," along with other wetlands. However, marshes provide important values. They are vital wildlife habitats, often serving as breeding grounds for a wide variety of animal life. Indeed, both freshwater marshes and salt marshes are among the most productive ecosystems on earth. Marshes also recharge groundwater supplies, moderate stream flow, mitigate flooding, and help in purifying the water by filtering excess nutrients (EPA 2006). Indeed, people now are creating marshes to treat agricultural, residential, and commercial wastewater. Tidal marshes also slow erosion along the shoreline and buffer stormy seas (EPA 2006).

Constructed wetlands featuring surface-flow design are usually in the form of a marsh.

A marsh is a type of wetland. A wetland is a transitional environment between permanently aquatic and terrestrial environments that shares characteristics of both environments and where water, which covers the soil or is near the surface for substantial parts of the year, is the key factor in determining the nature of the ecosystem and soil. Although wetlands have aspects similar to both wet and dry environments, they cannot be classified unambiguously as either aquatic or terrestrial (Barbier et al. 1997). In the United States, the four general categories of wetlands, according to the Environmental Protection Agency, are marshes, swamps, bogs, and fens (EPA 2004).

The National Wetlands Research Center of the U.S. Geological Survey defines marshes as "a wetland dominated by grasses" (NWRC 2007).

The Natural Resources Conservation Service of the United States Department of Agriculture defines wetlands as "periodically wet or continually flooded areas with the surface not deeply submerged; covered dominantly with sedges, cattails, rushes, or other hydrophytic plants." (NRCS 2007).

The National Safety Council defines swamps as "a type of wetland that does not accumulate appreciable peat deposits and is dominated by herbaceous vegetation (NSC 2005).

However, although in North America marshes and swamps are usually differentiated based on swamps including a large amount of woody vegetation and marshes mainly soft-stemmed vegetation (EPA 2004; NSC 2005; NRCS 2007), this definition is not universal. Marshes are further distinguished from swamps by having water that is not as deep. There are many types of marshes. Marshes may be freshwater, brackish water, or saltwater, and may be tidal or non-tidal (NSC 2005; EPA 2006).

A tidal marsh is a type of marsh that is found along coasts and estuaries of which the flooding characteristics are determined by the tidal movement of the adjacent estuary, sea, or ocean (EPA 2006). Tidal marshes are found worldwide along protected coastlines in the middle and high latitudes, and in the United States are most prevalent on the eastern coast, from Maine to Florida, and along the Gulf of Mexico (EPA 2006). According to the salinity of the flooding water, freshwater, brackish and saline tidal marshes are distinguished.

A non-tidal marsh lacks the flooding from tidal movement. In North America, non-tidal marshes are the most common and most widely distributed wetlands and are mostly freshwater marshes (EPA 2006). They tend to have highly organic, mineral rich soils of silt, clay, and sand (EPA 2006).

A freshwater marsh occurs along rivers and lakes. A fresh-water marsh's main feature is its openness, with only low-growing or "emergent" plants. It may feature grasses, rushes, reeds, typhas, sedges, and other herbaceous plants (possibly with low-growing woody plants) in a context of shallow water. It is an open form of fen.

A saltwater marsh has high amounts of salinity and is dominated by halophytic (salt tolerant) herbaceous plants, such as Spartina alterniflora (oyster grass). The National Wetlands Research Center of the U.S. Geological Survey defines a saltwater marsh as having a salinity of 15-18 parts per thousand or greater (NWRC 2007). The Natural Resources Conservation Service of the United States Department of Agriculture defines a saltmarsh as a "flat, poorly drained area that is subject to periodic or occasional overflow by salt water, containing water that is brackish to strongly saline, and usually covered with a thick mat of grassy halophytic plants; e.g. a coastal marsh periodically flooded by the sea, or an inland marsh, (or salina) in an arid region and subject to intermittent overflow by salty water" (NRCS 2007). We now know that salt marshes are one of the most biologically productive habitats on the planet, rivaling tropical rain forests.

A brackish marsh and intermediate marsh are characterized by lesser salinities than salt marshes. The National Wetlands Research Center defines brackish marshes as those with a salinity range from three to 15 parts per thousand, dominated by Spartina patens, and an intermediate marsh as a marsh occurring where the salinity is about three parts per thousand, with common plants including bull tongue, roseau cane, and wiregrass (NWRC 2007).

Marshes are generally characterized by very slow-moving waters. They are usually associated with adjacent rivers, lakes, or oceans.

Typically, a marsh features grasses, rushes, reeds, typhas, sedges, and other herbaceous plants (possibly with low-growing woody plants) in a context of shallow water. Saline tidal marshes that are covered and exposed daily by the tide may be covered by the tall form of smooth cordgrass (Spartina alterniflora), while areas covered by water only sporadically may be populated by short smooth cordgrass, spike grass, and black grass (Juncus gerardii) (EPA 2004). Non-tidal marshes may feature lily pads, cattails, reeds, and bulrushes, and such waterfowl and small mammals as great blue herons, otters, muskrats, and red-winged blackbirds (EPA 2004).

A coastal salt marsh may be associated with estuaries and along waterways between coastal barrier islands and the inner coast. The plants may extend from reed in mildly brackish water to salicornia on otherwise bare marine mud. It may be converted to human use as pasture (salting) or for salt production (saltern). The estuarine marsh, or tidal marsh, is often based on soils consisting of sandy bottoms or bay muds. An example is the Tantramar Marsh of eastern Canada.

Below water decomposition processes often produce marsh gas, which may through self-ignition manifest as Will o' the wisps (aka. Jack-a-lanterns or spirites).

Marshes are vital wildlife habitats, often serving as breeding grounds for a wide variety of animal life. Freshwater marshes are one of the most productive ecosystems on earth and sustain a diversity of flora and fauna that is out of proportion with its size (EPA 2006). Salt marshes rival tropical rain forests in productivity.

Marshes also recharge groundwater supplies, moderate stream flow by providing water to streams (very important in cases of drought), mitigate flooding by slowing and storing flood water, and help in purifying the water via removal of sediments and other pollutants (via settling or microbial or plant removal of nutrients and heavy metals) (EPA 2006). Indeed, the ability of marshes to clean polluted waters has led to people now creating marshes to treat agricultural, residential, and commercial wastewater. Tidal marshes slow erosion along the shoreline, buffer stormy seas, and remove pollutants before they enter oceans and estuaries (EPA 2006).

Loss of marshes has often been followed by severe flooding and nutrient deposition into bodies of water (EPA 2006).