A salt marsh, or saltmarsh, is a type of marsh (itself a type of wetland) that is characterized by being frequently or continuously flooded by relatively shallow, high salinity water and that is dominated by halophytic (salt tolerant) herbaceous plants. It is distinguished from brackish marshes and freshwater marshes by having a higher level of salinity. The National Wetlands Research Center of the United States Geological Survey defines a saltwater marsh as having a salinity of 15-18 parts per thousand or greater (NWRC 2007), but other definitions may be less precise.

Although historically, salt marshes sometimes have been treated as "wastelands," along with other wetlands, they offer important values. We now know that salt marshes are one of the most biologically productive habitats on the planet, rivaling tropical rainforests. They also slow erosion along the shoreline, buffer stormy seas, and help to filter out pollutants before they enter oceans and estuaries. Whereas in the past substantial areas of saltmarsh have been altered for agricultural or residential purposes, today there is a growing interest in protecting and restoring salt marshes.

A salt marsh is one type of marsh, and thus is a type of wetland. A wetland is a transitional environment between permanently aquatic and terrestrial environments that shares characteristics of both environments and where water, which covers the soil or is near the surface for substantial parts of the year, is the key factor in determining the nature of the ecosystem and soil. Although wetlands have aspects similar to both wet and dry environments, they cannot be classified unambiguously as either aquatic or terrestrial (Barbier et al. 1997). A marsh is a type of wetland characterized by being intermittently or continuously flooded with water that is not deep and with predominately soft-stemmed vegetation, such as grasses and sedges, that are adapted to conditions of saturated soil. The water of a marsh can be fresh, brackish, or saline. A marsh is distinguished from a swamp by having less open water surface and shallower water than a swamp, and generally by a swamp having more woody plants, while a marsh is dominated by soft-stemmed plants. 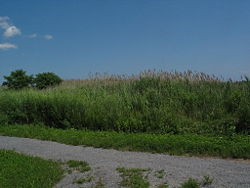 A salt marsh is one of many classifications of marshes, which also include freshwater marshes and brackish marshes, as well as the larger classification of tidal marshes, and non-tidal marshes (NSC 2005; EPA 2006). A tidal marsh is a type of marsh that is found along coasts and estuaries of which the flooding characteristics are determined by the tidal movement of the adjacent estuary, sea, or ocean (EPA 2006). A non-tidal marsh lacks the flooding from tidal movement. According to the salinity of the flooding or non-flooding water, one can distinguish freshwater, brackish, and saline marshes.

A saltwater marsh has high amounts of salinity and is dominated by halophytic (salt tolerant) herbaceous plants, such as Spartina alterniflora (oyster grass). The National Wetlands Research Center of the U.S. Geological Survey defines a saltwater marsh as having a salinity of 15-18 parts per thousand (ppt) or greater, with a brackish marsh having a salinity range from 3-15 ppt, and an intermediate marsh with a salinity about three ppt. Freshwater marshes have even less salinity.

The Natural Resources Conservation Service of the United States Department of Agriculture defines a salt marsh as a "flat, poorly drained area that is subject to periodic or occasional overflow by salt water, containing water that is brackish to strongly saline, and usually covered with a thick mat of grassy halophytic plants; e.g. a coastal marsh periodically flooded by the sea, or an inland marsh, (or salina) in an arid region and subject to intermittent overflow by salty water" (NRCS 2007).

Salt marshes typically develop on depositional coasts, bays, and estuaries where tidal action is relatively gentle and erosion no more than intermittent and light enough to allow vegetation to take hold. They are common on low-energy coasts such as estuaries, enclosed bays, and the land sides of barrier islands and strips. 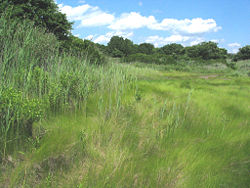 Plant species diversity is relatively low, since the flora must be tolerant of salt, complete or partial submersion, and anoxic mud substrate. The most common salt marsh plants are glassworts (Salicornia spp.) and the cord grasses (Spartina spp.), which have worldwide distribution. They are often the first plants to take hold in a mudflat and begin its ecological succession into a salt marsh. Their shoots lift the main flow of the tide above the mud surface, while their roots spread into the substrate and stabilize the sticky mud and carry oxygen into it so that other plants can establish themselves as well. Plants such as sea lavenders (Limonium spp.), plantains (Plantago spp.), and varied sedges and rushes grow once the mud has been vegetated by the pioneer species.

Saline tidal marshes that are covered and exposed daily by the tide may be covered by the tall form of smooth cordgrass (Spartina alterniflora), while areas covered by water only sporadically may be populated by short smooth cordgrass, spike grass, and black grass (Juncus gerardii) (EPA 2004).

The flora of a salt marsh is differentiated into levels according to the plants' individual tolerance of salinity and water table levels. Vegetation found in the water must be able to survive high salt concentrations, periodical submersion, and a certain amount of water movement, while plants further inland in the marsh can sometimes experience dry, low-nutrient conditions.

Salt marshes are quite photosynthetically active and are extremely productive habitats. They serve as depositories for a large amount of organic matter, and are full of decomposition, which feeds a broad food chain of organisms, from bacteria to mammals. Interestingly (in such a biologically productive biome), many of the halophytic plants such as cordgrass are not grazed at all by higher animals, but die off and decompose, to become food for microorganisms, which in turn become food for fish and, in turn, birds. 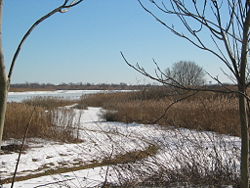 A salt marsh in the Marine Park Nature Center in Brooklyn, New York, after a snow melt.

In wintertime in colder climates, the saltmarsh looks more open than in summer. More space is seen between reeds as snow falls between them. The water partly freezes, which makes it look rather spectacular.

In warmer climates, salt can be produced by solar energy so that the French equivalent of the salt marsh, the marais salant has come to be envisaged primarily as an industrial plant, though classified as a form of agriculture, known in French as saliculture.

Historically, salt marshes have sometimes been treated as "wastelands," along with other wetlands. We now know that salt marshes are one of the most biologically productive habitats on the planet, rivaling tropical rainforests. This is partly due to the daily tidal surges that bring in nutrients, the natural chemical activity of salty (or brackish) water, the tendency of nutrients to settle in roots of the plants there, and the tendency of algae to bloom in the shallow unshaded water. 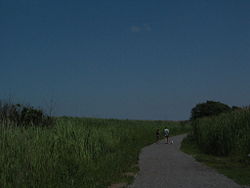 A walkway for people over a salt marsh.

Salt marshes also provide a benefit by protecting against severe weather, such as in the North American Gulf Coast. Tidal marshes slow erosion along the shoreline and buffer stormy seas (EPA 2006). They also help to filter pollutants before they enter oceans and estuaries, either by settling of sediments or microbial and plant removal of nutrients and other substances.

In the past, substantial areas of saltmarsh have been reclaimed as agricultural land and for urban development, but in the United States and Europe they are now accorded a high level of protection by the Clean Water Act and the Habitats Directive respectively. There is growing interest in restoring salt marshes, through a process of managed retreat.

Retrieved from https://www.newworldencyclopedia.org/p/index.php?title=Salt_marsh&oldid=682912
Categories:
Hidden category:
This page was last edited on 2 April 2008, at 15:50.
Content is available under Creative Commons Attribution/Share-Alike License; additional terms may apply. See Terms of Use for details.