Lütt-Witt Moor, a bog in Henstedt-Ulzburg in northern Germany.

A bog is a freshwater wetland characterized by acidic peat deposits and by moisture provided by precipitation (rain and snow) rather than groundwater or interior drainage. The precipitation leaches nutrients from the soil, while acid is produced from the decomposing organic material (Finlayson and Moser 1991). The United States Environmental Protection Agency (EPA) considers the bog one of the four general categories of wetlands, the others being marshes, swamps, and fens (EPA 2004), although categorization of wetlands varies widely.

Bogs provide many ecological, commercial, archaeological, and recreational benefits. As a unique habitat, they serve as a biogenetic reservoir for many rare and protected plant and animal species. They are a source of peat, which can be dried and burned as an energy source and alternatively used as a soil amendment. Bogs are also a very early stage in the formation of coal deposits. Bogs serve as a carbon store, and afford aesthetic enrichment and renewal. Archaeologically, they have been known to preserve mammalian bodies extremely well for millennia.

Despite these valuable aspects of bogs, many people consider them to be wastelands that can better be converted to some "useful" purpose, such as reclaimed land for intensive agricultural or residential use. Many bogs have been lost, including an estimated 94 percent of the original bogs in the United Kingdom (RSPB 2007).

A bog is a type of wetland. A wetland is a transitional environment between permanently aquatic and terrestrial environments that shares characteristics of both environments and where water, which covers the soil or is near the surface for substantial parts of the year, is the key factor in determining the nature of the ecosystem and soil. Although wetlands have aspects similar to both wet and and dry environments, they cannot be classified unambiguously as either aquatic or terrestrial (Barbier et al. 1997).

A bog is a wetland type that accumulates acidic peat. Peat is the dark, fibrous accumulation of partially decomposed and disintegrated organic matter found in wet areas, usually residues of plants such as mosses, but also including sedges, trees, and other plant and even animal matter. It is generally light and spongy in consistency and dark brown or black in color. Many North American bogs are characterized by Sphagnum moss. 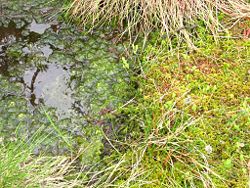 Bogs are not the only peat-forming wetland. For example, a fen is a freshwater, peat-forming wetland with chemically basic (which roughly means alkaline) ground water. This means that it contains a moderate or high proportion of hydroxyl ions (pH value greater than seven).

In bogs, moisture is provided essentially by precipitation, and for this reason bog waters are acidic and termed ombrotrophic (or cloud-fed), which accounts for their low plant nutrient status. Excess rainfall outflows, with dissolved tannins from the plant matter giving a distinctive tan color to bog waters.

In the United States, the four general categories of wetlands, according to the Environmental Protection Agency, are marshes, swamps, bogs, and fens. (EPA 2004) The term mires is sometimes used for a type of complex, wetland ecosystems that includes bogs and fens. Finlayson and Moser (1991) state that bogs are formed when rain and snow feed directly into an area with an already high watertable, with nutrients being leached from the soil and acid being produced as organic material slowly decomposes. They distinguish bogs from fens by stating that fens are fed by ground water or by interior drainage into a hollow rather than by precipitation; fens are higher in nutrients and lower in acidity than bogs, but can still produce peat.

The EPA notes that bogs often are formed in old glacial lakes and characterized by spongy peat deposits, evergreen trees and shrubs, and a floor covered by a thick carpet of sphagnum moss (EPA 2004).

Bogs are widely distributed in cold, temperate climates, mostly in the northern hemisphere (Boreal). The world's largest wetlands are the bogs of the Western Siberian Lowlands in Russia, which cover more than 600,000 square kilometers. Sphagnum bogs historically were widespread in northern Europe, and Ireland once was more than 15 percent bog. Achill Island off Ireland remains 87 percent bog.

There are extensive bogs in Canada and Alaska (labeled muskeg), Scotland, Denmark, Estonia (20 percent boglands), Finland (26 percent), northern Germany, the Netherlands, and Sweden. There are also bogs in the Falkland Islands.

Ombrotrophic wetlands (that is, bogs) are also found in the tropics, with notable areas documented in Kalimantan; these habitats are forested so would be better called swamps. Extensive bogs cover the northern areas of the U.S. states of Minnesota and Michigan, most notably on Isle Royale in Lake Superior. The pocosin of the southeastern United States is like a bog in that it is an acidic wetland but it has its own unusual combination of features. In certain areas such as Ireland and Scotland, coastal bogs are frequently intruded upon by low lying dunes called Machairs.

Bogs provide innumerable benefits. Nonetheless, many have been drained or otherwise converted to intensive agricultural, residential, or commercial use. It is estimated that more than 90 percent of the United Kingdom's lowland peat bogs have been damaged or destroyed (BBC 2004; RSPB 2007).

Bogs are recognized as a significant habitat type by a number of governmental and conservation agencies. For example, the United Kingdom in its Biodiversity Action Plan establishes bog habitats as a priority for conservation. Bogs are challenging environments for plant life because they are low in nutrients and very acidic. Furthermore, the absorption of water by sphagnum moss reduces the amount of water available for plants. As a result of these unique conditions, many unique flora and fauna may be found. Carnivorous plants have adapted to the low nutrient conditions by using insects as a nutrient source. Some bog plants, such as Leatherleaf, have waxy leaves to help retain moisture. English bogs are home to the boghopper beetle and a yellow fly called the hairy canary.

Many rare and protected plant and animal species are found on bogs. These include the Greenland white-fronted goose, which relies on bogs for feeding and roosting, and the bog moss Sphagnum imbricatum is entirely restricted to bogs (IPCC 1996).

Peat, which is characteristic of bogs, is a very early stage in the formation of coal deposits. Indeed, peat can be dried and burned and thus is used as an energy source, such as for home heating or even for power stations. More than 20 percent of home heat in Ireland comes from peat, and peat is also used for fuel in Finland, Scotland, Germany, and Russia. Russia is the leading producer of peat for fuel at more than 90 million metric tons per year.

The other major use of dried peat is as a soil amendment (sold as moss peat or sphagnum) to increase the soil's capacity to retain moisture and enrich the soil. It is also used as a mulch, although this generally is not advisable since it can repel water when dried. Some distilleries, notably Laphroaig, use peat fires to smoke the barley used in making scotch whiskey. This gives Scotch whiskey its distinctive smoky flavor, often called "peatiness" by its aficionados.

Blueberries, cranberries, cloudberries, huckleberries, wild strawberries, and lingonberries are harvested from the wild in bogs. Bog oak, wood that has been partially preserved by bogs, has been used in manufacture of furniture.

The anaerobic acidic bogs are known to preserve mammalian bodies extremely well for millennia, making them a valuable archaeological resource.

During prehistoric times, peat bogs had considerable ritual significance to Bronze Age and Iron Age peoples, who considered them to be home to (or at least associated with) nature gods or spirits. The bodies of the victims of ritual sacrifices have been found in a number of locations in England, Ireland, and especially northern Germany and Denmark, almost perfectly preserved by the tanning properties of the acidic water. Some bogs have preserved ancient oak logs useful in dendrochronology, and they have yielded extremely well-preserved bog bodies, with organs, skin, and hair intact, buried there thousands of years ago after apparent Germanic and Celtic human sacrifice. Excellent examples of such human specimens are Haraldskær Woman and Tollund Man in Denmark. Both of these specimens retained remarkably intact skin, internal organs, and skeletons.

The discovery of several victims of ritual sacrifice by strangulation during the Iron Age culture of Denmark has been recorded (Glob 1969). The corpses were thrown into peat bogs where they were discovered after 2000 years, perfectly preserved down to their facial expressions, although well-tanned by the acidic environment of the Danish bogs. The Germanic culture has similarities to the characteristics of the probably Celtic Lindow man found at Lindow Common and with the Frisian culture described in the story of St. Wulfram. In Ireland, at Ceide fields in County Mayo, a 5000 year old neolithic farming landscape complete with field walls and hut sites has been found preserved under a raised blanket bog.

Carbon store. Worldwide, peat contains an estimated 550 gigatons (one gigaton = one billion metric tons) of carbon, which is equivalent to 30 percent of all global soil carbon, 75 percent of all atmospheric carbon, and twice the carbon stock of the world's forest biomass (Joosten 2007).

Recreational. Sphagnum bogs are used for sport, but this can be damaging. All-terrain vehicles are especially damaging to bogs. Bog snorkeling is popular in England and Wales. Llanwrtyd Wells, which claims to be the smallest town in Wales, hosts the World Bog Snorkeling Championships. In this event, competitors with mask, snorkel, and scuba fins swim along a 60-meter trench cut through a peat bog.

Aesthetic. The value of bogs as an aesthetic resource is difficult to quantify, but for many people bogs' uniqueness and biodiversity helps to make them places of beauty.

Agriculture. The blanket bogs of the west of Ireland have been used year round for grazing cattle and sheep (IPCC). Blanket bog habitats cover about ten million hectares of the earth's surface with Ireland claiming about eight percent of the total (IPCC).

Retrieved from https://www.newworldencyclopedia.org/p/index.php?title=Bog&oldid=1095026
Categories:
Hidden category:
This page was last edited on 12 January 2023, at 00:02.
Content is available under Creative Commons Attribution/Share-Alike License; additional terms may apply. See Terms of Use for details.