Oak is the common name for any of the deciduous or evergreen trees and shrubs comprising the flowering plant genus Quercus of the beech family Fagaceae, characterized by a fruit that is a nut called an acorn, simple, spirally arranged leaves, and male flowers in the form of catkins. The term also is used for the durable wood. Oak also appears in the common name of some species in related genera, notably the quite similar acorn-producing Cyclobalanopsis and Lithocarpus, both in the Fagaceae family, as well as some species in unrelated taxa, such as the poison oaks, which are shrubs in the genus Toxicodendron of the Anacardiaceae family.

There are several hundred species in the Quercus genus, many of which are commercially important as the source of hardwood lumber. Oaks also provide many cultural, symbolic, aesthetic, and ecological values. The strength, hardness, elasticity, durability, and attractive grain of the wood leads to its use for furniture, flooring, buildings, caskets, tool handles, and even aging red wines and other alcoholic beverages, among many other uses. The oak tree itself has long been considered sacred by many civilizations (Schonbeck and Frey 2005) and it is a common symbol of virtue and endurance. Oaks are widely planted as ornamental trees for shade and aesthetic purposes, and ecologically, the acorns and leaves provide food for many animals.

Quercus is native to the northern hemisphere, and includes deciduous and evergreen species extending from cold latitudes to tropical Asia and the Americas, as well as Europe. The more southern species tend to be evergreen, keeping their leaves all year round, and the more northern are deciduous, losing their leaves in autumn. Many deciduous species turn bright gold or scarlet in the autumn (Schonbeck and Frey 2005).

Oaks have spirally arranged leaves, with a lobed margin in many species; some have serrated leaves or entire leaves with a smooth margin. Small flowers are produced in spring. The male flowers hang in catkins, and profuse amounts of pollen, while the female flowers are in spikes, both on the same tree (Schonbeck and Frey 2005). The female flowers are wind pollinated by the pollen.

The fruit is a nut called an acorn, borne in a cup-like structure known as a cupule. Each acorn contains one seed (rarely two or three) and takes 6-18 months to mature, depending on species.

Trees typically are long-lived, with the average life expectancy for most oaks between 200 and 400 years, with some known to be over 800 years old (Schonbeck and Frey 2005).

The "live oaks" (oaks with evergreen leaves) are not a distinct group, instead with their members scattered among the sections below.

The genus is divided into a number of sections: 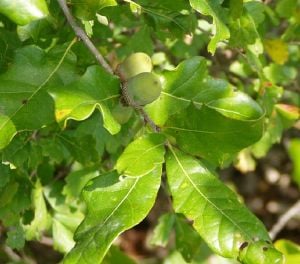 Hybrids are common in oaks but usually only between species within the same section; no verified inter-section hybrids are known, except between species of sections Quercus and Mesobalanus, where several occur.

The genus Cyclobalanopsis, here treated as a distinct genus following the Flora of China (eFloras), is often included within Quercus as a distinct subgenus.

Oak is prized wood for construction because of its strength, elasticity, durability, attractive grain, and resistance to pest species. As such, it is used for furniture, flooring, buildings, mine timbers, caskets, tool handles, railroad ties, barrels, and in the past, ships.

Oak wood has a density of about 0.75 g/cm³, great strength and hardness, and is very resistant to insect and fungal attack because of its high tannin content. It also has very attractive grain markings, particularly when quarter-sawn. Wide, quarter-sawn boards of oak have been prized since the Middle Ages for use in interior paneling of prestigious buildings such as the debating chamber of the British House of Commons in London, England, and in the construction of fine furniture. Oak wood, from Quercus robur and Q. petraea, was used in Europe for the construction of ships until the nineteenth century, and was the principal timber used in the construction of European timber-framed buildings. Today oakwood is still commonly used for furniture making and flooring, timber frame buildings, and for veneer production. Oak wood chips are used for smoking fish, meat, cheeses, and other foods. 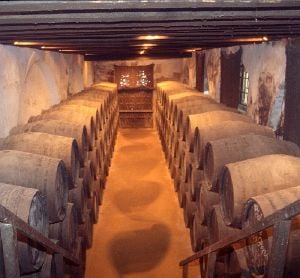 Barrels in which red wines, sherry, brandy, and spirits such as Scotch whisky and Bourbon whiskey are aged are made from European and American oak. The use of oak in wine can add many different dimensions to wine based on the type and style of the oak. Oak barrels, which may be charred before use, contribute to the color taste and aroma, of the contents, imparting a desirable oaky vanillin flavor to these drinks. The great dilemma for wine producers is to choose between French and American oakwoods. French oaks (Quercus robur, Q. petraea) give the wine greater refinement and are chosen for best wines, since they increase the price compared to those aged in American oak wood. American oak contributes greater texture and resistance to aging, but produces more violent wine bouquets. In addition to flavor, oak used for wine barrels increases the antioxidant activity of the wines (Schonbeck and Frey 2005.)

Did you know?
Oak used for wine barrels increases the antioxidant activity of the wines 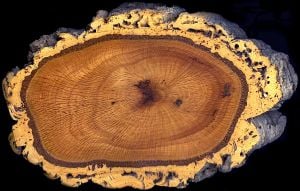 A section of the trunk of a cork oak, Quercus suber

The bark of Quercus suber, or cork oak, is used to produce wine stoppers (corks). This species grows in the Mediterranean Sea region, with Portugal, Spain, Algeria, and Morocco producing most of the world's supply.

The bark of the White Oak is dried and used in medical preparations. Oak bark is also rich in tannin, and is used by tanners for tanning leather. Acorns are used for making flour or roasted for acorn coffee. Oak galls were used for centuries as the main ingredient in manuscript ink, harvested at a specific time of year.

Ecologically, acorns are an important source of food for wildlife, and flour from ground acorns was eaten by Native Americans (Schonbeck and Frey 2005). The tannin has been used in leather production and some species are used for cork. Oak bark has been used medicinally to treat diarrhea and as an anti-inflammatory, whether as a gargle for sore throats or topically for skin inflammations such as dermatitis (Schonbeck and Frey 2005).

The leaves and acorns of the oak tree are poisonous to horses in large amounts, due to the toxin tannic acid, and causes kidney damage and gastroenteritis. Additionally, once horses have a taste for the leaves and acorns, they may seek them out. Therefore, horse owners are encouraged to fence out oak trees from their pasture, especially if forage is scarce. Symptoms of poisoning include lack of appetite, depression, constipation, diarrhea (which may contain blood), blood in urine, and colic.

Sudden oak death is a disease from a water mold (Phytophthora ramorum) that can kill oaks within just a few weeks. Oak wilt, caused by the fungus Ceratocystis fagacearum (a fungus closely related to Dutch elm disease), is also a lethal disease of some oaks, particularly the red oaks. (The white oaks can be infected but generally live longer.) Other dangers include wood-boring beetles, as well as root rot in older trees, which may not be apparent on the outside, often only being discovered when the trees come down in a strong gale. Oak apples are galls on oaks made by the gall wasp. The female kermes scale causes galls to grow on kermes oak. Oaks are used as food plants by the larvae of Lepidoptera species.

Also another pest would be the gypsy moth. The gypsy moth is dominant in North America and there are many concerns of the loss of economically critical and ecologically dominant oak species.

The oak has long been considered sacred by many civilizations (Schonbeck and Frey 2005). The Oak of Mamre, Abraham's Oak, is considered to be the location where Abraham pitched his tent, and legend states that anyone defacing this tree will lose his or her firstborn son (Schonbeck and Frey 2005). In the Bible, the oak tree at Shechem is the site where Jacob buries the foreign gods of his people (Gen. 35.4). In addition, Joshua erects a stone under an oak tree as the first covenant of the Lord (Josh. 24.25-7).

In Celtic mythology, the oak is the tree of doors, believed to be a gateway between worlds, or a place where portals could be erected. Thor's Oak was a sacred tree of the Germanic Chatti tribe. Its destruction marked the Christianization of the heathen tribes by the Franks. In Classical mythology the oak was a symbol of Zeus and his sacred tree. An example is the oracle of Dodona, which in prehistory consisted solely of a holy oak. The Druids considered the oak to have both mystical and medicinal significance (Schonbeck and Frey 2005). According to legend, King Arthur's round table was made from one huge slice of an ancient oak tree (Schonbeck and Frey 2005). 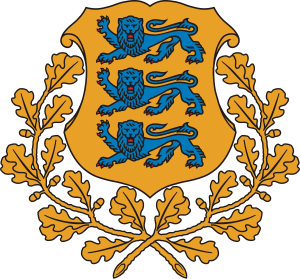 Oak leaves on the coat of arms of Estonia

The Oak tree is traditionally sacred to Serbs and is widely used throughout Serbia on national and regional symbols both old and new. The oak is a common symbol of strength and endurance.

There is a proverb, "Mighty oaks from little acorns grow." Another is: "Every majestic oak tree was once a nut who stood his ground."

Linnaeus described only five species of oak from eastern North America, based on general leaf form. These were White oak- Q. alba, Chestnut oak- Q. Montana, Red oak- Q. rubra, Willow oak- Q. phellos, and Water oak- Q. nigra. Because he was dealing with confusing leaf forms, the Q. prinus and Q. rubra specimens actually included mixed foliage of more than one species. For that reason, some taxonomists in the past proposed different names for these two species (Q. Montana and Q. borealis, respectively), but the original Linnaean names have now been lectotypified with only the specimens in Linnaeus' herbarium that refer to the species the names are applied to now.