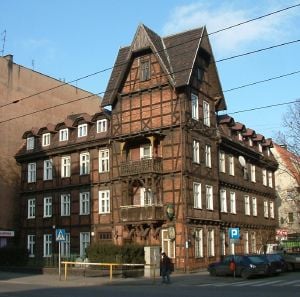 Timber framing (German: Fachwerk), or half-timbering, is the method of creating framed structures of heavy timber jointed together with pegged mortise and tenon joints. (Lengthening scarf joints and lap joints are also used.) Diagonal bracing is used to prevent racking of the structure. The use of timber framing in buildings provides both aesthetic and structural benefits, as the timber frame lends itself to open plan designs and allows for complete enclosure in effective insulation for energy efficiency. However, this method inherits any disadvantages wood may exhibit as an engineering material. 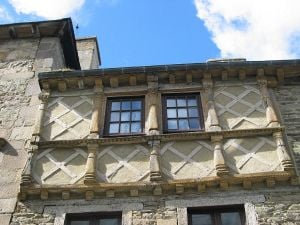 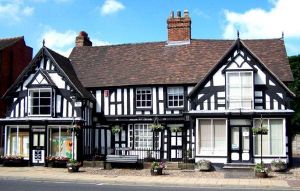 One of the first people to use the term half-timbered was Mary Martha Sherwood (1775-1851) who employed it in her book The Lady of the Manor, published in several volumes from 1823-1829. She uses the term picturesquely: "Passing through a gate in a quickset hedge, we arrived at the porch of an old half-timbered cottage, where an aged man and woman received us."

It is not a term she uses generally for all timber-framed buildings, for elsewhere she writes: "An old cottage, half hid by the pool-dam, built with timber, painted black, and with white stucco, and altogether presenting a ruinous and forlorn appearance." 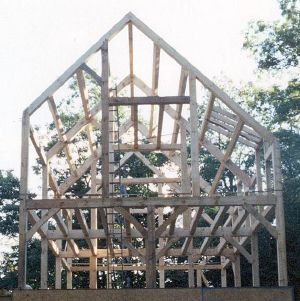 The completed frame of a modern timber frame home 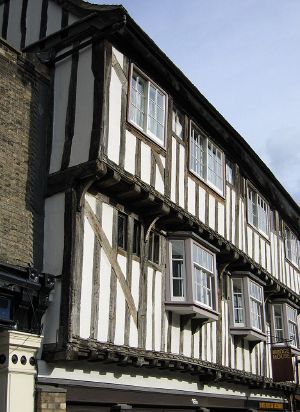 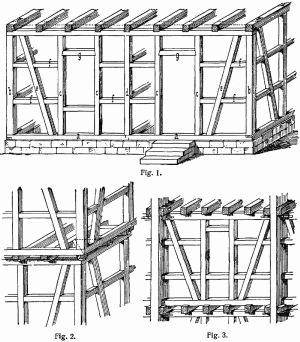 Illustration of timber framing from the Lexikon der gesamten Technik (1904).

To deal with the variable sizes and shapes of hewn and sawn timbers the two main historical layout methods used were: Scribe carpentry and square rule carpentry. Scribing was used throughout Europe, especially from the twelfth century to the nineteenth century, and was brought to North America where it was common into the early 19th century. In a scribe frame every timber will only fit in one place so that every timber has to be numbered. Square rule carpentry developed in New England in the eighteenth century and features housed joints in main timbers to allow for interchangeable braces and girts. Today regularized timber can mean that timber framing is treated as joinery especially when cut by large CNC (computer numerical control) machines.

To finish the walls, the spaces between the timbers were often infilled with wattle-and-daub, brick or rubble, with plastered faces on the exterior and interior which were often “ceiled” with wainscoting for insulation and warmth. This method of infilling the spaces created the half-timbered style, with the timbers of the frame being visible both inside and outside the building.

Where the house owner could afford it, the more expensive technique of jettying was incorporated in the construction of the house. Home owners were taxed on their ground-floor square footage; jettying allows higher stories to have larger square footage than the ground floor.

A jetty is an upper floor that depends on a cantilever system in which a horizontal beam, the jetty bressummer, on which the wall above rests, projects outward beyond the floor below.

Historically the timbers would have been hewn square using a felling axe and finish surfaced with a broad axe. If required, smaller timbers were ripsawn from the hewn baulks using pitsaws or frame saws. Today it is more common for timbers to be bandsawn and the timbers may sometimes be machine planed on all four sides.

The vertical timbers include

The horizontal timbers include

When jettying, horizontal elements can include:

The sloping timbers include

It is in the United States and Canada, however, that the art of timber frame construction has been revived since the 1970s, and is now experiencing a thriving renaissance of the ancient skills. This is largely due to such practitioners as Steve Chappell, Jack Sobon and Tedd Benson who studied old plans and techniques and revived the technique that had been long neglected.

Timber framed structures differ from conventional wood framed buildings in several ways. Timber framing uses fewer, larger wooden members, commonly using timbers with dimensions in the range of 15 to 30 cm (6" to 12") as opposed to common wood framing which uses many more timbers with their dimensions usually in the 5 to 25 cm (2" to 10") range. The methods of fastening the frame members also differ, in conventional framing the members are joined using nails or other mechanical fasteners while timber framing uses mortise and tenon or more complex joints which are usually fastened using only wooden pegs. Modern complex structures and timber trusses often incorporate steel joinery such as gusset plates. The steel is used for both structural and architectural purposes.

Recently, it has become common to surround the timber structure entirely in manufactured panels, such as SIPs (Structural Insulating Panels). This method of enclosure means that the timbers can only be seen from inside the building, but has the benefits of being less complex to build and offering more efficient heat insulation. Structural Insulated Panels are a sandwich construction of two rigid composite materials usually wood based like OSB or plywood with a foamed insulating material in between either by gluing billets as in EPS (Expanded Polystyrene) or foamed and formed in place with polyurethane. The advantage of this for timber framing in the modern world is less of a dependency on bracing and auxiliary members like minor joists and rafters as the panels can span a considerable distance and greatly increase the stiffness of the timber frame itself.

Alternative ways include the use of straw bale construction. The straw bales are stacked for the walls with various finishes applied to the interior and exterior such as stucco and plaster. This appeals to the traditionalist and the environmentalist as this is using "found" materials to build. 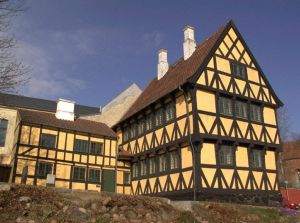 The techniques used in timber framing date back thousands of years, and have been used in many parts of the world during various periods such as ancient Japan, Europe, and medieval England.

Half-timbered construction in the Northern European vernacular building style is characteristic of medieval and early modern Denmark, England, Germany and parts of France, in localities where timber was in good supply and building stone and the skills to work it were in short supply. In half-timbered construction timbers that were riven in half provided the complete skeletal framing of the building.

Some Roman carpentry preserved in anoxic layers of clay at Romano-British villa sites demonstrate that sophisticated Roman carpentry had all the necessary techniques for this construction. The earliest surviving (French) half-timbered buildings date from the 12th century.

Some of the earliest known timber houses in Europe have been found in Scotland and England, dating to Neolithic times; Balbridie and Fengate are some of the rare examples of these constructions.

In the Weald of Kent and Sussex, the half-timbered structure of the Wealden house consisted of an open hall with bays on either side and often jettied upper floors.

Half-timbered construction went with British colonists to North America in the early seventeenth century but was soon left behind in New England and the mid-Atlantic colonies for clapboard facings (another tradition of East Anglia).

Many German cities are famed for their half-timbered houses. Timber framing was the most popular building technique from the twelfth to the nineteenth century. The oldest buildings still standing are from the thirteenth century. From the fifteenth century on, timbers were sometimes elaborately carved and infills with smaller timbering where made for both decorative and structural reasons.

The German Framework Road (Deutsche Fachwerkstraße) is a traveling route that links cities with picturesque half-timbered buildings. It is more than 2000 km long and stretches across the states of Lower Saxony, Saxony-Anhalt, Hesse, Thuringia, Bavaria and Baden-Württemberg.

Called colombage pierroté in Quebec as well other areas of Canada, half-timbered construction in-filled with stone and rubble survived into the nineteenth century and was consciously revived at the end of that century. In Western Canada it was used on buildings in the Red River Settlement. The Men's House at Lower Fort Garry is a good example of colombage pierroté. 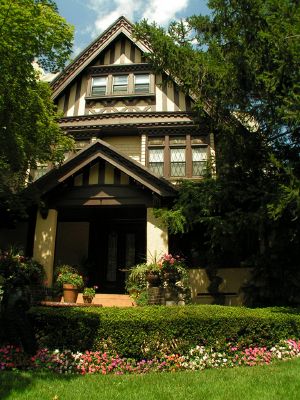 When half-timbering regained popularity in Britain after 1860 in the various revival styles, such as the Queen Anne style houses by Richard Norman Shaw and others, it was often used to evoke a "Tudor" atmosphere (see Tudorbethan), though in Tudor times half-timbering had begun to look rustic and was increasingly limited to villages houses (illustration, above left). In 1912, Allen W. Jackson published The Half-Timber House: Its Origin, Design, Modern Plan, and Construction, and rambling half-timbered beach houses appeared on dune-front properties in Rhode Island or under palm-lined drives of Beverly Hills. During the 1920s increasingly minimal gestures towards some half-timbering in commercial speculative house-building saw the fashion diminish.

In the revival styles, such as Tudorbethan (Mock Tudor), the half-timbered appearance is superimposed on the brickwork or other material as an outside decorative façade rather than forming the main frame that supports the structure.

The use of timber framing in buildings offers various aesthetic and structural benefits, as the timber frame lends itself to open plan designs and allows for complete enclosure in effective insulation for energy efficiency.

The timber frame structure goes up quickly in its modern incarnation. While some modern shops still cut the timbers with hand tools and hand guided power tools, modern CNC (computer numerical control) machinery has been readily adapted to the task. This eliminates much of the repetitive labor from the process, but still often requires hand-finishing. The complexity of hip/valley joinery as of yet cannot be economically duplicated by CNC machinery beyond simple cuts. Additionally, due to the rigid timber requirements of CNC machinery, odd sized, tree trunk, hand hewn, and recycled timbers are usually hand cut even in the machine dominated shops.

One aid in speeding up assembly on site is pre-fitting the frame, usually in bent or wall sections that are laid out on the shop floor. This can assure a correct fit and with pre-drilling for the pegs it speeds the site process. This pre-fitting in the shop is independent of a machine or hand cut system. Valley and Hip timbers usually are not pre-fit but careful layout and checking can catch most errors.

In two to three days an average size timber frame home can be erected and within a week to two weeks after that the shell of the house is ready for drying in, which is to say, ready for windows, mechanical systems, and roofing. The shell in this case would be with Structural Insulated Panels (SIPs).

The timber frame can give the home owner the ability to make a creative statement through the use of design and specialty touches like carvings of favorite quotes and incorporating timbers from heirloom structures, like a barn from a family homestead.

Because the structure is made from wood, it inherits any disadvantages wood may exhibit as an engineering material. Some possible disadvantages of wood as opposed to some other building materials include:

Retrieved from https://www.newworldencyclopedia.org/p/index.php?title=Timber_framing&oldid=1085466
Categories:
Hidden category:
This page was last edited on 4 November 2022, at 03:18.
Content is available under Creative Commons Attribution/Share-Alike License; additional terms may apply. See Terms of Use for details.