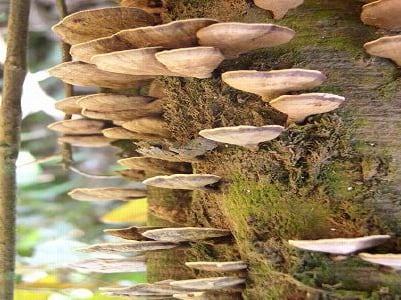 Fungus growing on a tree in Borneo

Fungi (singular fungus) make up one of the kingdoms into which living things are divided by biologists. A fungus is a eukaryotic organism that digests its food externally and absorbs the nutrient molecules into its cells.

Fungi differ from bacteria in having a cell nucleus; from plants in not making their own food through photosynthesis; and from animals in not being mobile and in absorbing nutrition externally rather than internally. Fungi include mushrooms, yeasts, molds, mildews, and others.

Although often unnoticed or misunderstood by humans, fungi play a vital role in the earth's ecosystems and are used extensively by humans. Fungi are the primary decomposers of dead plant and animal matter in many ecosystems, and are commonly seen on old bread as mold. Yeasts are responsible for fermentation of beer and bread, and mushroom farming is a large industry in many countries.

Fungi's mutualistic symbiotic relationship with other organisms and most land plants is reflective of an underlying harmony in biological interactions and the universal principle of bi-level functionality.

Fungi may be single-celled or multicellular.

Multicellular fungi are composed of networks of long hollow tubes called hyphae. The hyphae often aggregate in a dense network known as mycelium. The mycelium grows through the medium on which the fungus feeds. Because fungi are embedded in the medium in which they grow, most often soil, they are often not visible.

Although fungi lack true organs, the mycelia may become organized into more complex reproductive structures called fruiting bodies, or sporocarps, when conditions are right. "Mushroom" is the common name given to the above-ground fruiting bodies of many fungal species. Although these above-ground structures are the most conspicuous to humans, they make up only a small portion of the entire fungal body.

Some fungi form rhizoids, which are underground, root-like structures that provide support and transport nutrients from the soil to the rest of the mycelium.

The largest organism in the world is said to be a single Armillaria ostoyae individual growing in a forest in eastern Oregon. The underground mycelial network may cover as much as 2,200 acres. 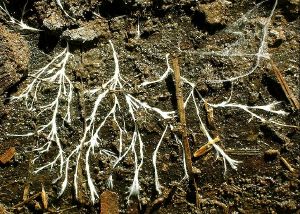 The major divisions (phyla) of fungi are mainly classified based on their sexual reproductive structures. Currently, five main divisions are recognized:

The Deuteromycota is a sort of miscellaneous junk category for forms of fungi of uncertain affinity, and include those fungi in which sexual reproduction is unknown. They are also referred to in informal Latin as the Fungi imperfecti, and more recently as mitosporic fungi, and the "imperfect fungi." This division is not treated formally in more recent systems, although it is still used widely by plant pathologists for the purposes of quick diagnosis and when the teleomorph stage of the particular organism is unknown. Because sexual reproduction is the basis for classification of fungi, it is often difficult to place these fungi in their appropriate group (because they lack sexual reproduction). 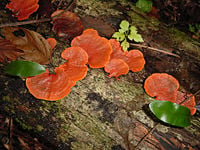 Fungi may reproduce sexually or asexually. In asexual reproduction, the offspring are genetically identical to the “parent” organism (they are clones). During sexual reproduction, a mixing of genetic material occurs so that the offspring exhibit traits of both parents. Many species can use both strategies at different times, while others are apparently strictly sexual or strictly asexual. Sexual reproduction has not been observed in some fungi of the Glomeromycota and Ascomycota. These are commonly referred to as Fungi imperfecti or Deuteromycota.

Yeasts and other unicellular fungi can reproduce simply by budding, or “pinching off” a new cell. Many multicellular species produce a variety of different asexual spores that are easily dispersed and resistant to harsh environmental conditions. When the conditions are right, these spores will germinate and colonize new habitats.

Most fungi live by decomposing the remains of dead plants and animals. This releases carbon and other materials back to the environment where they can be reused by plants. Some fungi are predators of nematodes, which they capture using an array of devices such as constricting rings or adhesive nets. Other fungi form symbiotic relationships with other plants and animals, whether this close association is beneficial or harmful to the other organisms. In some cases, the fungi are parasites, living in or on the bodies of plants and animals and sometimes causing diseases.

Other fungi may live in mutually beneficial symbiotic relationships (mutualism) with other organisms. Lichens are a combination of an algae, which provides food through photosynthesis, and a fungus, which provides protection to the algae. Leaf-cutter ants and some species of termites live in a symbiotic relationship with fungi in which the insects protect the fungi and provide them with plant material to decompose, while the fungi provide food for the insects.

The most important symbiotic relationship in which fungi take part was unknown until the last part of the twentieth century. That is mycorrhizas, the relationship between fungi and plants. Specialized fungi live on the roots of most land plants (perhaps 95 percent). The hyphae of the fungi extend out into the soil and form a network of fibers that in effect extend the root system of the plant enabling it to more effectively absorb water and minerals. The plant provides the fungi with nutrients produced by its photosynthesis. Most plants could not thrive without a partnership with these fungi.

Besides their tremendous indirect importance to humans as a result of their role in the life cycles of plants, fungi also affect people directly in many ways. 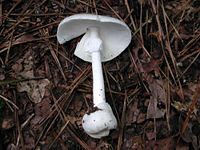 Mushrooms are the above ground fruiting bodies of various species of fungus that mostly live on decaying plant material in soil. From prehistoric times, people have consumed them. They are flavorful and provide B vitamins and such minerals as potassium, phosphorus, and iron; but not many calories. Many species of mushrooms contain toxins that can cause sickness or even death. Among the most deadly are the destroying angel and the deathcap, members of the genus Amanita, which have killed many mushroom hunters. 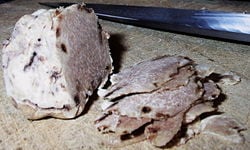 Truffles are the underground fruiting bodies of several species of fungi that live in a mycorrhizal relationship with the roots of oak trees. They are highly prized for their strong flavor. Traditionally, they have been dug up in the woods by using pigs or dogs that find them by their scent. In the nineteenth century in France, it was discovered that by planting the acorns from an affected tree, new "truffle fields" could be created. France is still the main truffle producing nation, but there is a great potential for truffle cultivation's worldwide expansion.

Yeasts are single-cell fungi. They break down the carbohydrates in grain and fruit, producing alcohol and carbon dioxide through the process of fermentation. Beginning about 10,000 years ago, they have been used to produce beer, wine, and other alcoholic beverages and also to leaven bread. In recent times, yeast has gained popularity as a nutritional supplement. It has a nutty, cheesy flavor and is sometimes used as a substitute for cheese on pasta and popcorn.

Penicillin was discovered in 1928 by Alexander Fleming when he found a blue-green mold growing in a bacteria culture plate. The mold was releasing a substance that was inhibiting the growth of the bacteria. This was penicillin, part of the mold's natural defense against bacteria. It is estimated that penicillin has saved at least 200 million lives since its first use as a medicine in 1942.

Some diseases are caused by parasitic fungi. Athlete's foot and other skin diseases are the most common. Most fungal diseases are not too serious, but some—such as fungal pneumonia—can be deadly.

Many fungal diseases of humans also occur in animals, particularly mammals. Ringworm is the most common fungal disease that affects animals, and humans can contract ringworm from animals; cats and dogs are often carriers. Contrary to its name, ringworm is not caused by a worm, but by a fungus, and it is quite common, especially among children. Ringworm may be spread by skin-to-skin contact, as well as via contact with contaminated items such as hairbrushes.

Fungi also cause diseases in plants, including smuts, rusts, and mildews. These plant diseases are serious problems in agriculture. Dutch elm disease, caused by fungus species of the genus ‘‘Ophiostomi’’, which are native to Asia (not Holland), has killed almost all of the native elm trees of Northern Europe and North America since it was introduced accidentally in the twentieth century. 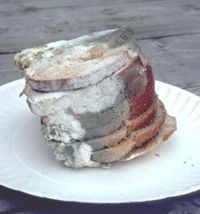 Molds are various types of fungi that decompose dead plant and animal material. They are a big cause of the spoilage of foods, and can often be seen growing on food left too long in a refrigerator. They also can damage clothing and wood and other building materials. Molds, like all fungi, need moisture to grow, so the best way to prevent damage from them is too avoid dampness.

Much research is going on worldwide into fungi and their possible benefits to humankind. Some species have been used as biological controls for pests, taking advantage of the fungi's own natural defenses against bacteria, insects, worms, and other fungi. There is even an attempt to use yeast in fuel cells to produce electricity.