Potassium (chemical symbol K, atomic number 19) is a member of a group of chemical elements known as alkali metals. It is a soft metal and is silvery white when freshly cut, but it tarnishes rapidly on exposure to air. Less dense than water, it is the second least dense metal after lithium. It reacts violently with water to produce the alkali potassium hydroxide and hydrogen gas. In nature, it is bound to other elements in the form of compounds, or it occurs as cations in solution.

The ions, alloys, and compounds of potassium have a wide range of applications. Potassium ions are essential nutrients for living organisms and are found in seawater and most soil types. The hydroxide of potassium is an important industrial chemical, and the chloride, sulfate, and carbonate are used in fertilizers. Potassium nitrate is used in gunpowder, the carbonate is valuable for the manufacture of glass, and the superoxide is a source of oxygen in portable respiratory systems.

Potassium was discovered in 1807 by Sir Humphry Davy, who derived it from caustic potash (potassium hydroxide, KOH). It was the first metal isolated by electrolysis.

Potassium was not known to the ancient Romans, and its names are neo-Latin, not Classical Latin. The Latin name kalium (from which potassium gets its symbol, K) was taken from the word "alkali," which came from Arabic al qalīy, meaning "the calcined ashes." The name potassium was made from the English word "potash," which originally meant an alkali extracted in water in a pot of ash of burnt wood or tree leaves.

Potassium makes up about 2.4 percent of the weight of the Earth's crust and is the seventh most abundant element in it. As it is very electropositive, potassium is never found as the free element in nature. Rather, it forms compounds from which it is difficult to separate.

Potassium minerals such as carnallite, langbeinite, polyhalite, and sylvite form extensive deposits in the beds of ancient lakes and seas. The principal source of potassium, potash (impure form of potassium carbonate), is mined in California, New Mexico, Utah, Germany, and in other places around the world. Large deposits of potash have been found about 3,000 feet below the surface of Saskatchewan, and several large mines have been in operation since the 1960s. Saskatchewan pioneered the method of freezing wet sands (the Blairmore formation) as a way to drive mine shafts through them. The oceans are another source of potassium, but the quantity present in a given volume of seawater is relatively low, compared to the concentration of sodium.

Potassium can be isolated through the electrolysis of its hydroxide, by a process that has changed little since the time of Davy. Thermal methods are also employed to obtain potassium from potassium chloride.

As an alkali metal, potassium is part of group 1 of the periodic table, between sodium and rubidium, and it lies in period 4, just before calcium. It is a soft, low-melting solid that can be easily cut with a knife. With a density less than that of water, potassium is the second least dense metal after lithium.

Like other alkali metals, potassium has a single electron in its outermost shell, and it can readily lose this electron to become a positive ion. For this reason, although freshly cut potassium is silvery in appearance, it oxidizes and tarnishes rapidly when exposed to the air. In addition, it reacts violently with water, even more so than lithium or sodium, producing hydrogen gas and the alkali potassium hydroxide in solution. The reaction produces so much heat that the evolved hydrogen gas ignites. To prevent this from happening, samples of potassium are stored in an inert medium such as kerosene.

Potassium and its compounds emit a violet color in a flame. This fact is the basis of the flame test for the presence of potassium in a sample. 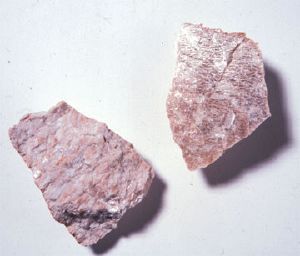 Potassium in a feldspar mineral.

The decay of 40K to 40Ar is the basis for a commonly used method for dating rocks. The conventional potassium-argon dating method depends on the assumption that the rocks contained no argon at the time of formation and that all the subsequent 40Ar was quantitatively retained. Minerals are dated by measurement of the concentration of potassium and the amount of radiogenic (radioactively produced) 40Ar that has accumulated. Minerals that are best suited for dating include biotite, muscovite, plutonic/high grade metamorphic hornblende, and volcanic feldspar. Whole rock samples from volcanic flows and shallow instrusives can also be dated if they are unaltered.

Besides their use for dating, potassium isotopes have been used extensively as radioactive tracers in studies of weathering. They have also been used for nutrient cycling studies because potassium is a macronutrient required for living organisms.

Given that radioactive 40K occurs in nature, it becomes part of some commercially available salt substitutes in sufficient quantity for large bags of those substitutes to be used as a radioactive source for classroom demonstrations. In healthy animals and people, 40K represents the largest source of radioactivity, greater even then 14C (carbon-14). In a person who weighs 70 kilograms (kg), about 4,000 nuclei of 40K decay per second. [1]

Given that solid potassium reacts violently with water, it should be stored under a mineral oil such as kerosene and handled with care. Unlike lithium and sodium, however, potassium cannot be stored under oil indefinitely. If stored longer than six months to a year, dangerous, shock-sensitive peroxides can form on the metal and under the container's lid, and they can detonate upon opening the container. For this reason, potassium (as well as rubidium and cesium) should NOT be stored for longer than a year, unless kept in an inert (argon) atmosphere or vacuum. 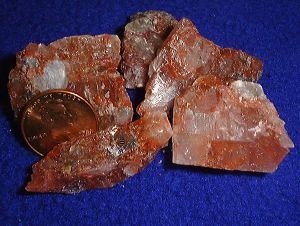 The mineral potash is composed mainly of potassium carbonate, with minor amounts of other potassium salts.

Potassium carbonate (K2CO3) is a deliquescent (usually damp or wet) white salt that readily dissolves in water to form a strongly alkaline solution. First identified in 1742 by Antonio Campanella, it is the primary component of potash and the more refined "pearlash" or "salts of tartar." Pearlash has been used to produce soap, glass, and china.

Potassium chloride (KCl) occurs naturally as the mineral sylvite and in combination with sodium chloride as sylvinite. When purified, it forms white or colorless crystals. Highly soluble in water, it is a source of potassium and chloride ions.

Although potassium is more electropositive than sodium, KCl can be reduced to the metal by reaction with metallic sodium, if the potassium is removed by distillation. This is the main method for producing metallic potassium.

The majority of the potassium chloride produced is used for making fertilizer, because the growth of many plants is limited by their potassium intake. As a chemical feedstock, it is used for the manufacture of potassium hydroxide and potassium metal. It is also used in medicine, scientific applications, food processing, as a sodium-free substitute for table salt (sodium chloride), and in judicial execution through lethal injection.

Potassium is vital to the human body, and oral potassium chloride is the common means to replenish it, although it can also be diluted and given intravenously. Medically, it is used in the treatment of hypokalemia and associated conditions, for digitalis poisoning, and as an electrolyte replenisher. Side effects can include gastrointestinal discomfort, nausea and vomiting, diarrhea, and bleeding of the gut. Overdoses cause hyperkalemia, which can lead to cardiac conduction blocks, fibrillation, and cardiac arrhythmias.

The compound potassium hydroxide (KOH), sometimes known as caustic potash or potash lye, is a metallic base. Readily soluble in water, it is very alkaline. For this reason, it is used in agriculture to correct the pH of acidic soils. It can also be used as a fungicide or herbicide.

Potassium hydroxide is a major industrial chemical, used as a base in a wide variety of chemical processes. For instance, it is used for acrylate ester copolymer coatings, defoaming agents in the manufacture of paper, formulation aid for food, pH control agent, polyethylene resins, textile processing, and as a catalyst in reactions like the production of biodiesel.

A very significant use of KOH in the average person's life is that alkaline batteries use an aqueous solution of KOH as an electrolyte. Thus, potassium hydroxide helps power flashlights, smoke detectors, and other battery-powered household items.

Compounds with the name "potash"

The mineral named "potash" is composed mainly of potassium carbonate (K2CO3), with minor amounts of other potassium salts. A number of chemical compounds containing potassium use the word potash in their traditional names:

Potassium, especially in the form of its ions, compounds, and alloys, has a wide range of applications. Some of them are listed below.

Potassium in the diet

Potassium (in the form of ions in solution) is an essential mineral in human nutrition. It is considered a "macronutrient" or "macromineral" for our diet—that is, a mineral we need at levels higher than 100 milligrams (mg) per day. The 2004 guidelines of the Institute of Medicine specify a Recommended Dietary Allowance (RDA) of 4,700 mg potassium daily. It is thought that most Americans consume only half that amount per day [2]Insufficient potassium intake is likewise widespread in the European Union, particularly Germany and Italy [3]

In the human body, potassium assists in muscle contraction and in maintaining fluid and electrolyte balance in body cells. It is also important in sending nerve impulses, as well as releasing energy from protein, fat, and carbohydrates during metabolism.

Eating a variety of foods that contain potassium is the best way to get an adequate amount. Healthy individuals who eat a balanced diet rarely need supplements. Foods with high content of potassium include orange juice, avocados, celery, parsnips, and turnips, but it is also found in many other fruits, vegetables, and meats. Research has indicated that diets high in potassium can reduce the risk of hypertension. On the other hand, some people with kidney disease are advised to avoid large quantities of dietary potassium.