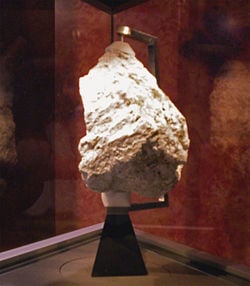 Feldspar is the name of a group of rock-forming minerals that make up as much as 60 percent of the Earth's crust. Feldspars crystallize from magma in both intrusive and extrusive rocks, and they can also occur as compact minerals, as veins, and are also present in many types of metamorphic rock. Rock formed entirely of plagioclase feldspar (see below) is known as anorthosite. Feldspars are also found in many types of sedimentary rock.

Feldspar is derived from the German Feld (field) and Spat (a rock that does not contain ore). "Feldspathic" refers to materials that contain feldspar. The alternative spelling, felspar, has now largely fallen out of use.

This group of minerals consists of framework or tectosilicates. The compositions of common feldspars can be expressed in terms of three endmembers:

Sanidine (monoclinic), orthoclase, and microcline (triclinic) refer to polymorphs of K-feldspar. Sanidine is stable at the highest temperatures, and microcline at the lowest. Perthite is a typical texture in alkali feldspar, due to exsolution[1] of contrasting alkali feldspar compositions during cooling of an intermediate composition. The perthitic textures in the alkali feldspars of many granites are coarse enough to be visible to the naked eye.

Compositions of the plagioclase series have been labeled as follows (percent anorthite in parentheses):

Intermediate compositions of plagioclase feldspar also may produce two feldspars of contrasting composition during cooling. Diffusion, however, is much slower than in alkali feldspar, and the resulting two-feldspar intergrowths typically are too fine-grained to be visible with optical microscopes. The immiscibility gaps in the plagioclase solid solution are complex, compared to the gap in the alkali feldspars. The play of colors visible in some feldspar of labradorite composition is due to very fine-grained exsolution lamellae.