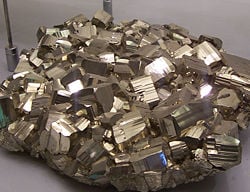 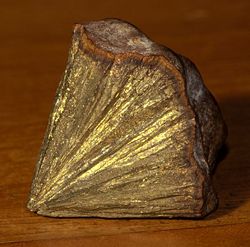 In materials science, the term polymorphism refers to the ability of a solid material to exist in more than one form or crystal structure. Polymorphism can potentially be found in any crystalline material including polymers and metals. It is related to allotropy, which refers to elemental solids. Together with polymorphism, the complete morphology of a material is described by other variables such as crystal habit, amorphous fraction, or crystallographic defects. Polymorphism is relevant to the fields of pharmaceuticals, agrochemicals, pigments, dyestuffs, foods, and explosives.

When polymorphism exists as a result of difference in crystal packing, it is called packing polymorphism. Polymorphism can also result from the existence of different conformers of the same molecule in conformational polymorphism. In pseudopolymorphism the different crystal types are the result of hydration or solvation. An example of an organic polymorph is glycine, which is able to form monoclinic and hexagonal crystals.

An analogous phenomenon has been observed with amorphous materials, when a substance can take on several different amorphous modifications.

In terms of thermodynamics, there are two types of polymorphism. For a monotropic system, a plot of the free energy of the various polymorphs against temperature do not cross before all polymorphs melt—in other words, any transition from one polymorph to another will be irreversible. For an enantiotropic system, a plot of the free energy against temperature shows a crossing point before the various melting points, and it may be possible to convert reversibly between the two polymorphs on heating and cooling.

Despite the potential implications polymorphism is not always well understood. In 2006, a new crystalline form of maleic acid was discovered, 124 years after the first crystal structure determination.[1] Maleic acid is a chemical manufactured on a very large scale in the chemical industry and is a salt forming component in medicine. The new crystal type is produced when a caffeine maleic acid co-crystal (2:1) is dissolved in chloroform and when the solvent is allowed to evaporate slowly. Whereas form I has monoclinic space group P21/c, the new form has space group Pc. Both polymorphs consist of sheets of molecules connected through hydrogen bonding of the carboxylic acid groups but in form I the sheets alternate with respect of the net dipole moment whereas in form II the sheets are oriented in the same direction.

1,3,5-Trinitrobenzene is more than 125 years old and was used as an explosive before the arrival of the safer 2,4,6-trinitrotoluene. Only one crystal form of 1,3,5-trinitrobenzene has been known in the space group Pbca. In 2004, a second polymorph was obtained in the space group Pca2(1) when the compound was crystallized in the presence of an additive, trisindane. This experiment shows that additives can induce the appearance of polymorphic forms.[2]

Polymorphism is important in the development of pharmaceutical ingredients. Many drugs are receiving regulatory approval for only a single crystal form or polymorph. In a classic patent case the pharmaceutical company GlaxoSmithKline defended its patent for the polymorph type II of the active ingredient in Zantac against competitors while that of the polymorph type I had already expired. Polymorphism in drugs can also have direct medical implications. Medicine is often administered orally as a crystalline solid and dissolution rates depend on the exact crystal form of a polymorph.

Cefdinir is a drug appearing in 11 patents from five pharmaceutical companies in which a total of five different polymorphs are described. The original inventor Fuijsawa now Astellas (with US partner Abbott) extended the original patent covering a suspension with a new anhydrous formulation. Competitors in turn patented hydrates of the drug with varying water content which were importantly only described with basic techniques such as infrared spectroscopy and XRPD, a practise critisized by in one review[3] because these techniques at the most suggest a different crystal structure but are unable to specify one. These techniques also tend to overlook chemical impurities or even co-components. Abbott researchers realized this the hard way when in one patent application it was ignored that their new cefdinir crystal form was in fact that of a pyridinium salt. The review also questioned whether the polymorphs offered any advantages to the existing drug something clearly demanded in a new patent.

Acetylsalicylic acid elusive second polymorph was first discovered by Vishweshwar et. al.[4], and fine structural details were given by Bond et. al.[5] A new crystal type was found after attempted co-crystallization of aspirin and levetiracetam from hot acetonitrile. The form II is only stable at 100 K and reverts back to form I at ambient temperature. In the (unambiguous) form I two salicylic molecules form centrosymmetric dimers through the acetyl groups with the (acidic) methyl proton to carbonyl hydrogen bonds and in the newly claimed form II each salicylic molecule forms the same hydrogen bonds but then with two neighboring molecules instead of one. With respect to the hydrogen bonds formed by the carboxylic acid groups both polymorphs form identical dimer structures.

Crystal Polymorphs can disappear. There have been cases of individual laboratories growing one crystal form. They then grow a different crystal form, and are unable to make the first form again. Alternatively, they find that they can make the first form again but it now converts to the second form over time. The drug Paroxetine was subject to a law suit that hinged on such a pair of polymorphs (A link to a discussion of cases in Canada and the US has been given below). An example is known when a so-called "disappeared" polymorph reappeared after 40 years. These so-called "disappearing" polymorphs are probably metastable kinetic forms.