In biology, polymorphism (from Greek: poly, meaning "many" and morph, meaning "form") is a discontinuous genetic variation where two or more forms, stages, or types exist in the same species within the same population. It can apply to biochemical, morphological, and behavioral characteristics, but must be discontinuous. Thus, different human blood types (A, B, AB, or O) and sexual dimorphism (male or female) are both examples of polymorphism, but height differences are not, since they are not discontinuous but continuous variations.

The discontinuous division of labor in an ant or bee colony—such as the queen, reproductive males, workers, soldiers—is also a type of polymorphism. This social organization harmoniously integrates the discrete members as if they were different organs of a single biological organism. Just as each organ contributes to the whole, while also pursuing its own individual needs, each member of the caste provides benefit to the whole, as if the colony were one functioning unit.

The different forms observed in a polymorphic population are called morphs and are the phenotypic expression of an organism's genotype. One of the characteristic features of any natural population is its genetic diversity. Discontinuous genetic variation results in the occurrence of several different forms or types of individuals in a species. Essentially, the gene produces one or another variety without intermediaries.

Polymorphism is a universal phenomenon and is found in every species. It is the basis for the operation of both natural as well as artificial selection, as out of the different morphs, one or another may be allowed to reproduce with higher degrees of success in the given environmental condition. Note, however, that the prevalence of a particular phenotypic trait in the population may not reflect its own value; rather, the gene may have numerous effects, such that the gene itself is important to the organism beyond the specific phenotypic effect.

This occurs when different forms coexist within a given population in equilibrium, that is, at a constant proportion from generation to generation. From the point of view of evolutionary biology, a polymorphism that persists over many generations is usually maintained because no one form has an overall advantage or disadvantage over the others in terms of natural selection; in other words, all the forms possess, for one reason or another, survival value for the species. There are various types of balanced or stable polymorphism.

In higher invertebrates, as well as in vertebrates, the male and female sex organs are carried by separate individual, i.e., whether male or female, only one sex occurs in an individual. This is the most obvious example of polymorphism. Further, many animals exhibit well marked sexual dimorphism (male and female individuals having different morphological forms). The male and female populations in animals and plants constitute balanced polymorphism, as their proportion remains constant from generation to generation, unless there is an artificial preference for a particular sex.

When the alleles (genes occurring at the same locus of two homologous chromosomes) have different phenotypic expression, then polymorphism results based on the number of allelic genes and their proportion in the gene pool. In many cases of polymorphism, the different morphs are distinct.

A classic textbook example of this type of polymorphism is the existence of melanic and non-melanic morphs in the peppered moth Biston betularia. This is due to a single gene with two alleles. The moths with genotypes CC and Cc are melanic (Biston betularia carbonaria), and moths with genotype cc are pale (Biston betularia typica). Field studies in England over a 50-year period suggest that melanic forms increased in proportion in polluted areas because of the phenomenon of industrial melanism. This shift toward darker melanic forms is attributed to an heightened predation by birds of the light-colored moths, because the lighter forms could more easily be seen on the tree trunks which have been increasingly darkened from pollution. However, Wells (2000) pointed out that there are flaws in the studies, including the fact that peppered moths do not normally alight on tree trunks, and there are even inverse correlations with pollution in many situations. Currently, the genotypic frequencies of both forms exhibit equilibrium, assumably because each form has a selective advantage of equal intensity.

In humans, the existence of the A, B, AB, and O blood groups is the example of balanced polymorphism. While the genotypic frequencies within different population may vary, they remain constant from generation to generation within one population. This is because none of them have a selective advantage over the other. 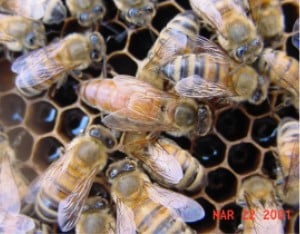 Social insects (such as bees, wasps, ants, and termites) have members differentiated into distinct castes for division of labor. However, division of labor is accompanied by structural, functional, and behavioral specialization leading to a clear balanced polymorphism. In these insects, caste determination takes place due to genetics as well as extrinsic factors like nutrition. Reproductive caste males develop parthenogenically from unfertilized haploid eggs, whereas the queens, workers, and soldiers are diploid females differentiated from fertilized eggs. Differentiation of queens from others takes place just because of quality and quantity of food served. For example, in case of bees, royal jelly given to the female larva causes her to develop into a queen, while honey and pollen (bee bread) causes her to develop into a worker.

Some cnidarians are noted for their remarkable phenomenon of polymorphism. This is associated with the division of labor. Theoretically, members of Cnidaria have life cycles that alternate between two forms: Asexual polyps (generally sessile, with the body as a vase shaped form), which are nutritive in function; and sexual, free-swimming forms called medusae (singular medusa, the body in a bell-shaped form), which are reproductive in function. In reality, not all cnidarians exhibit these two forms. The Anthozoa (corals and sea anemones) live only as polyps and the Cubozoa (box jellyfish) live only as medusa. Furthermore, the Scyphozoa (jellyfish) are mostly in the medusa form.

Most hydrozoans (Hydrozoa), such as Obelia and Tubularia, do show dimorphism. But the siphonophores (an order of Hydrozoa) like Physalia exhibit the highest degree of polymorphism. They have three kinds of polyploids (namely gastrozooids for nutrition, dactylozooids for defense, and gonozooids for the asexual production of medusae) and four types of medusoids (namely pneumatophore for floating, nectophore for swimming, phyllozooid for protection, and gonophore for bearing gonads).

An example of polymorphism from botany is heterostyly, in which flowers occur in different forms having different relative lengths of the pistil and the stamens. For instance, some cowslip plants (Primula veris) have "pin flowers," in which the style (the elongated middle part of the pistil) reaches the end of the corolla tube causing the stigma (tip of the pistil) to project out of the corolla tube and the stamens to remain hidden halfway in the tube. Other cowslip plants have "thrum flowers," in which the stamens reach the end of the corolla tube and the stigma is hidden inside. Also, thrum flowers produce bigger pollen grains than pin flowers. This polymorphism promotes outbreeding through cross-pollination.

Variations in an organism's DNA sequence without having any phenotypic effect are called neutral polymorphisms. Examples of such polymorphism may include single-nucleotide polymorphisms (SNPs) and restriction-fragment-length polymorphisms (RFLPs). In the SNPs, one of the nucleotides of a codon undergoes change without it becoming a codon of different amino acid, as there are more than one codon for most amino acids. RFLP is a polymorphism usually due to SNP and is characterized by variation in the length of the DNA sequence when cut by the restriction enzyme. However, some SNPs can have phenotypic expression in homozygous condition, (e.g. sickle-cell gene).

In transient polymorphism, one form is gradually being replaced by another. As the name implies, it represents a temporary situation as a by-product of directional natural selection. For example, during the course of industrial melanism, it was held that the melanic form of peppered moth gradually predominated the non-melanic form in the trees of Manchester, England due to selective pecking of the latter (lighter form) by the birds.

Polymorphism is the expression of genetic diversity of a species. This gives each species a flexibility of adaptation in the environment. Further, this is the population level ground for the action of natural selection, leading to change in allele frequencies and then microevolution.

Polymorphism is not only the variability that the individuals of a species can enjoy in the environment, but also a division of labor for effective social organization and utilization of natural resources. In many polymorphic species, the social organization integrates the discrete members similar to the harmony seen among different organs of a single biological organism, thus ensuring the welfare of the whole population and the species as a whole.