Sea anemones are flower-like, filter feeding, marine invertebrates of the order Actinaria of the phylum Cnidaria. Named after a terrestrial flower (the anemone), these aquatic animals are classified with the corals in the Class Anthozoa, which means "flower animals." However, they lack the external or internal calcareous skeletons of the corals, which are classified in several orders. Other members of the Anthozoa class include the tube-dwelling anemones, which belong to the order Ceriantharia. The medusa stage is not known among this class: corals and anemones only appear as polyps.

Although sea anemones can catch fish and other prey items, some species obtain much of their nutrients from symbiotic unicellular algae. Other symbiotic relationships are formed between sea anemones and various fish or crustaceans. Such mutually beneficial symbiotic relationships reflect the harmony of creation. In addition to their ecological values in the marine environment, sea anemones, with their petal-like, often colorful tentacles, provide aesthetic benefit to humans in terms of their beauty of color and form.

The Anthozoa can be divided into two groups: Alcyonaria and Zoantharia (Fautin and Romano 2000). Both subclasses contain species known as corals, which are classified into a number of orders. The Zoantharia also includes the sea anemones (Order Actiniaria) and the tube-dwelling anemones (Order Ceriantharia), among others. Polyps in the subclass Zoantharia without skeletons are generally termed anemones, and those of the order Actiniaria are the sea anemones. 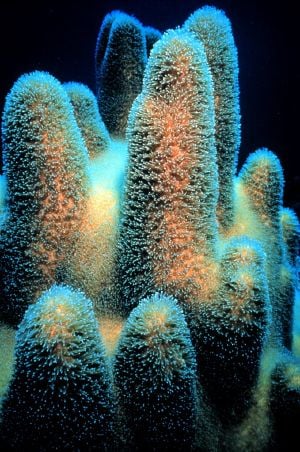 The order of sea anemones, Actiniaria, are typically classified into four suborders and about 47 families:

Most Actinaria do not form hard parts that can be recognized as fossils but a few fossils do exist; Mackenzia, from the Middle Cambrian Burgess Shale of Canada, is the oldest fossil identified as a sea anemone. 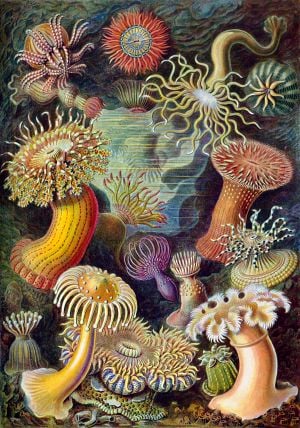 A sea anemone is basically the typical polyp: a small sac, attached to the bottom by an adhesive foot, with a column shaped body ending in an oral disc. The mouth is in the middle of the oral disc, surrounded by tentacles. Anemones have a range of ten tentacles to hundreds.

The tentacles are armed with many cnidocytes, which are unique cells that function as a defense and as a means to capture prey. Cnidocytes contain cnidae, capsule-like organelles capable of everting, giving phylum Cnidaria its name. The cnidae that sting are called nematocysts. Each nematocyst contains a small vesicle filled with toxins—actinoporins—an inner filament and an external sensory hair. When the hair is touched, it mechanically triggers the cell explosion, that fires a harpoon-like structure. This structure attaches to organisms that trigger it, and injects a dose of poison in the flesh of the aggressor or prey. This gives the anemone its characteristic sticky feeling.

The poison is actually a mix of toxins, including neurotoxins, which serve to paralyze and capture the prey, which is then moved by the tentacles to the mouth/anus for digestion inside the gastrovascular cavity. Actinoporins have been reported as highly toxic to fish and crustaceans, which may be the natural prey of sea anemones. In addition to their role in predation, it has been suggested that actinoporins could act, when released in water, as efficient repellents against potential predators. Clownfish are immune to an anemone's sting.

The internal anatomy of anemones is very simple. There is a gastrovascular cavity, which functions as a stomach. This cavity has with a single opening to the outside, which functions as both a mouth and an anus: waste and undigested matter is excreted through the mouth/anus. A primitive nervous system, without centralization, coordinates the processes involved in maintaining homeostasis as well as biochemical and physical responses to various stimuli.

The muscles and nerves in anemones are much simpler than those of other animals. Cells in the outer layer (epidermis) and the inner layer (gastrodermis) have microfilaments grouped together into contractile fibers. These are not true muscles because they are not freely suspended in the body cavity as they are in more developed animals. Since the anemone lacks a skeleton, the contractile cells pull against the gastrovascular cavity, which acts as a hydrostatic skeleton. The stability for this hydrostatic skeleton is caused by the anemone shutting its mouth closed, which keeps the gastrovascular cavity at a constant volume, making it more rigid. 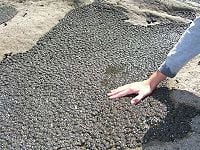 Unlike other classes of cnidarians, anthozoans, including sea anemones, entirely lack the free-swimming medusae stage of the life cycle. The polyp produces eggs and sperm, and the fertilized egg develops into a planula, which then develops directly into another polyp.

A few anemones are parasitic to marine organisms. Anemones tend to stay in the same spot unless conditions are unfavorable, such as a predator attacking them. In the case of an attack, anemones can uproot themselves and swim away to a new location using flexing motions.

The sexes in sea anemones are separate. Both sexual and asexual reproduction may occur. In sexual reproduction, males release sperm, which stimulates females to release eggs, and fertilization occurs. The eggs or sperm are ejected through the mouth. The fertilized egg develops into a planula, which finally settles down somewhere and grows into a single anemone. They can also reproduce asexually by budding (binary fission), which involves pulling apart into two halves, and by pedal laceration, in which small pieces of the pedal disc break off and regenerate into small anemones. Laceration is a process of fragmentation of the basal disk, or by pulling itself into two parts. 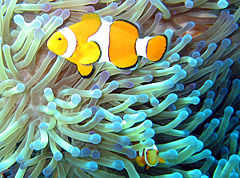 The sea anemone has a foot that in most species attaches itself to rocks or anchors in the sand. However, some species attach to kelp and others are free-swimming. Although not plants and therefore incapable of photosynthesis themselves, many sea anemones form an important symbiosis with certain single-celled green algae species that reside in the animals' gastrodermal cells. These algae may be either zooxanthellae, zoochlorellae, or both. The sea anemone benefits from the products of the algae's photosynthesis, namely oxygen and food in the form of glycerol, glucose, and alanine; the algae in turn are assured a reliable exposure to sunlight, which the anemones actively maintain. The preponderance of species inhabit tropical reefs, although there are species adapted to relatively cold waters, intertidal reefs, and sand/kelp environments.

Some sea anemones form symbiotic relationships with crabs, shrimp, or with anemone fish, also known as clownfish. In the former situation, anemones will either attach or be attached to the shell of a hermit crab (allowed by the crab), providing additional protection for the crab and allowing the anemone to eat scraps when the crab feeds.