Glycerol, also known as glycerin or glycerine, is a sugar alcohol. Its formula may be written as C3H8O3. It is a colorless, odorless, viscous, sweet-tasting liquid that is soluble in water and low in toxicity. It is found in nature in the form of its esters, which are known as glycerides. The glycerides are fundamental constituents of lipids.

Glycerol has numerous uses. For instance, it is added to pharmaceutical formulations as a means of providing lubrication and as a humectant (water-absorbing substance). It is a constituent of cough syrups, elixirs, expectorants, and suppositories. It is an ingredient in toothpaste, mouthwash, soaps, shaving cream, and various skin care and hair care products. It is added to various foods as a solvent for certain flavors; humectant and softening agent in candy and cakes; and as a preservative. It is used in the manufacture of paper, various packaging materials, and nitroglycerin. It is also a softener of yarn and fabric. 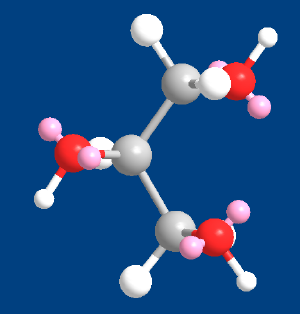 In this 3D model of a glycerol molecule, the carbon atoms are shown as gray spheres, the oxygen atoms are red, and the hydrogen atoms are white. Each oxygen atom has a "lone" (unshared) electron pair, and these electrons are shown in pink. (Model is not to scale.)

Each glycerol molecule has a three-carbon chain, with a hydroxyl group (OH) attached to each carbon atom. To indicate this arrangement, its chemical formula may be written as HOCH2CH(OH)CH2OH. The hydroxyl groups are responsible for making the substance highly soluble in water and hygroscopic. (A hygroscopic substance is one that attracts water molecules from the surrounding environment.) It has only slight solubility in organic solvents such as ethyl acetate and diethyl ether, and it does not dissolve in hydrocarbons. Its melting point is 18 °C (64.4 °F), and its boiling point is 290 °C (554 °F). 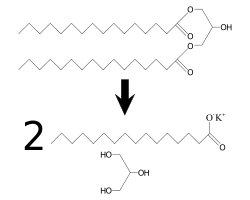 Saponification of a lipid with potassium hydroxide produces the potassium salt of the lipid and glycerol.

Until recently, synthetic glycerol was manufactured on an industrial scale mainly from epichlorohydrin, but this process is no longer economical. Two major methods of producing glycerol from natural products are saponification and transesterification.

Glycerol is a 10 percent by-product of biodiesel manufacture, via the transesterification of vegetable oils. This has led to a glut of crude glycerol on the market. This crude glycerol (typically containing 20 percent water and residual esterification catalyst) can then be refined to a purified form. At the same time, a great deal of research is being conducted to try to make value-added molecules from glycerol, as an alternative to incineration. One such program to add value to this glut of glycerol is the U.K.-based initiative called the Glycerol Challenge.[1] Some potential uses for glycerol include its conversion to propylene glycol,[2] acrolein,[3][4] ethanol,[5] and epichlorhydrin (a raw material for epoxy resins).[6] It could also be used to produce hydrogen gas or citric acid.

Glycerol is a precursor for synthesis of triacylglycerols and phospholipids in the liver and adipose tissue. When the body uses stored fat as a source of energy, glycerol and fatty acids are released into the bloodstream. The glycerol component can be converted to glucose by the liver and provides energy for cellular metabolism.

Depending on physiological conditions, glycerol enters the pathway of glycolysis (breakdown of glucose and other sugars) or gluconeogenesis (glucose formation). Prior to entering either pathway, glycerol is converted to the intermediate known as glyceraldehyde 3-phosphate, in the following steps:

Glycerol is useful for numerous applications. Some of them are listed below.

It was once believed that when used as an emollient, glycerol should never be applied undiluted to the skin. It was thought that just as glycerol draws moisture out of the air to moisten the skin, it would draw moisture out of the skin if it were too concentrated. This fear has proven to be unfounded.

Glycerol has approximately 27 calories per teaspoon and is 60 percent as sweet as sucrose. Although it has about the same food energy as table sugar, it does not raise blood sugar levels, nor does it feed the bacteria that form plaques and cause dental cavities. Glycerol should not be consumed undiluted, as unhydrated glycerol will draw water from tissues, causing blistering in the mouth and gastric distress. As a food additive, glycerol is also known as E number E422.

Danger of contamination with diethylene glycol

On May 4, 2007, the U.S. Food and Drug Administration advised all U.S. makers of medicines to test all batches of glycerine for the toxic diethylene glycol.[11] This follows an occurrence of 100 fatal poisonings in Panama resulting from a Chinese factory deliberately falsifying records in order to export the cheaper diethylene glycol as the more expensive glycerol. Glycerine and diethylene glycol are similar in appearance, smell, and taste. The U.S. Federal Food, Drug, and Cosmetic Act was passed following the 1937 "Elixir Sulfanilamide" incident of poisoning caused by diethylene glycol contamination of medicine.