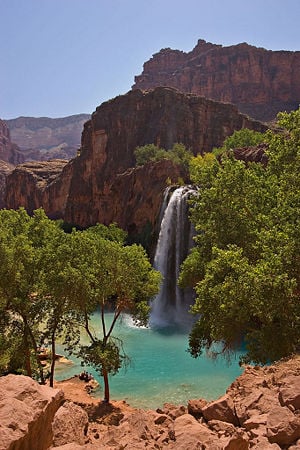 Water is the most common solvent. Here, the water of Havasu Falls appears turquoise because of the presence of high concentrations of dissolved lime.

The most familiar and widely used solvent is water. Other commonly used solvents are organic (carbon-containing) compounds that are referred to as organic solvents. These solvents are usually clear, colorless liquids and many have a characteristic odor.

Solvents can be used to extract soluble materials from a mixture. The most common example of that is the brewing of coffee or tea with hot water. Common uses for organic solvents are in dry cleaning (such as tetrachloroethylene), as paint thinners (such as toluene, turpentine), as nail polish removers and glue solvents (acetone, methyl acetate, ethyl acetate), in spot removers (such as hexane, petrol ether), in detergents (citrus terpenes), in perfumes (ethanol), and in chemical syntheses. The use of inorganic solvents (other than water) is typically limited to research chemistry and some technological processes.

Solvents and solutes can be broadly classified into polar (hydrophilic) and nonpolar (lipophilic). The polarity can be measured as the dielectric constant or the dipole moment of a compound. The polarity of a solvent determines what type of compounds it is able to dissolve and with what other solvents or liquid compounds it is miscible.

Another important property of solvents is boiling point. This also determines the speed of evaporation. Small amounts of low-boiling solvents like diethyl ether, dichloromethane, or acetone will evaporate in seconds at room temperature, while high-boiling solvents like water or dimethyl sulfoxide need higher temperatures, an air flow, or the application of vacuum for fast evaporation.

Most organic solvents have a lower density than water, which means they are lighter and will form a separate layer on top of water. An important exception: many halogenated solvents like dichloromethane or chloroform will sink to the bottom of a container, leaving water as the top layer. This is important to remember when partitioning compounds between solvents and water in a separatory funnel during chemical syntheses.

To bring the solute into solution, a solvent forms various types of relatively weak chemical interactions with the solute. The three main types of interactions are (in order of increasing strength):

Most organic solvents are flammable or highly flammable, depending on their volatility. Exceptions are some chlorinated solvents like dichloromethane and chloroform. Mixtures of solvent vapors and air can explode. Solvent vapors are heavier than air, they will sink to the bottom and can travel large distances nearly undiluted. Solvent vapors can also be found in supposedly empty drums and cans, posing a flash fire hazard; hence empty containers of volatile solvents should be stored open and upside down.

Both diethyl ether and carbon disulphide have exceptionally low autoignition temperatures which increase greatly the fire risk associated with these solvents. The autoignition temperature of carbon disulphide is below 100°C (212°F), so as a result objects such as steam pipes, light bulbs, hotplates and recently extinguished bunsen burners are able to ignite its vapours.

Ethers like diethyl ether and tetrahydrofuran (THF) can form highly explosive organic peroxides upon exposure to oxygen and light, THF is normally more able to form such peroxides than diethyl ether. One of the most susceptible solvents is diisopropyl ether.

The heteroatom (oxygen) stabilizes the formation of a free radical which is formed by the abstraction of a hydrogen atom by another free radical. The carbon centred free radical thus formed is able to react with an oxygen molecule to form a peroxide compound. A range of tests can be used to detect the presence of a peroxide in an ether, one is to use a combination of iron sulphate and potassium thiocyanate. The peroxide is able to oxidize the ferrous ion to a ferric ion which then form a deep red coordination complex with the thiocyanate. In extreme cases the peroxides can form crystalline solids within the vessel of the ether.

Unless the desiccant used can destroy the peroxides, they will concentrate during distillation due to their higher boiling point. When sufficient peroxides have formed, they can form a crystalline and shock sensitive solid which precipitates. When this solid is formed at the mouth of the bottle, turning the cap may provide sufficient energy for the peroxide to detonate. Peroxide formation is not a significant problem when solvents are used up quickly; they are more of a problem for laboratories which take years to finish a single bottle. Ethers have to be stored in the dark in closed canisters in the presence of stabilizers like butylated hydroxytoluene (BHT) or over sodium hydroxide.

Peroxides may be removed by washing with acidic ferrous sulphate, filtering through alumina, or distilling from sodium/benzophenone. Alumina does not destroy the peroxides; it merely traps them. The advantage of using sodium/benzophenone is that moisture and oxygen is removed as well.

Many solvents can lead to a sudden loss of consciousness if inhaled in large amounts. Solvents like diethyl ether and chloroform have been used in medicine as anesthetics, sedatives, and hypnotics for a long time. Ethanol is a widely used and abused psychoactive drug. Diethyl ether, chloroform, and many other solvents (e.g. from gasoline or glues) are used recreationally in glue sniffing, often with harmful long term health effects like neurotoxicity or cancer. Methanol can cause internal damage to the eyes, including permanent blindness.

It is interesting to note that ethanol has a synergistic effect when taken in combination with many solvents. For instance a combination of toluene/benzene and ethanol causes greater nausea/vomiting than either substance alone.

A major pathway to induce health effects arises from spills or leaks of solvents that reach the underlying soil. Since solvents readily migrate substantial distances, the creation of widespread soil contamination is not uncommon; there may be about 5000 sites worldwide that have major subsurface solvent contamination; this is particularly a health risk if aquifers are affected.

Some solvents including chloroform and benzene (an ingredient of gasoline) are carcinogenic. Many others can damage internal organs like the liver, the kidneys, or the brain.

The solvents are grouped into nonpolar, polar aprotic, and polar protic, and ordered by increasing polarity. The polarity is given as the dielectric constant. The density of nonpolar solvents that are heavier than water is shown in bold.