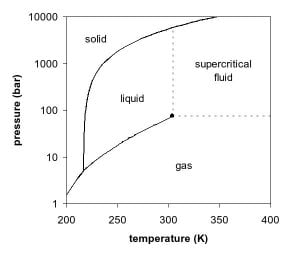 Figure 1. As shown by this pressure-temperature phase diagram, carbon dioxide is a supercritical fluid above its critical point of 301.1 K and 73.8 bar.

A supercritical fluid is any substance at a temperature and pressure above its thermodynamic critical point. It has the unique ability to diffuse through solids like a gas, and dissolve materials like a liquid. Additionally, it can readily change in density upon minor changes in temperature or pressure. These properties make it suitable as a substitute for organic solvents in a process called Supercritical Fluid Extraction. Carbon dioxide and water are the most commonly used supercritical fluids. 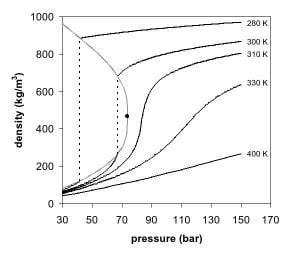 In 1822, Baron Charles Cagniard de la Tour discovered the critical point of a substance in his famous cannon barrel experiments. Listening to discontinuities in the sound of a rolling flint ball in a sealed cannon filled with fluids at various temperatures, he observed the critical temperature. Above this temperature, the densities of the liquid and gas phases become equal and the distinction between them disappears, resulting in a single supercritical fluid phase. In Table 1, the critical properties are shown for some components, which are commonly used as supercritical fluids.

For engineering purposes, supercritical fluids can be regarded as “hybrid solvents” with properties between those of gases and liquids, such as a solvent with a low viscosity, high diffusion rates and no surface tension. In the case of supercritical carbon dioxide, the viscosity is in the range of 20–100 µPa·s (0.02-0.1 cP), where liquids have viscosities of approximately 500–1000 µPa·s (0.5-1.0 cP) and gases approximately 10 µPa·s (0.01 cP), respectively. Diffusivities of solutes in supercritical carbon dioxide are up to a factor 10 higher than in liquid solvents. Additionally, these properties are strongly pressure-dependent in the vicinity of the critical point, making supercritical fluids highly tunable solvents. Of the components shown in Table 1, carbon dioxide and water are the most frequently used in a wide range of applications, including extractions, dry cleaning and chemical waste disposal. In polymer systems, ethylene and propylene are also widely used, where they act both as a solvent and as the reacting monomer.

One of the most important properties of supercritical fluids is that their solvating properties are a complex function of their pressure and temperature, independent of their density. This means that (taking a very simplistic approach) raw materials containing

soluble products can be selectively extracted or selectively precipitated to obtain ultra-pure extracts. Although the details are much more complex than this, it remains the dominant chemical-free technology for the production of decaffeinated coffee, nicotine-free tobacco, and many of the world's best spice extracts.

Supercritical carbon dioxide refers to carbon dioxide with some unique properties. Carbon dioxide usually behaves as a gas in air or as a solid in dry ice. If the temperature and pressure are both increased, it can adopt properties midway between a gas and a liquid. It behaves like a supercritical fluid above its critical temperature (31.1°C) and pressure (73 atm), expanding to fill its container like a gas, but with a density like that of a liquid. Supercritical CO2 is becoming an important commercial and industrial solvent due to its role in compound extraction as well as its low toxicity and environmental impact. The relatively low temperature of the process and the stability of CO2 also allows most compounds to be extracted with little damage or denaturing.

Supercritical carbon dioxide is gaining popularity amongst coffee manufacturers looking to move away from some of the classic decaffeinating solvents of the past; many of which have led to public outcry because of real or perceived dangers related to their use in food preparation. Supercritical CO2 is forced through the green coffee beans and then sprayed with water at high pressure to remove the caffeine. The caffeine can then be isolated for resale to, for example, the pharmaceutical industry or beverage manufacturers by passing the water through activated charcoal filters or by distillation, crystallization, or reverse osmosis.

Supercritical carbon dioxide is also becoming a more common process for extracting volatile oils and fragrance compounds from various raw materials that are used in perfumery. The relatively low critical temperature and reactivity of CO2 allows the fragrance compounds to be extracted without extensive damage or denaturing, which will alter their odor.

Supercritical carbon dioxide can be used in cleaning clothes, instead of perchloroethylene (PCE or Perc) or water. This new approach of cleaning clothes was developed and commercialized by Dr. Joseph DeSimone, professor of chemical engineering at North Carolina State University, in Raleigh. Supramics, environmentally beneficial, low-cost substitutes for rigid thermoplastic and fired ceramic, are made using supercritical carbon dioxide as a chemical reagent. The supercritical carbon dioxide in these processes is reacted with the alkaline components of fully hardened hydraulic cement or gypsum plaster to form various carbonates. The sole by-product is ultra-pure water. Because supramics consume and sequester carbon as stable compounds in useful products, they may serve to reduce carbon that would otherwise be released into the environment.

There is considerable work being done to develop an enhanced version of a gas-turbine power production cycle to operate at temperatures near 550°C. This is a significant usage, which could have large implications for bulk thermal and nuclear generation of electricity, because the supercritical properties of carbon dioxide at above 500°C and 20 MPa enable very high thermal efficiencies, approaching 45 percent. This could increase the electrical power produced per unit of fuel required by 40 percent or more. Given the huge volume of extremely polluting fuels used in producing electricity, the potential environmental impact of such an efficient cycle could be very large.[1]

Processes which use supercritical carbon dioxide to produce micro and nano scale particles, often for pharmaceutical uses, are currently being developed. The gas antisolvent process, rapid expansion of supercritical solutions, and supercritical antisolvent precipitation (as well as several related methods) have been shown to process a variety of substances into particles. [2]

Supercritical carbon dioxide is beginning to be used to enhance oil recovery in mature oil fields. At the same time, there is the possibility of using the various "clean coal" technologies which are emerging to combine such enhanced recovery methods with carbon sequestation efforts. Using advanced Fischer-Tropsch digesters instead of conventional furnaces, coal and water is reduced to hydrogen gas, carbon dioxide, and ash. This hydrogen gas can be used to produce electrical power in combined-cycle gas turbines, while the CO2 is captured, compressed to the supercritical state, and injected into geological storage, possibly into existing oil fields to improve yields. The unique properties of supercritical CO2 ensure that it will remain out of the atmosphere.[3]

Supercritical carbon dioxide is also an important emerging natural refrigerant, being used in new, low carbon solutions for domestic heat pumps.[4] These systems are undergoing continuous development with the first commercial supercritical carbon dioxide heat pumps being now marketed. The "EcoCute" systems from Japan, developed by consortium of companies including Mitsubishi, develop high temperature domestic water at with small inputs of electric power by moving heat into the system from their surroundings.

Supercritical carbon dioxide is seen as a promising green solvent because it is non-toxic, and a byproduct of other industrial processes. Furthermore, separation of the reaction components from the starting material is much simpler than with traditional organic solvents.