In physics, surface tension is an effect within the surface layer of a liquid that causes that layer to behave as an elastic sheet. This effect allows insects (such as the water strider) to walk on water. It allows small metal objects such as needles, razor blades, or foil fragments to float on the surface of water, and causes capillary action. Interface tension is the name of the same effect when it takes place between two liquids.

The cause of surface tension Diagram of the forces on a molecule of liquid.

As a result of this minimizing of surface area, the surface will want to assume the smoothest flattest shape it can (rigorous proof that "smooth" shapes minimize surface area relies on use of the Euler-Lagrange Equation). Since any curvature in the surface shape results in higher area, a higher energy will also result. Consequently, the surface will push back on the disturbing object in much the same way a ball pushed uphill will push back to minimize its gravitational energy.

Some examples of the effects of surface tension seen with ordinary water:

Surface tension has a big influence on other common phenomena, especially when certain substances, surfactants, are used to decrease it: Surface tension is represented by the symbol σ, γ or T and is defined as the force along a line of unit length where the force is parallel to the surface but perpendicular to the line. One way to picture this is to imagine a flat soap film bounded on one side by a taut thread of length, L. The thread will be pulled toward the interior of the film by a force equal to γL. Surface tension is therefore measured in newtons per meter (N·m-1), although the cgs unit of dynes per cm is normally used.[3]

A better definition of surface tension, in order to treat its thermodynamics, is work done per unit area. As such, in order to increase the surface area of a mass of liquid an amount, δA, a quantity of work, γδA, is needed. Since mechanical systems try to find a state of minimum potential energy, a free droplet of liquid naturally assumes a spherical shape. This is because a sphere has the minimum surface area for a given volume. Therefore surface tension can be also measured in joules per square meter (J·m-2), or, in the cgs system, ergs per cm2.

The equivalence of both units can be proven by dimensional analysis. 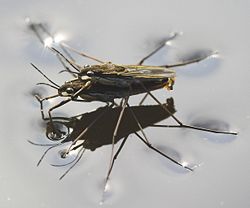 The photo of the water striders also illustrates the notion of surface tension being like having an elastic film over the surface of the liquid. In the surface depressions at their feet it is easy to see that the reaction of that imagined elastic film is exactly countering the weight of the insects.

Liquid in a vertical tube

Diagram of a Mercury Barometer

An old style mercury barometer consists of a vertical glass tube about 1 cm in diameter partially filled with mercury, and with a vacuum in the unfilled volume (see diagram to the right). Notice that the mercury level at the center of the tube is higher than at the edges, making the upper surface of the mercury dome-shaped. The center of mass of the entire column of mercury would be slightly lower if the top surface of the mercury were flat over the entire cross-section of the tube. But the dome-shaped top gives slightly less surface area to the entire mass of mercury. Again the two effects combine to minimize the total potential energy. Such a surface shape is known as a convex meniscus. 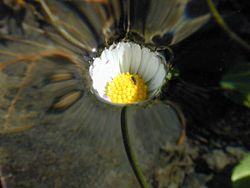 If a tube is sufficiently narrow and the liquid adhesion to its walls is sufficiently strong, surface tension can draw liquid up the tube in a phenomenon known as capillary action. The height the column is lifted to is given by:[5]

Pool of liquid on a nonadhesive surface

Pouring mercury onto a horizontal flat sheet of glass results in a puddle that has a perceptible thickness (do not try this except under a fume hood. Mercury vapor is a toxic hazard). The puddle will spread out only to the point where it is a little under half a centimeter thick, and no thinner. Again this is due to the action of mercury's strong surface tension. The liquid mass flattens out because that brings as much of the mercury to as low a level as possible. But the surface tension, at the same time, is acting to reduce the total surface area. The result is the compromise of a puddle of a nearly fixed thickness.

The same surface tension demonstration can be done with water, but only on a surface made of a substance that the water does not adhere to. Wax is such a substance. Water poured onto a smooth, flat, horizontal wax surface, say a waxed sheet of glass, will behave similarly to the mercury poured onto glass.

In reality, the thicknesses of the puddles will be slightly less than these calculated values. This is due to the fact that surface tension of the mercury-glass interface is slightly less than that of the mercury-air interface. Likewise, the surface tension of the water-wax interface is less than that of the water-air interface. The contact angle, as described in the previous subsection, determines by how much the puddle thickness is reduced from the theoretical.

To find the shape of the minimal surface bounded by some arbitrary shaped frame using strictly mathematical means can be a daunting task. Yet by fashioning the frame out of wire and dipping it in soap-solution, an approximately minimal surface will appear in the resulting soap-film within seconds. Without a single calculation, the soap-film arrives at a solution to a complex minimization equation on its own.[5] [6] 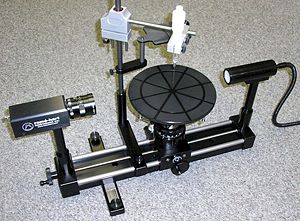 Surface Tension can be measured using the pendant drop method on a ramé-hart goniometer.

As stated above, the mechanical work needed to increase a surface is

. For a reversible process,

is Gibbs free energy and

Influence of temperature on surface tension 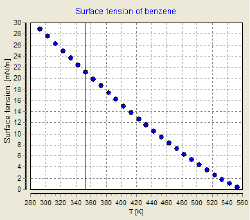 Temperature dependency of the surface tension of benzene

Solutes can have different effects on surface tension depending on their structure:

Pressure jump across a curved surface

If viscous forces are absent, the pressure jump across a curved surface is given by the Young-Laplace Equation, which relates pressure inside a liquid with the pressure outside it, the surface tension and the geometry of the surface.

This equation can be applied to any surface:

The table shows an example of how the pressure increases, showing that for not very small drops the effect is subtle but the pressure difference becomes enormous when the drop sizes approach the molecular size (a drop with a 1 nm radius contains approximately 100 water molecules), this can be attributed to the fact that at a very small scale the laws of continuum physics cannot be applied anymore.

Starting from Clausius-Clapeyron relation Kelvin Equation II can be obtained; it explains that because of surface tension, vapor pressure for small droplets of liquid in suspension is greater than standard vapor pressure of that same liquid when the interface is flat. That is to say that when a liquid is forming small droplets, the concentration of vapor of that liquid in the surroundings is greater, this is due to the fact that the pressure inside the droplet is greater than outside.

is the standard vapor pressure for that liquid at that temperature and pressure.

is the molar volume.

is the gas constant

is the Kelvin radius, the radius of the droplets.

This equation is used in catalyst chemistry to assess mesoporosity for solids.[8]

The table shows some calculated values of this effect for water at different drop sizes:

The effect becomes clear for very low drop sizes, as a drop on 1 nm radius has about 100 molecules inside, which is a quantity small enough to require a quantum mechanics analysis.

Surface tension values[10] for some interfaces at the indicated temperatures. Note that the SI units millinewtons per meter (mN·m–1) are equivalent to the cgs units, dynes per centimeter (dyn·cm–1).

Retrieved from https://www.newworldencyclopedia.org/p/index.php?title=Surface_tension&oldid=1030360
Categories:
Hidden category:
This page was last edited on 8 January 2020, at 02:59.
Content is available under Creative Commons Attribution/Share-Alike License; additional terms may apply. See Terms of Use for details.