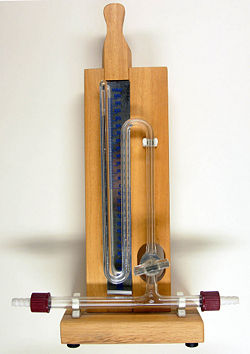 A barometer with a mercury column.

A barometer is an instrument used to measure atmospheric pressure. It can measure the pressure exerted by the atmosphere by using water, air, or mercury. From the variation of air pressure, one can forecast short-term changes in the weather. Numerous measurements of air pressure are used to help find surface troughs, high pressure systems, and frontal boundaries.

Schematic drawing of a simple mercury barometer with vertical mercury column and reservoir at base.

A standard mercury barometer has a glass column of about 30 inches (about 76 cm) in height, closed at one end, with an open mercury-filled reservoir at the base. Mercury in the tube adjusts until the weight of the mercury column balances the atmospheric force exerted on the reservoir. When the atmospheric pressure is high, it places more downward force on the reservoir, forcing mercury higher in the column. When the pressure is low, allows the mercury to drop to a lower level in the column by lowering the downward force placed on the reservoir. If the temperature of the instrument is higher, it reduces the density of the mercury. For this reason, the scale for reading the height of the mercury column needs to be adjusted to compensate for this effect, according to the indication of a mercury thermometer included in the instrument case.

The first barometer of this type was devised in 1643 by Evangelista Torricelli. Torricelli had set out to create an instrument to measure the weight of air, or air pressure, and to study the nature of vacuums. He first used water, but it required a glass tube 60 feet long. He then used mercury, perhaps on a suggestion from Galileo Galilei, because it is significantly denser than water. To create a vacuum with mercury takes less than three feet, which makes its use more practical than a water barometer.[1]

Torricelli documented that the height of the mercury in a barometer changed slightly each day and concluded that this was due to the changing pressure in the atmosphere. He wrote: "We live submerged at the bottom of an ocean of elementary air, which is known by incontestable experiments to have weight."

The mercury barometer's design gives rise to the expression of atmospheric pressure in inches or millimeters (torr): the pressure is quoted as the level of the mercury's height in the vertical column. A pressure of one atmosphere is equivalent to about 29.9 inches, or 760 millimeters, of mercury. The use of this unit is still popular in the United States, although it has been disused in favor of SI or metric units in other parts of the world. Barometers of this type normally measure atmospheric pressures between 28 and 31 inches of mercury.

Design changes to make the instrument more sensitive, simpler to read, and easier to transport resulted in variations such as the basin, siphon, wheel, cistern, Fortin, multiple folded, stereometric, and balance barometers. Fitzroy barometers combine the standard mercury thermometer with a thermometer, as well as a guide of how to interpret pressure changes.[2] 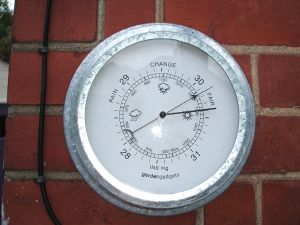 An aneroid barometer uses a small, flexible metal box called an aneroid cell. This aneroid capsule(cell) is made from an alloy of beryllium and copper.[3] The box is tightly sealed after some of the air is removed, so that small changes in external air pressure cause the cell to expand or contract. This expansion and contraction drives mechanical levers and other devices which are displayed on the face of the aneroid barometer. Many models include a manually set needle that is used to mark the current measurement so a change can be seen. A barograph, which records a graph of some atmospheric pressure, uses an aneroid barometer mechanism to move a needle on a smoked foil or to move a pen upon paper, both of which are attached to a drum moved by clockwork.[4] 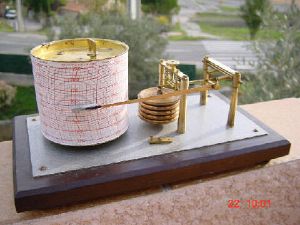 A barometer is commonly used for weather prediction, as high air pressure in a region indicates fair weather while low pressure indicates that storms are more likely. When used in combination with wind observations, reasonably accurate short term forecasts can be made.[5] Simultaneous barometric readings from across a network of weather stations allow maps of air pressure to be produced, which were the first form of the modern weather map when created in the nineteenth century. When isobars (lines of equal pressure) are drawn on such a map, we get a contour map showing areas of high and low pressure.

Localized high atmospheric pressure acts as a barrier to approaching weather systems, diverting their course. Low atmospheric pressure, on the other hand, represents the path of least resistance for a weather system, making it more likely that low pressure will be associated with increased storm activities. Thus, if barometric pressure is falling, it indicates the approach of deteriorating weather or some form of precipitation. Conversely, if barometric pressure is rising, it indicates the coming of fair weather or no precipitation. 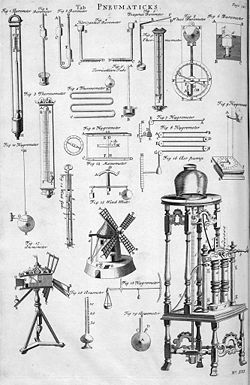 The density of mercury will change with temperature, so a reading must be adjusted for the temperature of the instrument. For this purpose a mercury thermometer is usually mounted on the instrument. No such compensation is required for an aneroid barometer.

As the air pressure will be decreased at altitudes above sea level (and increased below sea level) the actual reading of the instrument will be dependent upon its location. This pressure is then converted to an equivalent sea-level pressure for purposes of reporting and for adjusting aircraft altimeters (as aircraft may fly between regions of varying normalized atmospheric pressure owing to the presence of weather systems). Aneroid barometers have a mechanical adjustment for altitude that allows the equivalent sea level pressure to be read directly and without further adjustment if the instrument is not moved to a different altitude.