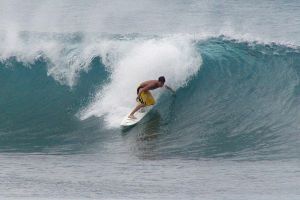 Surfing is a surface water sport in which the participant is carried along the face of a breaking wave as it approaches shore, usually on a surfboard. In addition to surfboards, surfers make use of knee-boards, body boards (aka boogie boards), kayaks, surf skis, and their own bodies. Surfing-related sports, such as paddle-boarding and sea kayaking, do not require waves. Other derivative sports such as kite surfing and windsurfing rely on wind for power. Surfing is one sport that emphasizes humankind's ability to master nature, but always recognizing that such mastery is fleeting.

Surfing was first recorded by Lieutenant James Cook during his third expedition to the Pacific, that led the group to Hawaii in 1778. Cook and his men were actually looking for a passage to the Atlantic, but after failing to do so, Cook led his men to the big island of Hawaii. It was there that James Cook was killed by Hawaiians when he tried to kidnap the chief of the island.[1] James King was made First Lieutenant, and was the man who recorded two pages of notes on the sport of surfing. It was King who recorded the first written description of surfing by a European.

While there is no time table for the exact starting point of surfing, anthropologists estimate that it started around the time of the movement of the Polynesians from Asia to the eastern pacific around 2000 B.C.E. The first Polynesians arrived in Hawaii around 400 C.E. and brought with them an extensive knowledge of the ocean. They brought their lifestyle with them to Hawaii, including the act of playing on paipo or belly boards.

When James Cook made his recording, surfing was already deeply rooted into Hawaiian culture and history. Parks and beaches are named after historical surfing incidents that occurred there, and kahuna experts use their special chants to christen new surfboards, bring large waves, and even give courage to men and women who are brave enough to challenge the big waves themselves.

Hawaiian culture at the time of Cook's recording was divided into different social classes. Since surfing was such a large part of this culture, beaches and surf zones were divided by class, with some being surfed by only chiefs and commanders, and others for all to use. Chiefs usually rode on longer boards, sometimes reaching lengths as long as 24 feet, and normal riders usually used 12 foot boards.

The beginning of the nineteenth century saw the start of the decline of the kapu system of government, and with it, tremendous change to surfing. Surf chants, board creating, and other sacred aspects of surfing were all abolished, removing most of the tremendous history that the sport had.

In 1820, the first Christian missionaries arrived from England, bringing rules that made the locals wear more clothes, increase work, and decrease their recreational activity. Hiram Bingham, a person involved with the movement at the time said, "The decline and discontinuation of the use of the surfboard, as civilization advances, may be accounted for by the increase in modesty, industry and religion, without supposing, as some have affected to believe, that missionaries caused oppressive enactments against it."[2] Surfing continued to decline steadily as European influence continued to increase.

In 1905, Hawaiians began a surf club to generate local interest in the sport. By 1911, the club had over 100 members surfing on the beach at Waikiki, and by 1915, the group had 1200 members. In 1912, famous swimmer and surfer Duke Paoa Kahanamoku did several surfing demonstrations in Santa Monica and Corona Del Mar that created incredible excitement about the sport. Later in 1915, Duke did a swimming exhibition on behalf of the New South Wales Swimming Association. At the time of the demonstration, Australians were not very aware of surfing, but that changed quickly when Duke showed off his board made out of the native sugar pain from Australia. By himself, Duke put the country of Australia on the surfing map, and can be credited today for turning it into a surfing power.

Rabbit Kekai, Woody Brown, and John Kelly were three surfers that were at the top of surfing during the changing times of the sport. Surfboards were becoming lighter, and beaches like the Sunset Beach were being surfed for the first time. Surfing was growing slowly from the early 1900s to 1960, but when television became a large part of culture, the sport exploded.

Today surfing is a multi-million dollar industry. Surf videos and movies are produced frequently to encourage young rides into the sport of surfing. Clothing companies specialize in surfing equipment and gear, and professional riders often have sponsorships with these corporations. What once was an activity for the chiefs of Hawaii has become a popular sport for all. Surfing can be done on various pieces of equipment, including surfboards, body-boards, wave skis, knee-boards and surf mat. Surfboards were originally made of solid wood and were generally quite large and heavy (often up to 12 feet long and 100 pounds/45 kg). Lighter balsa wood surfboards (first made in the late 1940s and early 1950s) were a significant improvement, not only in portability, but also in increasing maneuverability on the wave.

Most modern surfboards are made of polyurethane foam (with one or more wooden strips or "stringers"), fiberglass cloth, and polyester resin. An emerging surf technology is an epoxy surfboard, which are stronger and lighter than traditional fiberglass. Even newer surfboard designs incorporate materials such as carbon fiber and springy 'fire wire'.

Equipment used in surfing includes a leash (to stop a surfer's board from washing to shore after a "wipe out," and to prevent it from hitting other surfers), surf wax and/or traction pads (to keep a surfer's feet from slipping off the deck of the board), and "fins" (also known as "skegs") which can either be permanently attached ("glassed-on") or interchangeable. In warmer climates swimsuits, surf trunks or board shorts are worn, and occasionally rash guards; in cold water surfers can opt to wear wetsuits, boots, hoods, and gloves to protect them against lower water temperatures.

There are many different surfboard sizes, shapes, and designs in use today. Modern long-boards, generally nine to ten feet in length, are reminiscent of the earliest surfboards, but now benefit from all the modern innovations of surfboard shaping and fin design.

The modern short-board began its life in the late 1960s evolving into today's common "thruster" style short-board, a three fin design, usually around six to seven feet in length.

Midsize boards, often called funboards, provide more maneuverability than a long-board, with more flotation than a short-board. While many surfers find that fun-boards live up to their name, providing the best of both surfing modes, others are critical. "It is the happy medium of mediocrity," writes Steven Kotler. "Fun-board riders either have nothing left to prove or lack the skills to prove anything."[3] There are also various niche styles, such as the "Egg," a long-board-style short board, the "Fish," a short and wide board with a split tail and two or four fins, and the "Gun," a long and pointed board specifically designed for big waves. 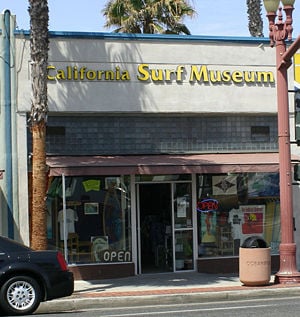 The Science of Surfing

Surfing begins with the surfer seeing a rideable wave on the horizon and then staying ahead of the crest until the surfboard is planing down the wave face, at which point the surfer "pops up." Once the wave has started to carry the surfer forward, the surfer quickly jumps to his or her feet and proceeds to ride down the face of the wave, sometimes staying just ahead of the breaking part (white water) of the wave (in a place often referred to as "the pocket" or "the curl"), sometimes riding out beyond the pocket toward the shoulder of the wave. This is a difficult process in total, where often everything seems to be happening nearly simultaneously, making it hard for the uninitiated to follow the steps. 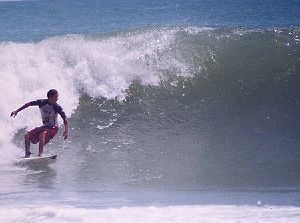 Surfers' skills are tested not only in their ability to control their board in challenging conditions and/or catch and ride challenging waves, but also by their ability to execute various maneuvers such as turning and carving. Some of the common turns have become recognizable tricks such as the "cutback" (turning back toward the breaking part of the wave), the "floater" (riding on the top of the breaking curl of the wave), and "off the lip" (banking off the top of the wave). A newer addition to surfing has been the progression of the "air," a maneuver in which the surfer is able to propel oneself off the wave and re-enter. Some of these maneuvers are now executed to extreme degrees, as with off-the-lips where a surfer over-rotates his turn and re-enters backward, or airs done in the same fashion, recovering either with re-rotation or continuing the over-rotation to come out with his nose forward again.

"Tube riding" is when a surfer maneuvers into a position where the wave curls over the top of him or her, forming a "tube" (or "barrel"), with the rider inside the hollow cylindrical portion of the wave. This difficult and sometimes dangerous procedure is arguably the most coveted and sought after goal in surfing. Surfing, like all water sports, carries the inherent danger of drowning. Although a surfboard may assist a surfer in staying buoyant, it cannot be relied on for flotation, as it can be separated from the user.[4] The use of a leash, which is attached at the ankle or knee, keeps the surfer connected to the board for convenience but should not be used as a safeguard to prevent drowning. The established rule is that if you will not be able to handle the water conditions without your board then you should not go in. Drownings have occurred as a result of leashes becoming caught on reefs holding the surfer underwater. In very large waves such as Waimea or Mavericks, the surfer may not want to be attached to the board, which may be pulled for long distances in the whitewater, holding the surfer underneath the wave. Surfers will often surf in pairs or groups as a safeguard.

A large number of injuries, up to 66 percent,[5] are caused by impact of either a surfboard nose or fins with the surfer's body. Surfboard fins can cause deep lacerations and cuts as well as bruising due to their shape. While these injuries can be minor, they can open the skin to infection from the sea; groups like SAS campaign for cleaner waters to reduce this risk.

There is also a danger of collision from objects under the water surface. These include sand, coral and rocks.[6] Collisions with these objects may cause unconsciousness or even death.

Various types of sea life can cause injuries and even fatalities. Depending on the location of the surfing activity, animals such as sharks, stingrays, and jellyfish may be a danger to surfers.[7] 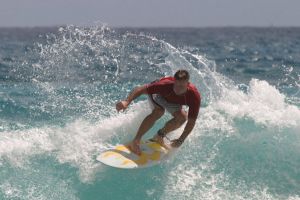