Jellyfish are marine invertebrates belonging to the Scyphozoan class of the Cnidaria phylum. The body of an adult jellyfish is composed of a bell-shaped, jellylike substance enclosing its internal structure, from which the creature's tentacles suspend.

Theoretically, members of Cnidaria have life cycles that alternate between asexual polyps (the body as a vase shaped form), and sexual, free-swimming forms called medusae (singular medusa; the body in a bell-shaped form). However, the Scyphozoa live most of their life cycle as medusa. The class name Scyphozoa means "cup animals," reflective of the dominant medusa form (Towle 1989). The term comes from the Greek word skyphos, denoting a kind of drinking cup.

There is some concern that blooms of jellyfish—congregating of hundreds and even thousands of these animals—correlates with such anthropogenic impacts as overfishing and pollution.

The name of the phylum comes from cnidocytes, or nematocysts, which are specialized cells that carry stinging organelles. Each tentacle of a jellyfish is covered with these stinging cells, which can sting or kill other animals. Most jellyfish use them to secure prey or as a defense mechanism. Sea wasp jellyfish have killed dozens of people along the coast of Australia (Towle 1989). Some, such as Rhizostomae, do not have tentacles at all.

Jellyfish can be found in every ocean in the world. The size of the cups or bells can range from two centimeters across to four meters, and some species trail tentacles for many meters below in the water (Towle 1989). Most jellyfish are passive drifters.

Since jellyfish do not biologically qualify as actual "fish", the term "jellyfish" is considered a misnomer by some, who instead employ the names "jellies" or "sea jellies". The name "jellyfish" is also often used to denote two other classes of cnidarians, Class Hydrozoa (Portuguese Man o' War, Obelia, etc.), or Class Cubozoa (box jellyfish or box jellies). 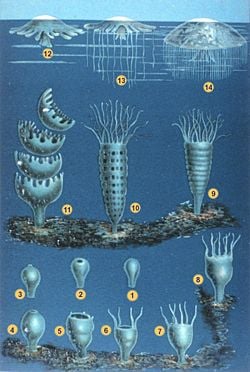 The developmental stages of jellyfish

Most jellyfish pass through two different body forms during their life cycle. The first is the polyp stage; in this phase, the jellyfish takes the form of either a sessile stalk that catches passing food, or a similar free-floating configuration. The polyp's mouth and tentacles are located anteriorly, facing upwards.

In the second stage, the jellyfish is known as a medusa. Medusae have a radially symmetric, umbrella-shaped body called a bell. The medusa's tentacles hang from the border of the bell. Jellyfish are dioecious; that is, they are either male or female. In most cases, to reproduce, a male releases his sperm into the surrounding water. The sperm then swims into the mouth of the female jelly, allowing the fertilization process of the ova to begin. Moon jellies, however, use a different process: their eggs become lodged in pits on the oral arms, which form a temporary brood chamber to accommodate fertilization.

After fertilization and initial growth, a larval form, called the planula, develops from the egg. The planula larva is small and covered with cilia. It develops into a polyp, which again, can be sessile or free-floating depending on the species. The polyp tends to be cup-shaped with tentacles surrounding a single orifice, perhaps resembling a tiny sea anemone.

The polyp may reproduce asexually by budding, the splitting off from the parent organism to form a new organism. In this case, the polyp is called a segmenting polyp, or a scyphistoma. The polyp grows to become a young, and then an adult, medusa.

Many jellyfish can bud off new medusae directly from the medusan stage.

Most jellyfish are passive drifters that feed on small fish and zooplankton that become caught in their tentacles. The tentacles or oral arms are coated with thousands of microscopic nematocysts. Generally, each of these nematocysts has a "trigger" (cnidocil) paired with a capsule containing a coiled stinging filament, as well as barbs on the exterior. Upon contact, the filament will swiftly unwind, launch into the target, and inject toxins. It can then pull the victim into its mouth, if appropriate.

Although most jellyfish are not perniciously dangerous to humans, a few are highly toxic, such as Cyanea capillata. The recently discovered Carukia barnesi is also suspected of causing two deaths in Australia.

Contrary to popular belief, the menacingly infamous Portuguese Man o' War (Physalia) is not actually a jellyfish, but a cnidarian colony of hydrozoan polyps (Class Hydrozoa). 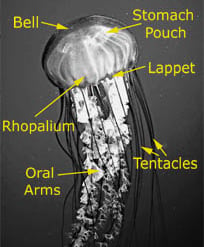 In its adult form, jellyfish are composed of 94–98 percent water.

To compensate for its lack of basic sensory organs and a brain, the jellyfish exploits its nervous system and rhopalia to perceive stimuli, such as light or odor, and orchestrate expedient responses. Jellyfish can detect the touch of other animals using a nervous system called a nerve net, which is found in its epidermis. Impulses to the nerve cells are sent from nerve rings that have collected information from the environment of the jellyfish through the rhopalial lappet, which is located around the animal's body. Jellyfish also have ocelli that cannot form images, but are sensitive to light. The jellyfish can use these to determine up from down, seemingly basing its judgment on the stimuli of sunlight shining on the surface of the water.

Jellyfish have an incomplete digestive system, meaning that the same orifice is used for both food intake and waste expulsion. They are made up of a layer of epidermis, gastrodermis, and a thick jellylike layer called mesoglea that separates the epidermis from the gastrodermis. They are able to digest with the help of the gastrodermis that lines the gastrovascular cavity, where nutrients from their food is absorbed.

Jellyfish have limited control over their movement and mostly free-float, but can use a hydrostatic skeleton that controls the water pouch in their body to actuate vertical movement.

Their shape is not hydrodynamic, which makes them slow swimmers. But speed and low water resistance are not important as they are drifters that feed on plankton and food that passes nearby. It is more important for them that their movements create a current where the water (which contains their food) is being forced within reach of their tentacles. They accomplish this by having a body shaped like a bell, which is rhythmically opened and closed. 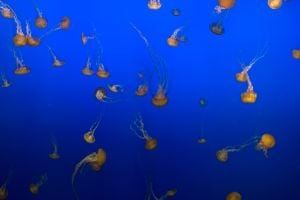 A smack of jellyfish in an aquarium

A group of jellyfish is often called a "smack."

Many species of jellyfish are also capable of congregating into large swarms or "blooms" consisting of hundreds or even thousands of individuals. The formation of these blooms is a complex process that depends on ocean currents, nutrients, temperature, and oxygen content. Jellyfish will sometimes mass breed during blooms, raising ecological concern for a possible jellyfish outbreak.

Some speculate that these blooms may be attributed to overfishing, resulting in jellyfish taking the place of fish that normally would consume the same prey. Increased nutrients in the water, such as that caused by agricultural runoff, has also been cited as an antecedent to the proliferation of jellyfish numbers.

By sampling sea life in a heavily fished region off the coast of Namibia, researchers have found that jellyfish have actually overtaken fish in terms of the biomass they contribute to this ocean region, after intense fishing in recent decades (Lynam et al 2006).

Areas seriously affected by jellyfish blooms include the northern Gulf of Mexico, where "moon jellies have formed a kind of gelatinous net that stretches from end to end across the gulf," and the Adriatic Sea. [1] 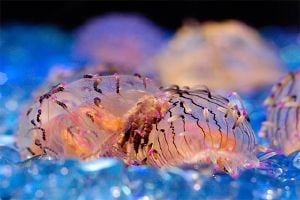 Jellyfish are commonly displayed in aquariums across the United States and in other countries. Often the tank's background is blue with the animals illuminated by side lighting to produce a high contrast effect. In natural conditions, many of the jellies are so transparent that they can be almost impossible to see.

Holding jellies in captivity also presents other problems. For one, they are not adapted to closed spaces or areas with walls, which aquariums by definition have. They also depend on the natural currents of the ocean to transport them from place to place. To compensate for this, most professional exhibits feature water flow patterns. 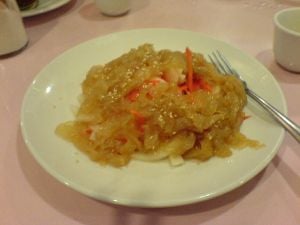 Jellyfish as served in a Chinese restaurant in San Francisco

Sliced and marinated jellyfish bells (often known as sesame jellyfish or jellyfish salad) are a common appetizer in Chinese cuisine. The dish is usually made using sesame seeds, sesame oil, and, occasionally, spring onion. A similar dish appears in Vietnam, with red chili pepper added. A Korean version of the dish, haepari naengchae (cold jellyfish salad), is a summertime delicacy in the country, and is usually served with sweet and sour seasoning with mustard.

Packages of jellyfish bells can be bought at Chinese grocery stores in a salted and semi-desiccated form, which is usually yellow or slightly brownish in color. The salted jellyfish does not have any fishy or unpleasant odors. It has been compared to the texture of elastic bands if dried.

When stung by a jellyfish, first aid may be in order. Though most jellyfish stings are not deadly, some stings may be fatal. Serious stings may cause anaphylaxis and eventual paralysis, and hence people stung by jellyfish (or some box jellyfish, another type of cnidarian) must get out of the water to avoid drowning. In these serious cases, advanced professional care must be sought. This care may include administration of an antivenom and other supportive care such as required to treat the symptoms of anaphylactic shock.

There are three goals of first aid for uncomplicated jellyfish stings: prevent injury to rescuers, inactivate the nematocysts, and remove any tentacles stuck on the patient. To prevent injury to rescuers, barrier clothing should be worn. This protection may include anything from panty hose to wet suits to full-body sting-proof suits. Inactivating the nematocysts, or stinging cells, prevents further injection of venom into the patient.

Once deactivated, the stinging cells must be removed. This can be accomplished by picking off tentacles left on the body. First aid providers should be careful to use gloves or another readily available barrier device to prevent personal injury, and to follow standard precautions. After large pieces of the jellyfish are removed, shaving cream may be applied to the area and a knife edge, safety razor, or credit card may be used to take away any remaining nematocysts (Perkins and Morgan 2004).

Beyond initial first aid, antihistamines, such as diphenhydramine (Benadryl) may be used to control skin irritation (pruritis) (Perkins and Morgan 2004).