Namibia, officially the Republic of Namibia, is a sparsely populated country in Southern Africa on the Atlantic coast. It gained independence from South Africa in 1990 after a protracted war for independence led by the Marxist-controlled South West Africa People's Organization (SWAPO). Namibia has made great progress since independence, but it faces two formidable challenges: Controlling one of the world's worst AIDS epidemics (affecting about one-quarter of the population) and correcting one of the world's worst income disparities. Though it is rich in mineral wealth, including diamonds and uranium, about 50 percent of the population depends on subsistence agriculture. The country's political institutions are still dominated by SWAPO, whose leader became the first president. His hand-picked successor took office in 2005, vowing to speed up land reforms. The majority of commercial farms are white-owned, a holdover from the colonial days when the country was controlled by European nations.

A group of Herero tribesmen, circa 1910

The dry lands of Namibia were inhabited since early times by Bushmen, Damara, Namaqua, and since about the fourteenth century C.E., by immigrating Bantu. Because of its coastal deserts, the region was not extensively explored by Europeans until the nineteenth century, when it came under German control—apart from the port of Walvis Bay, which remained under British control. South Africa seized South West Africa during World War I and occupied it under a League of Nations mandate until after World War II, when it unilaterally annexed the territory, though without international recognition.

In 1966 SWAPO launched a war of independence, but it was not until 1988 that South Africa agreed to end its administration of Namibia, in accordance with a United Nations peace plan for the entire region. Independence came in 1990, and Walvis Bay was ceded to Namibia in 1994.

The head of state is the president, elected by popular vote every five years. The government is headed by the prime minister, who, together with his cabinet, is appointed by the president. SWAPO is still the country's largest party, winning fifty-five seats in the National Assembly in the 2004 election. President Hifikepunye Pohamba, who took office in 2005 after winning 76 percent of the vote, is one of the founders of SWAPO and a longtime confidant of the first president, Sam Nujoma. Most observers said there had been few irregularities in the voting, but some criticized the inefficient vote tabulation system and the unequal access to media coverage and campaign financing by opposition parties. The government controls the principal mass media and intimidates journalists into practicing self-censorship.

Namibia's bicameral parliament consists of the National Council with 26 seats, occupied by two members chosen from each regional council to serve six-year terms; and the National Assembly of 78 seats, of which 72 are elected by popular vote and six non-voting members are appointed by the president. All 78 serve five-year terms. 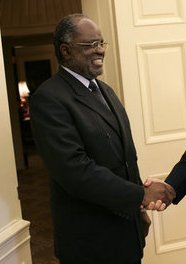 The Assembly is the primary legislative body, with the Council playing an advisory role. The 1990 constitution is noted for being one of the first to include provisions for the protection of the environment. The highest judicial body is the Supreme Court, whose judges are appointed by the president.

About half of the 10,000-member national police belong to a paramilitary unit made up primarily of combatants from the former People's Liberation Army of Namibia. In a number of cases, the government took no action against those responsible for abuses. Twyfelfontein Valley in the Namib Desert

Namibia is bordered by Angola and Zambia to the north, Botswana to the east, and South Africa to the south. A narrow piece of land in the northeast, known as the Caprivi Strip, is the vestige of a corridor granted to Germany so it could have access to the Zambezi River. That strip also borders Zimbabwe at its eastern end.

The Namibian landscape consists primarily of central highlands, of which the highest point is the Brandberg Massif at 8,550 feet (2,606 meters). The central plateau runs from north to south, bordered by the Namib Desert and its coastal plains to the west, 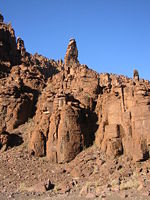 the Orange River to the south, and the Kalahari Desert to the east. In the south, the Fish River Canyon, which reaches a maximum depth of 1,800 feet (550 meters) and is 100 miles (161 kilometers) long, is said to be second largest canyon in the world, after the Grand Canyon in the United States.

The Namibian climate ranges from desert to subtropical, and is generally hot and dry; precipitation is sparse and erratic. The cold, north-flowing Benguela current accounts for some of the low precipitation. Besides the capital city, Windhoek, in the center of the country, other important towns are the ports of Walvis Bay and Swakopmund, as well as Oshakati, Grootfontein, Tsumeb, and Keetmanshoop. 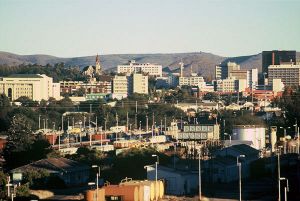 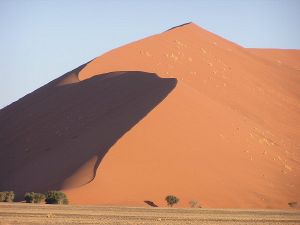 The economy is heavily dependent on the extraction and processing of minerals for export. Mining accounts for 20 percent of the Gross Domestic Product (GDP). Namibia is the fourth largest exporter of non-fuel minerals in Africa, and the world's fifth largest producer of uranium. Rich alluvial diamond deposits make Namibia a primary source for gem-quality diamonds. Namibia also produces large quantities of copper, lead, zinc, and several other minerals. Natural gas was discovered offshore, but the field remains largely untapped. The mining sector only employs about 3 percent of the population. Manufacturing contributes about 11 percent of the GDP. Commercial fishing and tourism are rapidly growing sectors of the economy.

More than half the population depends on agriculture (largely subsistence agriculture) for its livelihood. In the white-dominated commercial sector, agriculture consists primarily of livestock ranching. Namibia must import some of its food. Although the per capita GDP is five times the per capita GDP of Africa's poorest countries, the majority of Namibia's people live in pronounced poverty because of large-scale unemployment (about 35 percent), the great inequality of income distribution, and the large amount of wealth going to foreigners. Some 35 percent of the population lives on $1 a day and another 56 percent lives on $2 a day. The Namibian economy has many close links to South Africa, which is the main trading partner. The government is promoting the deepwater port of Walvis Bay as a gateway for goods to be moved throughout the region by road links. Agreement has been reached on the privatization of several more enterprises in coming years, which should stimulate long-term foreign investment.

The vast majority of Namibia's four thousand commercial farms are white owned, a legacy of the colonial period. After a World Bank report warned that the society's inequalities were a "threat to national cohesion," the government began buying farms to give to the landless, but implementation has been slow. Critics charge that the program is plagued by poor planning and a failure to provide start-up funds for the new farmers. A land tax on foreign landowners is aimed at forcing more of them to sell. The president has said that Namibia will not repeat the mistakes made in Zimbabwe and that any expropriations will be handled in a way that does not disturb the nation's stability and agricultural production. 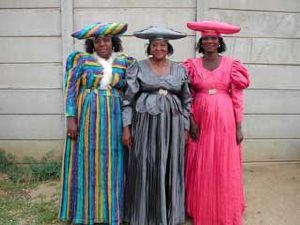 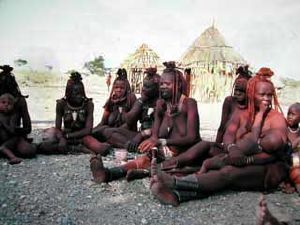 A group of Himba women, near Opuwo, Namibia

Namibia is among the three sovereign countries with the lowest population density. The majority of the population are African Bantu and Khoisan, mostly of the Ovambo tribe, which forms about half of the population, concentrated in the north of the country. In addition to the black Bantu majority, there are large groups of Khoisan (e.g., Nama and Bushmen), who are descendants of the original inhabitants of Southern Africa. Khoisan differ significantly in appearance from both Bantu and whites. There are also two smaller groups of people with mixed racial origins, called "Coloreds" and "Basters," who together make up 8 percent (with the Coloreds outnumbering the Basters two to one). Whites of Dutch, German, British, French, and Portuguese ancestry make up about 8 percent of the population—which is the second largest proportion in sub-Saharan Africa, after South Africa. Most Namibian whites and nearly all those of mixed race are Afrikaans speaking and share similar origins, culture, religion, and genealogy with the white and colored populations of neighboring South Africa. A smaller proportion of whites (around twenty thousand) trace their family origins directly back to German settlers and maintain German cultural and educational institutions. All Portuguese are white miners and settlers from their former colony of Angola.

The majority of the population speaks Afrikaans as a second language, while Oshiwambo (the language of the Ovambo) is the first language of almost half the population. German is spoken by 32 percent of the European community while English, although it is the official language since independence in 1990, is only spoken by 7 percent. The most widely understood language is Afrikaans. However, among the younger generation, the most widely understood language is English. Both Afrikaans and English are used primarily as a second language reserved for public communication, but small first-language groups exist throughout the country. While the official language is English, most of the white population speak either Afrikaans or German, both official languages until 1990, when Namibia became independent. Portuguese is spoken by blacks and whites from Angola.

The results of the latest census, taken in July 2005, show a population of slightly more than 2 million people. Estimates for Namibia explicitly take into account the effects of excess mortality due to AIDS. This can result in lower life expectancy, higher infant mortality and death rates, lower population growth rates, and changes in the distribution of population by age and sex than would otherwise be expected.

Christianity is the major religion, with the Lutheran Church being the largest denomination.

Retrieved from https://www.newworldencyclopedia.org/p/index.php?title=Namibia&oldid=1086878
Categories:
Hidden category:
This page was last edited on 11 November 2022, at 01:15.
Content is available under Creative Commons Attribution/Share-Alike License; additional terms may apply. See Terms of Use for details.