Angola has vast mineral and petroleum reserves. Angolan culture reflects centuries of Portuguese influence, namely the predominance of the Portuguese language and of the Catholic Church, intermingled with a variety of indigenous customs and traditions.

In 1482, when the Portuguese first landed in what is now northern Angola, they encountered the Kingdom of the Congo, which stretched from modern Gabon in the north to the Kwanza River in the south. South of this kingdom were various important states. Ndongo was the most significant, and modern Angola derives its name from the Ndongo word ngola (king). The Portuguese gradually took control of the coastal strip throughout the sixteenth century by a series of treaties and wars and had conquered the Congo and Ndongo states by 1671. Full Portuguese administrative control of the interior did not occur until the beginning of the twentieth century.

Portugal's primary interest in Angola quickly turned to slavery, which began with the purchase from African chiefs of people to work on sugar plantations in São Tomé, Principé, and Brazil. Many scholars agree that by the nineteenth century, Angola was the largest source of slaves not only for Brazil but also the Americas, including the United States. By the end of the nineteenth century, a massive forced labor system had replaced formal slavery and would continue until outlawed in 1961. Forced labor provided the basis for development of a plantation economy and then the mining sector. It was also used to construct three railroads from the coast to the interior.

Colonial economic development did not translate into social development for native Angolans. The Portuguese regime encouraged white immigration, especially after 1950, which intensified racial antagonisms. As decolonization progressed elsewhere in Africa, Portugal rejected independence and treated its African colonies as overseas provinces. Consequently, three independence movements emerged: the Popular Movement for the Liberation of Angola (MPLA) led by Agostinho Neto, with a base among Kimbundu and the mixed-race intelligentsia of Luanda, and links to communist parties in Portugal and the Soviet bloc; the National Front for the Liberation of Angola (FNLA), led by Holden Roberto with an ethnic base in the Bakongo region of the north and links to the United States and the Mobutu regime in Kinshasa; and the National Union for the Total Independence of Angola (UNITA), led by Jonas Savimbi with an ethnic and regional base in the Ovimbundu heartland in the center of the country.

After the 1974 coup in Portugal, the military government promptly agreed to hand over power to a coalition of the three movements. The ideological differences between the three movements eventually led to armed conflict, with FNLA and UNITA forces, encouraged by their respective international supporters, attempting to wrest control of Luanda from the MPLA. The intervention of troops from South Africa on behalf of UNITA and Zaire on behalf of the FNLA in September and October 1975 and the MPLA's importation of Cuban troops in November, effectively internationalized the conflict. Retaining control of Luanda, the coastal strip, and increasingly lucrative oil fields in Cabinda, the MPLA declared independence on November 11, 1975—the day the Portuguese abandoned the capital. UNITA and the FNLA formed a rival coalition government based in the interior city of Huambo. Agostinho Neto became the first president of the MPLA government that was recognized by the United Nations in 1976. Upon his death in 1979, then-Planning Minister José Eduardo dos Santos became president, a position he still holds.

The FNLA's military failures led to its increasing marginalization, but civil war between UNITA and the MPLA continued until 1989. For much of this time, UNITA controlled vast swaths of the interior and was backed by U.S. resources and South African troops. Similarly, tens of thousands of Cuban troops remained to support the MPLA. A U.S.-brokered agreement resulted in withdrawal of foreign troops in 1989 and led to the Bicesse Accord in 1991, which spelled out an electoral process for a democratic Angola under the supervision of the United Nations. UNITA leader Savimbi rejected the results of the first round of the presidential election in 1992, charging fraud, and returned to war. Another peace accord, known as the Lusaka Protocol, was brokered in Lusaka, Zambia, and signed in 1994. This agreement, too, collapsed. The Angolan military launched a massive offensive in 1999 that destroyed UNITA's conventional capacity and recaptured all the major cities previously held by Savimbi's forces. Savimbi returned to guerrilla tactics, which continued until his death in combat in February 2002. Soon after, a cease-fire agreement was reached.

The Front for the Liberation of the Enclave of Cabinda (FLEC), formed in 1974, rejected the agreement that included Cabinda as part of Angola at independence. In 1975, FLEC began guerilla attacks against government targets and kidnapped foreigners in an effort to press for an independent Cabindan state. The simmering revolt finally ended with the signing of a memorandum of understanding in 2006.

Angola changed from a one-party Marxist-Leninist system ruled by the MPLA to a nominal multiparty democracy following the 1992 elections, in which President José Eduardo dos Santos won the first-round election with more than 49 percent of the vote to Jonas Savimbi's 40 percent; a runoff never took place. Although the political situation of the country began to stabilize, regular democratic processes did not prevail until the elections in Angola in 2008 and 2012 and the adoption of a new constitution in 2010, all of which strengthened the prevailing dominant-party system.

The Constitution of 2010 established the broad outlines of government structure and delineates the rights and duties of citizens. The legal system is based on Portuguese law and customary law but is weak and fragmented, and courts operate in only 12 of more than 140 municipalities. A Supreme Court serves as the appellate tribunal; a Constitutional Court does not hold the powers of judicial review. Governors of the 18 provinces are appointed by the president. After the end of the civil war, the regime came under pressure from within as well as from the international community to become more democratic and less authoritarian. Its reaction was to implement a number of changes without substantially changing its character.

The new constitution, adopted in 2010, did away with presidential elections, introducing a system in which the president and the vice-president of the political party that wins the parliamentary elections automatically become president and vice-president. Directly or indirectly, the president controls all other organs of the state, so there is de facto no separation of powers. In the classifications used in constitutional law, this government falls under the category of authoritarian regime. Angola is bordered by Namibia to the south, Zambia to the east, the Democratic Republic of the Congo to the northeast, and the South Atlantic Ocean to the west. Angola's capital, Luanda, lies on the Atlantic coast in the northwest of the country. The oil-rich province of Cabinda is separated from the rest of the nation by the Congo River and a narrow strip of land belonging to the Democratic Republic of the Congo.

Angola is divided into an arid coastal strip stretching from Namibia to Luanda; a wet, interior highland; a dry savanna in the interior south and southeast; and rainforests in the north and in Cabinda. The Zambezi River and several tributaries of the Congo River have their sources in Angola. 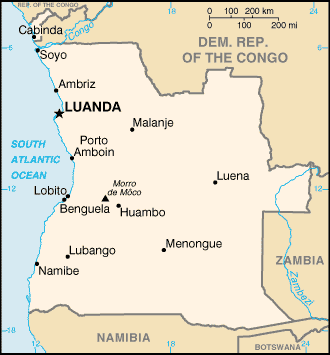 Angola has diamonds, oil, gold, copper, and rich wildlife (which was dramatically depleted during the civil war), forest, and fossil fuels. Since independence, oil and diamonds have been the most important economic resource. Smallholder and plantation agriculture dramatically dropped in the Angolan Civil War, but began to recover after 2002.

Angola's economy has in recent years moved on from the disarray caused by a quarter-century of Angolan civil war to become the fastest-growing economy in Africa and one of the fastest-growing in the world. China is Angola's biggest trade partner and export destination as well as the fourth-largest source of imports.

Although the country's economy has grown significantly since Angola achieved political stability in 2002, mainly due to fast-rising earnings in the oil sector, Angola continues to face huge social and economic problems. These are in part a result of almost continual armed conflict from 1961 on, although the highest level of destruction and socio-economic damage took place after the 1975 independence, during the long years of civil war. The enormous differences between the regions pose a serious structural problem for the Angolan economy, illustrated by the fact that about one third of economic activities are concentrated in Luanda and neighboring Bengo province, while several areas of the interior suffer economic stagnation and even regression. 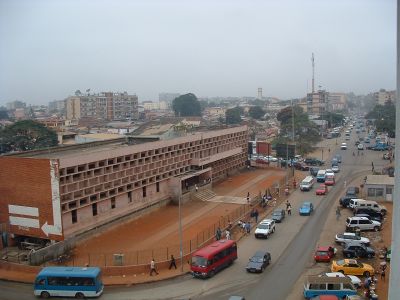 The civil war ravaged the country's political institutions and resulted in massive internal displacement. Many people fled as refugees to neighboring countries. By 2005, after peace was restored, an estimated four million people had returned to their homes but forty thousand to sixty thousand remained as internally displaced persons (IDPs). Daily conditions of life throughout the country, especially Luanda (with a population of approximately four million), mirror the collapse of government as well as many social institutions. The agricultural, health care, education, water, and transportation infrastructures were destroyed during the war. Hospitals lack medicines or basic equipment, schools operate without books, and public employees often do without basic supplies for their day-to-day work. An estimated 80,000 Angolans are victims of land mines.

Angola has three main ethnic groups, each speaking a Bantu language: Ovimbundu, Kimbundu , and Bakongo. Mestiços (Angolans of mixed European and African origins) and a small population of whites make up the remainder. Portuguese make up the largest non-Angolan population. Portuguese is both the official and predominant language, spoken in the homes of about two-thirds of the population and as a secondary language by many more.