Kidnapping (depicted in the background) in Luzerner Schilling, written and illustrated by Diebold Schilling the Younger, 1513

Kidnapping is the crime of taking away of a person by force, deceit, or threat and detaining that person against their will. While the term “kidnapping” originally referred to the abduction of children (from the word "kid" meaning child) it has come to be used for victims of all ages. There are many aims of kidnappers including the enslavement of their victims, marriage to their victims, and extortion of ransom money. Despite strict laws, serious efforts by law enforcement, and vigorous prosecution, kidnapping continues to be a problem in the world today, particularly in connection with human trafficking in which the victims are often forced into prostitution and other forms sexual abuse.

As humankind becomes more aware of the need to recognize all people as members of the same human family, living according to our conscience, and treating each other with love and respect, it can be expected that crimes of this nature will finally disappear and kidnapping will no longer occur.

Kidnapping is derived from "kid" = "child" and "nap" (from "nab") = "snatch," and was first recorded in 1673. It was originally used as a term for the practice of stealing children for use as servants or laborers in the American colonies.[1] It has come to mean any illegal capture or detention of a person or people against their will, regardless of age, such as for ransom; since 1768 the term "abduction" was also used in this sense.

In criminal law, kidnapping is the taking away or asportation of a person against the person's will, usually to hold the person in false imprisonment, a confinement without legal authority. This is often done for ransom or in furtherance of another crime. The majority of jurisdictions in the United States retain the "asportation" element for kidnapping, where the victim must be confined in a bounded area against their will and moved. Any amount of movement will suffice for the requirement, even if it is moving the abducted to a house next door.

In the terminology of the common law in many jurisdictions, the crime of kidnapping is labeled abduction when the victim is a woman (according to Black's Law Dictionary). In modern usage, kidnapping or abduction of a child is often called child stealing, particularly when done not to collect a ransom, but rather with the intention of keeping the child permanently (often in a case where the child's parents are divorced or legally separated, whereupon the parent who does not have legal custody will commit the act; then also known as "child napping").

"Child abduction" or "child stealing" can refer to children being taken away without their parents' consent, but with the child's consent.

Bride kidnapping is a term often applied more loosely, to include any bride physically abducted against the will of her parents, even if she is willing to marry the abductor. This practice is traditional amongst certain nomadic peoples of Central Asia. It has seen resurgence in Kyrgystan since the fall of the Soviet Union and the subsequent erosion of women's rights.[2]

Child abduction is the kidnapping of a child (or baby) by an older person.

While cases have been reported from antiquity, this phenomenon has taken on greater awareness as a result of movies and television series depictions of people who remove children from strangers to bring up as their own often, after the death of their own child. 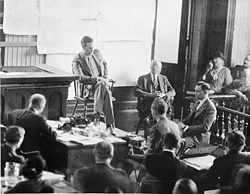 Charles Lindbergh on the witness stand

Perhaps the most feared (although not the most common) kind of abduction is removal by a stranger. The stereotypical version of stranger abduction is the classic form of "kidnapping," exemplified by the Lindbergh kidnapping which involved the abduction and murder of Charles Augustus Lindbergh, Jr., the toddler son of world-famous aviator Charles Lindbergh and Anne Morrow Lindbergh, in 1932.

In the standard scenario, the child is detained, transported some distance, held for ransom or with intent to keep the child permanently. The kidnapping of John Paul Getty III, grandson of famous industrialist J. Paul Getty was one of the most infamous kidnappings of the twentieth century. He was kidnapped at age 16, on July 10, 1973, in Rome, Italy, and a ransom of $17 million was demanded for his safe return. As Paul III was so rebellious, when the first ransom message arrived, the family suspected a ploy by the teenager to extract money from his miserly grandfather. In November, an envelope containing a lock of hair and a human ear was delivered to a daily newspaper, with a threat of further mutilation unless $3.2 million was paid over: "This is Paul’s ear. If we don’t get some money within 10 days, then the other ear will arrive. In other words, he will arrive in little bits." Paul III was found alive in southern Italy shortly after the ransom was paid, but severely traumatized. His kidnappers were never caught. In the most unfortunate cases, such as the Lindbergh case, the child suffers death at the hands of the kidnappers.

These instances are, however, rare. A study commissioned by the U.S. Department of Justice, Office of Juvenile Justice and Delinquency Prevention found that there were only approximately 115 stranger abductions in 1999.[3]

Removal by stranger to raise as own

A very small number of abductions result from women who kidnap babies (or other young children) to bring up as their own. These women are often unable to have children of their own and seek to satisfy their unmet psychological need by abducting a child rather than by adopting. The crime is often premeditated, with the woman often simulating pregnancy to reduce suspicion when a baby suddenly appears in the household.

By far the most common kind of child abduction is parental child abduction, which usually occurs when the parents separate or begin divorce proceedings. A parent may remove or retain the child from the other, seeking to gain an advantage in expected or pending child-custody proceedings, or because that parent fears losing the child in those child-custody proceedings; a parent may refuse to return a child at the end of an "access visit" or may flee with the child to prevent an access visit. Parental child abductions may be within the same city, within the state region or within the same country, or may be international. Studies performed for the U.S. Department of Justice's Office of Juvenile Justice and Delinquency Prevention reported that in 1999, 53 percent of family abducted children were gone less than one week, and 21 percent were gone one month or more.[3]

Depending on the laws of the state and country in which the parental abduction occurs, this may or may not constitute a criminal offense. For example, removal of a child from the UK for a period of 28 days or more without the permission of the other parent (or person with parental responsibility) is a criminal offense. Many U.S. states have criminalized interstate child abduction and the National Conference of Commissioners on Uniform State Laws (NCCUSL) has undertaken a project to draft a uniform state law dealing with parental abduction.[4]

Kidnapping can also take place in the case of deprogramming, a now rare practice to convince someone to give up his commitment to a new religious movement, called a cult or sect by critics, that the deprogrammer considers harmful.

Stockholm syndrome is a term used to describe the relationship a hostage can build with their kidnapper. It is a psychological response sometimes seen in an abducted hostage, in which the hostage shows signs of loyalty to the hostage-taker, regardless of the danger (or at least risk) in which the hostage has been placed. Stockholm syndrome is also sometimes discussed in reference to other situations with similar tensions, such as battered person syndrome, rape cases, child abuse cases, and bride kidnapping.

A famous case involved millionaire heiress Patty Hearst, granddaughter of William Randolph Hearst, who was kidnapped by the Symbionese Liberation Army. After two months in captivity, she actively took part in a robbery they were orchestrating. Her unsuccessful legal defense was that she suffered from Stockholm syndrome and was coerced into aiding the SLA. She was convicted and imprisoned for her actions in the robbery. Her seven-year prison term was eventually commuted by President Jimmy Carter, and Hearst was released from prison on February 1, 1979, having served only 22 months. She was granted a full pardon by President Bill Clinton on January 20, 2001.

Tiger kidnapping is taking an innocent hostage to make a loved one or associate of the victim do something. For example, a child may be taken hostage to force a shopkeeper to open the safe. The term originates from the usually long preceding observation, like a tiger does on the prowl for prey.

According to the 2003 Domestic Violence Report in Colorado, out of a survey of 189 tiger kidnapping incidents, most people (usually white females) were taken from their homes or residence by a present or former spouse or significant other. They were taken by force, but usually the victims were not injured when rescued or allowed to go free.[5]

Kidnapping around the world

Serious problems can arise when parental abduction results in moving a child, with a parent, across an international border. The laws of the countries are different, and a foreign child custody order may not be recognized. The Hague Convention on the Civil Aspects of International Child Abduction is an international treaty and legal mechanism to recover children abducted to another country by one parent or family member.

Kidnapping for ransom is almost nonexistent in the United States today, due in great part to the Federal Bureau of Investigation's aggressive stance toward kidnapping. The Bureau made kidnap for ransom a special priority, and continues to do so today. There are two main deterrents against kidnapping in the United States: the extreme logistical challenges involved in exchanging the money for the victim and harsh punishment. Convicted kidnappers can expect to face life imprisonment or the death penalty if convicted. In many states kidnapping is the only capital crime other than murder. One notorious failed example of kidnap for ransom was the Chowchilla bus kidnapping, in which 26 children in California were abducted with the intention of bringing in a $5 million ransom.[6]

In the past, and presently in some parts of the world, kidnapping is a common means used to obtain slaves. The Lord's Resistance Army, a rebel paramilitary group operating mainly in northern Uganda, is notorious for its abductions of children for use as child soldiers or sex slaves. According to the Sudan Tribune, as of 2005, more than 20,000 children have been kidnapped by the LRA.[7]

Bride kidnapping, although considered a sex crime by many, is still practiced in such places as Central Asia, the Caucasus region, parts of Africa, and Southeast Asia. The practice is prevalent in farming societies where daughters are valued for their potential labor output and therefore not encouraged to marry young because of the loss of output it represents to their families. Men, on the other hand, are afforded greater social status if they marry young, which creates a contentious atmosphere. The level of violence used in these kidnappings varies. Some are conducted with the permission of the bride seeking the opportunity to have a family but some are brutal and involve rape.