The Congo River is the largest river in western Central Africa and the most powerful on the continent. Its overall length of 2,900 miles (4,667 kilometers) makes it the second-longest in Africa (after the Nile). It is the fifth-longest river in the world, draining a basin of nearly 1.5 million square miles. The river also has the second-largest flow in the world, with a discharge of 1.5 million cubic feet of water per second, trailing only the Amazon, and the second-largest watershed of any river, again trailing the Amazon; its watershed is slightly larger than that of the Mississippi River.

The river and its tributaries flow through the second-largest rainforest in the world, the Congo Rainforest, second only to the Amazon Rainforest in South America. The dense rain forest, heavy rainfall, and poor soil of the basin that is traversed by the Congo results in sparse population, except for small settlements of hunters, farmers, and fishermen along or near the river. Since it is close to the equator, the climate is hot and humid.

Joseph Conrad termed the river and surrounding rainforest "the heart of darkness" after serving as a captain aboard a Congo steamer in the days of Leopold's reign. The area has long had the reputation as the mysterious land of pygmies, mythical beasts, dreadful plagues, and cannibals. A place of incredible beauty and power, it is also a place with a violent and sorrowful history.[1]

The Congo River is named after the ancient Kingdom of Kongo, which inhabited the lands at the mouth of the river at the time of European discovery. The Democratic Republic of Congo and Republic of Congo, both countries lying along the river's banks, are named after it. Between 1971 and 1997 the government of then-Zaire referred to it as the “Zaire River.”

Before continental drift opened the South Atlantic Ocean, the Congo was the upper part of a river roughly 7,500 miles (12,000 kilometers) long that flowed west across the parts of Gondwanaland that are now Africa and South America. Except for the beginning and end of its course, the river is uniformly elevated.[2]

Bantu-speaking people have lived along the Congo for at least two thousand years, supporting themselves with fish from the river and farms on the fertile lands between the river and forest. A powerful kingdom of the Kongo people, centered at the mouth of the river, emerged by the 1300s.

The Portuguese explorer Diogo Cão (Diogo Cam, currently) entered the Congo estuary on a voyage from 1482 to 1484 and claimed the area for his king. Those who tried to sail upriver encountered a narrow gorge that compressed the water into a powerful opposing current. In the river's final 220 miles from the edge of the central plateau to the coast, the Congo River drops more than a thousand feet and has 32 rapids. Difficult terrain made exploration on foot also treacherous. Following Cam, more than three hundred years elapsed before serious exploration of the Congo was undertaken.

Francisco José de Lacerda, a Portuguese explorer, reached the copper-rich Katanga region from the east in 1798, as did Arab traders in the first half of the 1800s. The Arabs extended their influence over the eastern Congo River Basin, engaging in the slave and ivory trades. In 1816 a British expedition went as far as Isangila. Scottish explorer and missionary David Livingstone visited the Luapula and Lualaba rivers in 1871, believing them to be sources of the Nile.[3]

Henry Morton Stanley was the first European to navigate the river's length and report that the Lualaba was not a source of the Nile, as had been suggested. He returned on behalf of King Leopold of Belgium in 1876 and claimed huge swaths of land in the Conger River basin for the king, an area more than 76 times the size of Belgium. By 1885 Leopold ruled this huge area as his personal domain through his private army, the Force Publique. His legacy is one of exploitation and human rights abuses such as slavery and mutilation of the peoples. He was eventually forced to cede this land to Belgium in 1908.

Several other European explorers traveled up the Congo's tributaries in the 1880s, mapping out ten thousand miles of navigable waterways that were linked together.

Though trade in goods was the initial impetus for the Europeans, they quickly discovered that the slave trade was much more lucrative, and the river was the means to deliver them to the coast from inland areas once the supply of slaves dwindled on the coast. As the wealth from the slave trade filtered inland, the demand for slaves grew, leading to raids by some groups and migrations by others to escape the slavers. But the increased trade and multiplication of towns along the river had the unforeseen benefit of lifestyles becoming more similar and new crops and technologies being shared.

The sources of the Congo River are in the highlands and mountains of the Great Rift Valley, as well as Lake Tanganyika and Lake Mweru, which feed the Lualaba River, becoming the Congo below Boyoma Falls. The Chambeshi River in Zambia is generally taken as the source of the Congo, in line with the accepted practice worldwide of using the longest tributary, as with the Nile River.

The Congo River begins peacefully in the savannas just south of Lake Tanganyika. It gradually widens and picks up speed until it enters a 75-mile long canyon of rapids often referred to as the "Gates of Hell." Emerging from there, it enters the tropical rainforest area known as the Lualaba (or Upper Congo). Its course through the rainforest causes it to cross the equator twice.

Because the watershed of the Congo drains from both the Northern and Southern Hemisphere, it does not have the great seasonal fluctuations in water level as other great rivers. Its flow is relatively stable because part of its watershed is always in the zone of rain. The Upper Congo abruptly ends with Stanley Falls, a 60-mile stretch of rapids.

Stanley Falls gives way to the Middle Congo, a thousand-mile stretch of navigable river, nine miles wide in some areas. Along this quiet stretch of river is the city of Kisangani in the Democratic Republic of Congo. Kisangani is located where the Lualaba River becomes the Congo River north of the Boyoma Falls, and was the site of the first settlement of Henry Morton Stanley. The Congo flows generally west from Kisangani just below the falls, then gradually bends southwest, passing by Mbandaka, joining with the Ubangi River, and running into the Malebo Pool (Stanley Pool), a fifty-mile lake. Here the river slows to a virtual stand-still for 20 miles. At this point it is 15 miles wide and is and flanked by the capital cities of Kinshasa and Brazzaville.

Kinshasa (formerly Léopoldville) and Brazzaville are on opposite sides of the river at the Pool, then the river narrows and falls through a number of cataracts in deep canyons (collectively known as the Livingstone Falls), running by Matadi and Boma, and into the sea at the small town of Muanda.

The river then flows into Livingstone Falls, a series of rapids and cataracts 220 miles long. There are some 32 cataracts, having as much power as all rivers and falls in the United States combined. The final one hundred miles to the Atlantic Ocean from the end of the falls is fully navigable.[1] 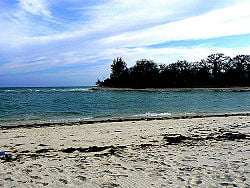 Due to its size and other key elements, the Congo River and its basin are crucial to the ecological balance of the entire African continent. The river's basin encompasses the world's second-largest contiguous rainforest, surpassed only by that of the Amazon. The region is biologically diverse and a huge watershed.

The northern and southern parts of the basin are characterized by open grasslands and scattered trees. Wildlife is abundant along the river, which itself harbors more than two hundred species of fish.

Although the Congo water discharge levels were unstable throughout the second half of the twentieth century, the hydrologic balance of the river has provided some relief from the drought that has afflicted the river basin.

In 1999, the World Commission on Water for the Twenty-First Century found that the Congo was one of the world's cleanest rivers, in part due to the lack of industrial development along its shores until that time.[2]

However, the situation is changing. Major threats to the large tropical rainforests and savannas are occurring due to increasing population and its demands. Uncontrolled hunting and fishing, illegal logging and the poaching of large mammals, deforestation, unplanned urban expansion and unrestrained extraction of oil and minerals are some of the major economic and environmental issues confronting the region.[4]

With railways now bypassing the three major falls (Matadi-Kinshasa; Kisangani-Ubundu; Kindu-Kongolo), the Congo River and its tributaries form a system of navigable waterways approximately nine thousand miles (14,480 kilometers) long, with much of the trade of central Africa passing along it, including copper, palm oil (as kernels), sugar, coffee, and cotton.

The Congo River is Africa's largest potential source of hydroelectric power; the most valuable site is along Livingstone Falls, where the first phase of the Inga Power Project has been completed. In spite of government initiatives, hydroelectric power is underdeveloped.[4]

In February 2005, South Africa's state-owned power company, Eskom, announced a proposal to increase the capacity of the Inga dramatically through improvements and the construction of a new hydroelectric dam. The project would bring the maximum output of the facility to 40 GW, twice that of China's Three Gorges Dam.[5] 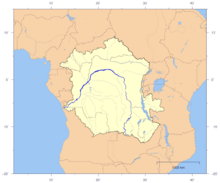 Course and Watershed of the Congo River with countries marked 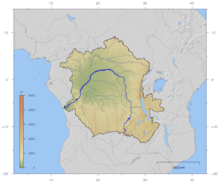 Course and watershed of the Congo River with topography shading

Sorted in order from the mouth heading upstream.