Congress and Treaty of Vienna 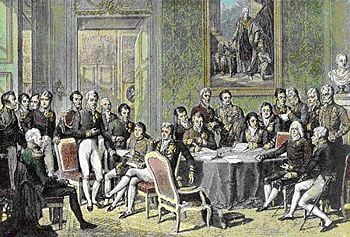 The Congress of Vienna by Jean-Baptiste Isabey, 1819.

The Congress of Vienna was a conference between ambassadors, from the major powers in Europe, that was chaired by the Austrian statesman Klemens von Metternich and held in Vienna, Austria, from November 1, 1814 to June 8, 1815. Its purpose was to settle issues and redraw the continent's political map after the defeat of Napoleonic France the previous spring, which would also reflect the change in status by the dissolution of the Holy Roman Empire eight years before. The discussions continued despite the ex-Emperor Napoleon I's return from exile and resumption of power in France in March 1815, and the Congress's Final Act was signed nine days before his final defeat at Waterloo on June 18, 1815. Technically, one might note that the "Congress of Vienna" never actually occurred, as the Congress never met in plenary session, with most of the discussions occurring in informal sessions among the Great Powers meeting without the greater number of delegates from the lesser states. The principle that each state has the same status and voice within international organs did not develop under the end of World War I.

The Congress was concerned with determining the entire shape of Europe after the Napoleonic wars, with the exception of the terms of peace with France between the belligerents, which had already been decided by the Treaty of Paris, signed a few months earlier, on May 30, 1814, returning the Bourbon monarchy and re-setting the borders to their 1792 locations. That outcome was widely unpopular with the population of France, and led indirectly to the resumption of power by Napoleon during the Hundred Days. The role of empire in the European space declined after the Congress. The nation state emerged as the basic political unit. These smaller units proved to be ideal for the evolution of a view of government as having a responsibility for the welfare of all citizens, not just of the governing elite. The nation state saw the emergence of democracy and of the view of the state as the collective property of all citizens, not as the personal possession of the ruling emperor.

At the Congress, Britain was represented first by its Foreign Secretary, Viscount Castlereagh; after Castlereagh's return to England in February 1815, by the Duke of Wellington; and in the last weeks, after Wellington left to face Napoleon in the Hundred Days, by the Earl of Clancarty.

Austria was represented by Prince Clemens von Metternich, the Foreign Minister, and by his deputy, Baron Wessenberg.

Prussia was represented by Prince Karl August von Hardenberg, the Chancellor, and the diplomat and scholar Wilhelm von Humboldt.

Although Russia's official delegation was led by the foreign minister, Count Nesselrode, Czar Alexander I, for the most part, acted on his own behalf.

Initially, the representatives of the four victorious powers hoped to exclude the French from serious participation in the negotiations, but Talleyrand managed to skilfully insert himself into "her inner councils" in the first weeks of negotiations. He allied himself to a Committee of Eight powers (Spain, France, Sweden, and Portugal) to control the negotiations. Talleyrand was able to use this to make himself a part of the inner negotiations. He then left his committee. 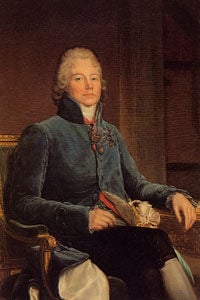 The major Allies' indecision on how to conduct their affairs without provoking a united protest from the lesser powers led to the calling of a preliminary conference on protocol, to which both Talleyrand and the Marquis of Labrador, Spain's representative, were invited on September 30, 1814.

Congress Secretary Friedrich von Gentz (1764-1832) would report that, "The intervention of Talleyrand and Labrador has hopelessly upset all our plans. Talleyrand protested against the procedure we have adopted and soundly [be]rated us for two hours. It was a scene I shall never forget."[1]

The embarrassed representatives of the Allies replied that the document concerning the protocol they had arranged actually meant nothing. "If it means so little, why did you sign it?" snapped Labrador.

Talleyrand’s policy, directed as much by national as personal ambitions, demanded the close but by no means amicable relationship he had with Labrador. Talleyrand regarded Labrador with "Olympian disdain;"[2] of Talleyrand, the testy Spaniard would remark: "That cripple, unfortunately, is going to Vienna."[3]

Talleyrand skirted additional articles suggested by Labrador: He had no intention of handing over the 12,000 afrancesados ("frenchified" Spanish fugitives who had sworn fealty to Joseph Bonaparte), with whom he had shady business connections, nor the bulk of the documents, paintings, pieces of fine art, and works of hydrography and natural history that had been looted from the archives, palaces, churches, and cathedrals of Spain.[4]

Most of the work at the Congress was performed by the five main powers (United Kingdom, Russia, Prussia, Austria, France).

On some issues, these powers cooperated with:

The Iroquois Confederacy participated in the congress, as it had been an ally of the British during the War of 1812, which was viewed by the British as part of the Napoleonic Wars.

Elements of the treaty

The most contentious subject at the Congress was the so-called Polish-Saxon Crisis. The Russians and Prussians proposed a deal in which much of the Prussian and Austrian shares of the partitions of Poland would go to Russia, which would create an independent Polish Kingdom in personal union with Russia with Alexander as king. In exchange, the Prussians would receive as compensation all of Saxony, whose King was considered to have forfeited his throne because he had not abandoned Napoleon soon enough. The Austrians, French, and British did not approve of this plan, and, at the inspiration of Talleyrand, signed a secret treaty on January 3, 1815, agreeing to go to war, if necessary, to prevent the Russo-Prussian plan from coming to fruition. 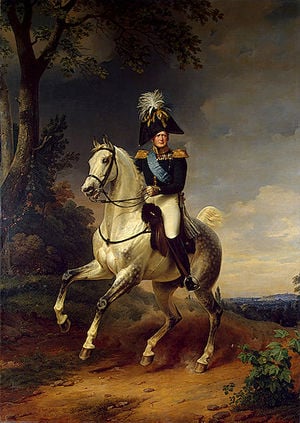 Although none of the three powers was particularly ready for war, the Russians did not call the bluff, and an amicable settlement was set on October 24, 1814, by which Russia received most of the Napoleonic Duchy of Warsaw as a "Kingdom of Poland" (called Congress Poland), but did not receive the district of Poznań (Grand Duchy of Poznań), which was given to Prussia, nor Kraków and became a free city. Prussia received 40 percent of Saxony (later known as the province of Saxony), with the remainder returned to King Frederick Augustus I (kingdoms of Saxony).

The Congress's principal results, apart from its confirmation of France's loss of the territories annexed in 1795-1810, which had already been settled by the Treaty of Paris, were the enlargement of Russia, (which gained most of the Duchy of Warsaw) and Prussia, which acquired Westphalia and the northern Rhineland. The consolidation of Germany from the nearly 300 states of the Holy Roman Empire (dissolved in 1806) into a much more manageable thirty-nine states was confirmed. These states were formed into a loose German Confederation under the leadership of Prussia and Austria.

Representatives at the Congress agreed to numerous other territorial changes. Norway was transferred from Denmark to Sweden, which sparked the nationalist movement leading to the establishment of the short-lived Kingdom of Norway on May 17, 1814. Austria gained Lombardy-Venetia in Northern Italy, while much of the rest of North-Central Italy went to Habsburg dynasties (The Grand Duchy of Tuscany, the Duchy of Modena, and the Duchy of Parma). The Pope was restored to the Papal States. The Kingdom of Piedmont-Sardinia was restored to its mainland possessions, and also gained control of the Republic of Genoa. In Southern Italy, Napoleon's brother-in-law, Joachim Murat, was originally allowed to retain his Kingdom of Naples, but following his support of Napoleon in the Hundred Days, he was deposed, and the Bourbon Ferdinand IV was restored to the throne.

A large United Kingdom of the Netherlands was created for the Prince of Orange, including both the old United Provinces and the formerly Austrian-ruled territories in the Southern Netherlands. There were other, less important territorial adjustments, including significant territorial gains for the German Kingdoms of Hanover (which gained East Frisia from Prussia and various other territories in Northwest Germany) and Bavaria (which gained the Rhenish Palatinate and territories in Franconia). The Duchy of Lauenburg was transferred from Hanover to Denmark, and Swedish Pomerania was annexed by Prussia. Switzerland was enlarged, and Swiss neutrality was guaranteed.

The treaty did not recognize Portuguese rights over Olivenza, but instead in the treaty there was only a formal declaration stating that both Spain and Portugal should negotiate over the town's sovereignty in order to preserve "total and permanent harmony" between both countries. However, Spain has never desired to start these negotiations. The United Kingdom of Great Britain and Ireland received parts of the West Indies at the expense of the Netherlands and Spain and kept the former Dutch colonies of Ceylon and the Cape Colony, and also kept Malta and Heligoland. Under the Treaty of Paris, Britain obtained the protectorate over the United States of the Ionian Islands and the Seychelles.

The Congress of Vienna was frequently criticized by nineteenth century and more recent historians for ignoring national and liberal impulses, and for imposing a stifling reaction on the continent. The Congress of Vienna was an integral part in what became known as the Conservative Order, in which peace and stability were traded for the liberties and civil rights associated with the American and French Revolutions.

In the twentieth century, however, many historians have come to admire the statesmen at the Congress, whose work had prevented another European general war for nearly a hundred years (1815-1914). Among these is Henry Kissinger, whose doctoral dissertation was on the Congress of Vienna. Prior to the opening of the Paris peace conference of 1918, the British Foreign Office commissioned a history of the Congress of Vienna to serve as an example to its own delegates of how to achieve an equally successful peace. Besides, the decisions of the Congress were made by the Five Great Powers (Austria, France, Prussia, Russia, and the United Kingdom), and not all the countries of Europe could extend their rights at the Congress. For example, Italy became a mere "geographical expression" as divided into eight parts (Parma, Modena, Tuscany, Lombardy, Venetia, Piedmont-Sardinina, the Papal States, Naples-Sicily) under the control of different powers, while Poland was under the influence of Russia after the Congress. The arrangements that made the Five Great Powers finally led to future disputes. The Congress of Vienna preserved the balance of power in Europe, but it could not check the spread of revolutionary movements on the continent.

Retrieved from https://www.newworldencyclopedia.org/p/index.php?title=Congress_and_Treaty_of_Vienna&oldid=1003799
Categories:
Hidden category:
This page was last edited on 20 March 2017, at 16:03.
Content is available under Creative Commons Attribution/Share-Alike License; additional terms may apply. See Terms of Use for details.