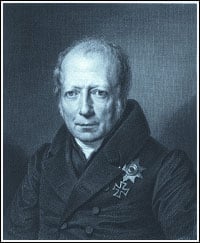 Friedrich Wilhelm Christian Karl Ferdinand, or Baron von Humboldt (June 22, 1767 – April 8, 1835), was a government official, diplomat, philosopher, linguist, and educational reformer, famous for introducing knowledge of the Basque language to European intelligentsia. His younger brother, Alexander von Humboldt was an equally famous naturalist and scientist. Wilhelm von Humboldt was influential in developing the science of comparative philology, and his work has continued to inform the field of linguistics. His view that language expresses the culture of the speaker and is a determinant in our perception of the world was developed much later into the field of ethnolinguistics. He was the founder of Humboldt Universität in Berlin, and made significant contributions to the educational system in Prussia and, through its influence, to the world.

Friedrich Wilhelm Christian Karl Ferdinand von Humboldt was born on June 22, 1767 in Potsdam, Prussia (today’s Germany), into the family of Alexander Georg von Humboldt and Baroness von Holwede. As a child, he was tutored by Johann Heinrich Campe, who later became one of the famous members of the German philanthropic school. In 1779 his father died, an event that left young Wilhelm traumatized. The education of his brothers was taken on by Christian Kunth, a famous German educator. He also guided von Humboldt through his law studies at the University of Brandenburg in Frankfurt-an-der-Oder, and later at the University of Göttingen.

In 1789, von Humboldt became a law clerk to the Supreme Court in Berlin. He married Karoline von Dacheröden, the daughter of the President of the Prussian Council in Erfurt. In 1793 he published his essay Über das Studium des Klassischen Altertums, in which he summarized his program for educational reforms, which were in progress in many European countries after the French Revolution.

Von Humboldt resigned from his position at the Supreme Court after only one year, and resided mostly at his in-laws' in Thuringia and in Jena. While in Jena, from 1794 to 1797, he was a member of Friedrich von Schiller's circle.

After the death of his mother in 1796, he was left with a larger inheritance, enabling him to live a comfortable life. He undertook several journeys around Europe for the purposes of educational research, and became particularly interested in philology. He produced several scientific works in this period of his life.

In 1802, he was appointed Prussian envoy to the Vatican in Rome—a duty he carried out for six years. In 1807, he was called by Baron von Stein to return to Berlin and take over reforms of the educational system. In 1809, von Humboldt became head of the Educational Department in the Prussian Ministry of the Interior. He became particularly interested in the work of Johann Pestalozzi, and sent his teachers to Switzerland to study Pestalozzi’s method. In 1809, he founded the University of Berlin.

From 1810 to 1819 von Humboldt served as the Prussian representative in Vienna, London, and Berlin. In 1819, he was appointed Minister of Estates in the Prussian government, but he resigned from that position in protest against the reactionary policies of the government. He retired to his estate in Tegel near Berlin, and concentrated on writing and research. In 1829, he served as Chairman of the Commission on the Foundation and Interior Design of the newly founded Berlin Museum.

Wilhelm von Humboldt was well-known as a philosopher, a diplomat, a linguist, and an educational theorist.

Wilhelm von Humboldt's book On the Limits of State Action in 1810, was the boldest defense of the liberties of the Enlightenment. It anticipated John Stuart Mill's essay On Liberty by which von Humboldt's ideas became known in the English-speaking world. He described the development of liberalism and the role of liberty in individual development and in pursuit of excellence. He also described the necessary conditions without which the state must not be allowed to limit the action of individuals. He believed, as in biological development, that all growth is good and a part of the natural process. Government thus should not interfere too much in the development of any organization within the state, for it may retard the normal development of that organization.

He advocated a type of liberalism that would preserve the individual states and provinces, with their unique character and traditions. He believed that those small units need to have their own government and constitution, adapted to the particular genius of its national character.

In his The Limits of State Action (1791), von Humboldt presented his concept of the human being. He saw people as both individuals and as part of a society. He believed that human nature needs freedom for self-expression, but also social support and life in a community:

If we would indicate an idea which, throughout the whole course of history, has ever more and more widely extended its empire, or which, more than any other, testifies to the much-contested and still more decidedly misunderstood perfectibility of the whole human race, it is that of establishing our common humanity — of striving to remove the barriers which prejudice and limited views of every kind have erected among men, and to treat all mankind, without reference to religion, nation, or color, as one fraternity, one great community, fitted for the attainment of one object, the unrestrained development of the physical powers. This is the ultimate and highest aim of society. (cited in Alexander von Humboldt 1848).

As a successful diplomat between 1802 and 1819, von Humboldt was plenipotentiary Prussian minister in Rome from 1802, ambassador in Vienna from 1812 during the closing struggles of the Napoleonic Wars, at the congress of Prague (1813) where he was instrumental in drawing Austria to ally with Prussia and Russia against France, a signer of the peace treaty in Paris and the treaty between Prussia and defeated Saxony (1815), at Frankfurt settling post-Napoleonic Germany, and at the congress at Aachen in 1818. However, the increasingly reactionary policy of the Prussian government made him give up political life in 1819. He was particularly critical of the government’s harsh persecution of ‘demagogues’ following the attack on Kotzebue.

Wilhelm von Humboldt was an adept linguist who translated Pindar and Aeschylus and studied the Basque language. He saw human language as a rule-governed system, not merely a collection of words and phrases paired with meanings.

His work as a philologist in the Basque language has had the most extended life of all his work. The result of his visit to the Basque country was Researches into the Early Inhabitants of Spain by the help of the Basque language (1821). In this work he endeavored to show, by an examination of geographical place-names, that a race or races speaking dialects allied to modern Basque once extended throughout Spain, southern France, and the Balearic Islands. He identified these people with the Iberians of classical writers, and he further surmised that they had been allied with the Berber people of north Africa. Wilhelm von Humboldt's pioneering work has been superseded in its details by modern linguists and archaeological findings.

His study of the ancient Kawi language of Java, incomplete but edited and published posthumously by his brother in 1836, in English On the Diversity of Human Language Construction and its Influence on the Mental Development of the Human Species, remains a classic explication of the philosophy of speech. 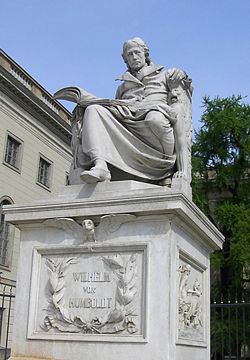 Wilhelm von Humboldt traveled around the world to find the laws that govern human development on earth. He wanted to find the purpose of life, in order to design the system of education that would support that purpose. He found knowledge to be of utmost importance in human life, and thus argued that individuals need to be free from any restraint in their search for knowledge. State government and even parental authority are seen as potential threats to human development, as their authority might retard normal human growth. He advocated for children’s rights and the maximal freedom of individuals within the state. However, von Humboldt did not believe that individualism is the goal of human development. He rather believed that educated individuals were essential for the development of the world, and thus should actively engage in solving world problems.

Wilhelm von Humboldt was a great admirer of Johann Pestalozzi and his method of education. As a minister in the Department of Education, he sent numerous teachers to Switzerland to study with Pestalozzi and apply his teachings to Prussian schools. He saw humans going through three “natural” stages of development, and thus advocated education also be divided into three stages—elementary, secondary, and university education. He argued that according to this model schools also need to be divided into elementary schools, secondary schools, and universities.

He regarded elementary education as the most important in one’s life, for it sets the foundation for all later levels of education. He believed that everybody, regardless of their social status or career goals, needed to undertake the same elementary training. Such education needs to include a complete mental training—the training of personality. He proposed that the state should provide funds for those who cannot pay for education.

Wilhelm von Humboldt’s ideas of universal elementary education and the division of schools into the three levels—elementary school, secondary school, and universities—did not gain acceptance until well into the twentieth century. His model of the university is characterized by the unity of teaching and research, which became embodied in his Berlin University. As Prussian minister of education, von Humboldt oversaw the system of Technische Hochschulen (Technical high schools) and gymnasiums, that made Prussia, and subsequently the German Empire, the strongest European power and the scientific and intellectual leader of the world.

Wilhelm von Humboldt is credited with being the first European linguist to identify human language as a rule-governed system, rather than just a collection of words and phrases paired with meanings. This idea is one of the foundations of Noam Chomsky's transformational theory of language. Chomsky has frequently quoted von Humboldt's description of language as a system which "makes infinite use of finite means," meaning that an infinite number of sentences can be created using a finite number of grammatical rules. Von Humboldt has also been recognized as an originator of the linguistic relativity hypothesis (more commonly known as the Sapir-Whorf hypothesis), approximately a century before either Edward Sapir or Benjamin Whorf.