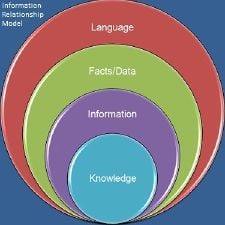 English: Visual representation of the relationship between language, data/facts, information, and knowledge.

Knowledge is evaluated and organized information with implications of being true, justified, and believed. Knowledge is often distinguished from opinion. Opinion implies one's perspective without a claim for general or universal validity. The term knowledge is also used to mean the confident understanding of a subject, potentially with the ability to use it for a specific purpose.

We suppose ourselves to possess unqualified scientific knowledge of a thing, as opposed to knowing it in the accidental way in which the sophist knows, when we think that we know the cause on which the fact depends, as the cause of that fact and of no other, and, further, that the fact could not be other than it is. Now that scientific knowing is something of this sort is evident — witness both those who falsely claim it and those who actually possess it, since the former merely imagine themselves to be, while the latter are also actually, in the condition described. Consequently the proper object of unqualified scientific knowledge is something which cannot be other than it is.—Aristotle, Posterior Analytics (Book 1 Part 2)

The definition of knowledge is a matter of on-going debate among philosophers in the field of epistemology. The classical definition, but not ultimately endorsed, is described by Plato,[1] in which he claimed that in order for there to be knowledge at least three criteria must be fulfilled; a statement must be justified, true, and believed. Some claim that these conditions are not sufficient, as Gettier case examples allegedly demonstrate. There are a number of alternatives proposed, including Robert Nozick's arguments for a requirement that knowledge 'tracks the truth' and Simon Blackburn's additional requirement that we do not want to say that those who meet any of these conditions 'through a defect, flaw, or failure' have knowledge. Richard Kirkham suggests that our definition of knowledge requires that the believer's evidence is such that it logically necessitates the truth of the belief.

In contrast to this approach, Wittgenstein observed, following Moore's paradox, that one can say "He believes it, but it isn't so," but not "He knows it, but it isn't so." [2] He goes on to argue that these do not correspond to distinct mental states, but rather to distinct ways of talking about conviction. What is different here is not the mental state of the speaker, but rather the activity in which they are engaged. For example, on this account, to know that the kettle is boiling is not to be in a particular state of mind, but to perform a particular task with the statement that the kettle is boiling. Wittgenstein sought to bypass the difficulty of definition by looking to the way "knowledge" is used in natural languages. He saw knowledge as a case of a "family resemblance."

Wittgenstein presented the idea of "family resenblance" in Philosophical Investigations using the example of a game. The term "game" is used in multiple ways but there is no single defining characteristics common to all games. Just like members of the same family resemble each other, all games are more or less similar. Likewise, knowledge can be defined by virtue of similarity of the usage of the term in diverse contexts.

In An Introduction to Logic and Scientific Method (1934), Morris R. Cohen and Ernest Nagel reviewed the pursuit of truth as determined by logical considerations. They reviewed ways of eliminating doubt and arriving at stable beliefs or reliable knowledge, such as:

Their final declaration was, "The Scientific Method is the most assured technique that man has yet devised for controlling the flux of things and establishing stable beliefs."

In an essay entitled "Inductive Method and Scientific Discovery," Marcello Pera said, "In the first place, the scientific method is a procedure, a general strategy that indicates an ordered sequence of moves (or steps) which the scientist has to make (or go through) in order to reach the goal of his research." In On Scientific Discovery (edited by Grmek, Cohen, and Cimino 1977) the scientific method is not a method directly applied, but rather a guide to the mental activity stages of originating, refining, extending, and applying knowledge. It is subject neutral and flexible in use, thus suitable for all domains.

Statements about truth must be viewed skeptically. Rather than state something as "true," the following phrase should be used: "On the evidence available today the balance of probability favors the view that..." (V. Gordon Childe, Man Makes Himself, 1936).

There have been numerous writings that contain hundreds of formulas for the scientific method. They are virtually the same, but differ in length and terminology. In the article, "Suggestions for Teaching the Scientific Method" published in a 1961 issue of American Biology Teacher, Dr. Kenneth B.M. Crooks suggested this scientific method formula:

Some traditions such as Zen Buddhism point out the limit of describing religious knowledge by using language or conceptual vocabularies. They use paradoxical, logically incompatible, or unintelligible phrases to lead practitioners beyond a conceptual understanding, and to instead have an intuitive grasp of religious truth. Therefore, Zen masters often try to describe the spiritual experience of Enlightenment by using analogies and by stressing the necessity of its practice.

The sociology of knowledge is the study of the relationship between human thought and the social context within which it arises and of the effects prevailing ideas have on societies (compare history of ideas).

The term first came into widespread use in the 1920s, when a number of German-speaking sociologists, notably Max Scheler and Karl Mannheim, wrote Ideology and Utopia. With the dominance of functionalism through the middle years of the 20th century, the sociology of knowledge tended to remain on the periphery of mainstream sociological thought. It was largely reinvented and applied much more closely to everyday life in the 1960s, particularly by Peter L. Berger and Thomas Luckmann in The Social Construction of Reality (1966), which was central for methods dealing with qualitative understanding of human society (compare socially constructed reality).

Although very influential within modern sociology, the sociology of knowledge can claim its most significant impact on science more generally through its contribution to debating and understanding the nature of science itself, most notably through the work of Thomas Kuhn in The Structure of Scientific Revolutions (see also: paradigm).

Knowledge Management ('KM') comprises of a range of practices used by organizations to identify, create, represent, and distribute knowledge. It has been an established discipline since 1995 with a body of university courses and both professional and academic journals dedicated to it. Most large companies have resources dedicated to Knowledge Management, often as a part of 'Information Technology' or 'Human Resource Management' departments, and sometimes reporting directly to the head of the organization. As effectively managing information is a must in any business, and knowledge and information are intertwined, Knowledge Management is a multi-billion dollar world wide industry.

Knowledge Management programs are typically tied to organizational objectives and are intended to achieve specific outcomes, these can include improved performance, competitive advantage innovation, lessons learned transfer (for example between projects) and the general development of collaborative practices.

One aspect of Knowledge Management is that knowledge transfer has always existed in one form or another. Examples include on-the-job peer discussions, formal apprenticeship, discussion forums, corporate libraries, professional training, and mentoring programs. However, with computers becoming more widespread in the second half of the twentieth century, specific adaptations of technology such as knowledge bases, expert systems, and knowledge repositories have been introduced to further simplify the process.

The emergence of Knowledge Management has also generated new roles and responsibilities in organizations. An early example is the Chief Knowledge Officer job position, however in recent years, Personal knowledge management (PKM) practice has arisen in which individuals apply KM practice to themselves, their roles, and their career development.

Knowledge Management has also been linked to "knowledge manipulation" which is that the creation, dissemination, and use of knowledge is instrumental (Land, Nolas, Amjad). Hence actual knowledge management may constitute a kind of malpractice in which what asserts to be knowledge is created to achieve an effect, such as the false accounts presented by ENRON.