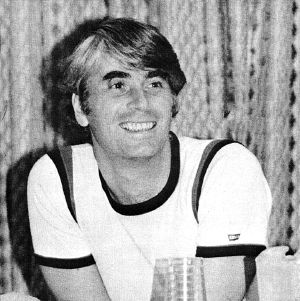 Robert Nozick (November 16, 1938 – January 23, 2002) was an American philosopher and, from 1998 to his death in 2002, Joseph Pellegrino University Professor at Harvard University. Nozick was schooled at Columbia University, Oxford University in England, and Princeton University. He was a prominent political philosopher in the 1970s and 1980s. He did additional but less influential work in such subjects as decision theory and epistemology. His highly influential book, Anarchy, State, and Utopia (1974) was a libertarian answer to his Harvard colleague John Rawls' socialist-oriented defense of a form of social-democratic liberalism and welfare state, A Theory of Justice, published in 1971.

Nozick was born in Brooklyn, the son of a Jewish entrepreneur from Russia. He was married in 1959, to Barbara Fierer (one son, one daughter; marriage dissolved 1981), and in 1987, to the the American poet Gjertrud Schnackenberg. Nozick died in Cambridge, Massachusetts, on January 23, 2002, after a prolonged struggle with stomach cancer. His remains are interred at Mount Auburn Cemetery in Cambridge, Massachusetts.

Nozick was a prodigious thinker who gained a reputation for brilliance within his chosen field while still in graduate school at Princeton in the early 1960's. He wrote his dissertation on decision theory under the supervision of Carl Hempel. Along with many young intellectuals of that period, he was drawn initially to the politics and socialism of the New Left. But study of the works of the defenders of capitalism and personal liberty, such as F.A. Hayek, Ludwig von Mises, Murray Rothbard, and Ayn Rand, led him to renounce leftist politics and to become concerned philosophically with political theory instead of the technical issues of analytic philosophy. This resulted in his first and most famous book, Anarchy, State, and Utopia (1974).

Nozick's book, along with Rawls' A Theory of Justice, revived interest in and study of political philosophy within the American analytic philosophical tradition; political philosophy had been mostly neglected within analytic philosophy from the founding of the Vienna Circle until then. Those two books generated a very large philosophical response and discussion, so that political philosophy became a central concern of American philosophy in the 1970s and 1980s, and possibly later. Rawls continued work in political theory until his death, but Nozick turned away from political theory and went on to other concerns, so the written response to and discussion of Anarchy, State, and Utopia is very much smaller than that for A Theory of Justice. It seems now, however, that Nozick will be remembered and known for that work much more than for his subsequent work and interests.

In Philosophical Explanations (1981), which received the Phi Beta Kappa Society's Ralph Waldo Emerson Award, Nozick provided novel accounts of knowledge, free will, personal identity, the nature of value, and the meaning of life. He also put forward an epistemological system that attempted to deal with both Edmund Gettier-style problems and those posed by skepticism. This highly influential argument eschewed justification as a necessary requirement for knowledge.

The Examined Life (1989), pitched to a broader public, explores love, death, faith, reality, and the meaning of life. The Nature of Rationality (1993) presents a theory of practical reason that attempts to embellish notoriously spartan classical decision theory. Socratic Puzzles (1997) is a collection of papers that range in topic from Ayn Rand and Austrian economics to animal rights, while his last book, Invariances, published in 2001, just shortly before his death, applies insights from physics and biology to questions of objectivity in such areas as the nature of necessity and moral value.

Nozick was notable for his curious, exploratory style and methodological ecumenism. Often content to raise tantalizing philosophical possibilities and then leave judgment to the reader, Nozick was also notable for inventively drawing from literature outside of philosophy (e.g., economics, physics, evolutionary biology) to infuse his work with freshness and relevance.

As his obituary in The Independent put it:

In his most important book, Anarchy, State, and Utopia—it won the National Book Award in 1975, the year after its publication—Nozick gave an ethical defense of libertarianism, the minimal state, and private property, and an ethical critique (i.e. he held, implicitly if not explicitly, that they are unethical) of socialism, welfarism, and social-welfare liberalism and the state or government that results from adopting and implementing its theories.

Nozick began with a notion of individual rights. In his first sentence he declared, “Individuals have rights, and there are things no person or group may do to them (without violating their rights).”[2] Sometimes he referred to these as “Lockean rights,” after the British philosopher John Locke, who had detailed an account of the inherent rights of persons. Nozick went on to say that the existence of these rights raises “the question of what, if anything, the state and its officials may do.” He went on, “How much room do individual rights leave for the state?” The central concern of his book was the proper or ethically justifiable nature of the state, and its ethically legitimate functions and justifications. He summarized his results this way:

Our main conclusions about the state are that a minimal state, limited to the narrow functions of protection against force, theft, fraud, enforcement of contracts, and so on, is justified; that any more extensive state will violate persons’ rights not to be forced to do certain things, and is unjustified; and that the minimal state is inspiring as well as right. Two noteworthy implications are that the state may not use its coercive apparatus for the purpose of getting some citizens to aid others, or in order to prohibit activities to people for their own good or protection.[3]

It is important to note that Nozick was not an anarchist; he did support the existence of a state and the giving of coercive power to that state, for limited purposes. His notion of the state is sometimes called the "night watchman theory" of the state, on the model of a night watchman who protects property from break in, theft, and other harms.

Part I of Nozick’s book justifies such a minimalist state, and Part II argues that no more extensive state can be justified. The most important, or at least best known, section of Part II is Nozick's discussion of the issue of distributive justice. He adopts and defends what he calls "the entitlement theory," which he summarized in a three-point definition:

The crucial point here is the third one: It prohibits any form of socialism or welfarism whereby the state or any other agency with power uses that power to force anyone to give up any holding to benefit someone else. Of course, point two, the principle of justice in transfer, does not prohibit one person voluntarily giving something to another. But that is the central point; Nozick's ethical stance prohibits the use of state or other power for the involuntary coercion of anyone to give anything from one person to another.

So, according to Nozick, a distribution of goods is just, so long as the distribution was brought about by free exchanges by consenting adults and was made from a just starting position, even if large inequalities emerge from the process. In fact, Nozick explicitly announced that, starting from any initial position that anyone thinks is just, application of his view would result in inequality because some people's product or service would inevitably be in greater demand than that of others, so other people would voluntarily pay them more or buy more of their product or service, and they would thus acquire greater holdings (become richer) than other people. In an apt turn of phrase, Nozick declared that the only way that inequalities can be prevented is for the socialist state to "forbid capitalist acts between consenting adults."

Nozick appealed to the Kantian idea that people should be treated as ends (what he termed "separateness of persons"), not merely as a means. For example, forced redistribution of income treated people as if they were merely sources of money.

Nozick here challenges John Rawls's arguments in A Theory of Justice that conclude that just inequalities in distribution must benefit the least well off.

Nozick himself partly recanted the libertarian views he had earlier expressed in Anarchy, State, and Utopia in one of his later books, The Examined Life, calling those views "seriously inadequate." In a 2001 interview, however, he clarified his position: "What I was really saying in The Examined Life was that I was no longer as hardcore a libertarian as I had been before. But the rumors of my deviation (or apostasy!) from libertarianism were much exaggerated."[5]

Retrieved from https://www.newworldencyclopedia.org/p/index.php?title=Robert_Nozick&oldid=1091584
Categories:
Hidden category:
This page was last edited on 16 December 2022, at 01:45.
Content is available under Creative Commons Attribution/Share-Alike License; additional terms may apply. See Terms of Use for details.