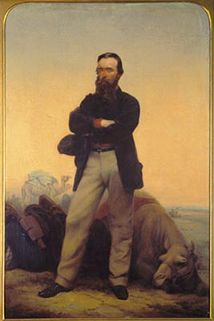 Robert O'Hara Burke (1821 - June 28, 1861) was an Irish soldier and police officer, who achieved fame as an Australian explorer. He was the leader of the ill-fated Burke and Wills expedition, which was the first expedition to cross Australia from south to north, finding a route across the continent from the settled areas of Victoria to the Gulf of Carpentaria. At that time, most of the inland of Australia had not been explored by Europeans and was completely unknown to the settlers. The expedition party was well-equipped, but Burke was not experienced in bushcraft and his leadership is often blamed for the failure of the project and the deaths of seven people in the party. Burke and his partner, William John Wills, died of starvation under tragic circumstances on the banks of Coopers Creek.

Burke was born in St. Clerah's, County Galway, Ireland, in 1821, the third son of James Hardiman Burke, an officer in the British army 7th Royal Fusiliers, and Anne Louisa Burke. Burke, his father, and all his brothers were soldiers. His brother, James Thomas, was a Lieutenant in the Royal Engineers, and on July 7, 1854, at the battle of Giurgevo became the first British officer killed in the Crimean War.

Robert entered the Woolwich Military Academy in 1835, and then went on to further his education in Belgium. In 1840, at the age of twenty, he entered the Austrian army and in 1842, was promoted to Second Lieutenant in the Prince Regent's 7th Hussar Regiment. He spent most of his time in the Imperial Austrian Army posted to northern Italy, and in 1847 was promoted to 1st Lieutenant. In 1848, he suffered health problems and resigned from the Austrian army after charges against him relating to debts and absence without leave were dropped.

After returning to Ireland, in 1848, he joined the Royal Irish Constabulary. He did his cadet training at Phoenix Park Depot in Dublin, before being promoted to 3rd Class Sub-Inspector, stationed first in County Kildare and later in Dublin.

Burke emigrated to Australia in 1853. Upon arrival in Melbourne, he joined the Victorian police force and was initially posted to Carlsruhe as an inspector, but was soon promoted to Senior Inspector and moved to Beechworth. He returned to England to fight in the Crimean War, but peace was signed and the war ended before Burke got a chance to enlist, and he returned to Victoria in December 1856.

He returned to his posting at Beechworth, and from there attended the "Buckland Valley" riots, near Bright, against the Chinese gold miners in 1857. In November 1858, he was transferred to Castlemaine as Police Superintendent. 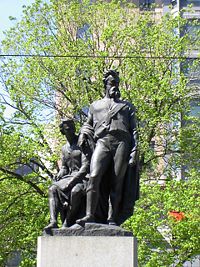 Burke and Wills Statue on the corner of Collins and Swanston Street, Melbourne

After the South Australian explorer, John McDouall Stuart, had reached the center of Australia, the South Australian parliament offered a reward of £2,000 for the promotion of an expedition to cross the continent from south to north, generally following Stuart's route. In May 1860, Burke was appointed to lead the Victorian Exploring Expedition with William John Wills as surveyor and astronomical observer.

The expedition left Melbourne on August 20, 1860, with a total of 19 men, 27 camels, and 23 horses. They reached Menindee on September 23, 1860, where several people resigned, including the second-in-command, George James Landells and the medical officer, Dr. Hermann Beckler

Coopers Creek, 400 miles further on, was reached on November 11, 1860, by the advanced group, the remainder intendeding to catch up. After a break, Burke decided to make a dash to the Gulf of Carpentaria, leaving on December 16, 1860. William Brahe was left in charge of the remaining party. The small team of Burke, William Wills, John King, and Charley Gray reached the mangroves on the estuary of the Flinders River, near where the town of Normanton now stands, on February 9, 1861. Flooding rains and swamps meant they never saw open ocean.

Already weakened by starvation and exposure, progress on the return journey was slow and hampered by the tropical monsoon downpours of the wet season. Gray died four days before they reached the rendezvous at Cooper Creek. The other three rested for a day where they buried him. They eventually reached the rendezvous point on April 21, 1861, nine hours after the rest of the party had given up waiting and left, leaving a note and some food, as they had not been relieved by the party supposed to be returning from Menindie.

They attempted to reach Mount Hopeless, the furthest outpost of pastoral settlement in South Australia, which was closer than Menindie, but failed and returned to Cooper Creek. While waiting for rescue Wills died of exhaustion and starvation. Soon after, Burke also died, at a place now called Burke's Waterhole on Coopers Creek in South Australia. The exact date of Burke's death is uncertain, but has generally been accepted to be June 28, 1861.

King survived with the help of Aborigines until he was rescued in September by Alfred William Howitt. Howitt buried Burke and Wills before returning to Melbourne. In 1862, Howitt returned to Coopers Creek and disinterred Burke and Wills' bodies, taking them first to Adelaide and then by steamer to Melbourne where they were laid in state for two weeks. On January 23, 1863, Burke and Wills received a State Funeral and were buried in Melbourne General Cemetery. Ironically, on that day, Stuart and his Companions, having successfully completed the south-north crossing, were received back at a large ceremony in Adelaide.

The tragic Burke and Wills expedition was not a waste of time. It had completed the picture of inland Australia, and proved that there was no inland sea. More importantly, each of the rescue parties sent from different parts of the continent added in some way to the understanding of the land it crossed.

In 1862, a memorial was erected overlooking the town of Castlemaine, where Burke had been stationed before leading the expedition. The Victorian towns of Bendigo, Ballarat and Fryerstown also erected monuments. In 1890, a monument was erected at Royal Park, the expedition's departure point in Melbourne. The plaque on the monument states:

"This memorial has been erected to mark the spot from whence the Burke and Wills Expedition started on the 20th August 1860. After successfully accomplishing their mission the two brave leaders perished on their return journey at Coopers Creek in June 1861."

Retrieved from https://www.newworldencyclopedia.org/p/index.php?title=Robert_O%27Hara_Burke&oldid=1091585
Categories:
Hidden category:
This page was last edited on 16 December 2022, at 01:46.
Content is available under Creative Commons Attribution/Share-Alike License; additional terms may apply. See Terms of Use for details.