In the religious sense, enlightenment is most closely associated with South and East Asian religious experiences, being used to translate words such as Bodhi or satori in Buddhism, or moksha in Hinduism and other Indian religious traditions. The concept does also have parallels in the Abrahamic religions, that is, in the Kabbalah tradition in Judaism, in Christian mysticism, and in the Sufi tradition of Islam.

In its secular use, the concept refers mainly to the European intellectual movement known as the Age of Enlightenment, also called the Age of Reason, referring to philosophical developments related to scientific rationality in the seventeenth and eighteenth centuries.

Bodhi (बोधि) is the Pāli and Sanskrit word for the "awakened" or "knowing" consciousness of a fully liberated yogi, generally translated into English as "enlightenment." It is an abstract noun formed from the verbal root budh (to awake, become aware, notice, know or understand), corresponding to the verbs bujjhati (Pāli) and bodhati or budhyate (Sanskrit). The term Bodhi is mostly used in Buddhist context.

In early Buddhism, Bodhi carries a meaning synonymous to Nirvana, using only some different metaphors to describe the experience, which implied the extinction of raga (greed), dosa (hate), and moha (delusion). In the later school of Mahayana Buddhism, the status of Nirvana was downgraded, coming to refer only to the extinction of greed and hate, implying that delusion was still present in one who attained Nirvana, and that one needed to attain Bodhi to eradicate delusion.[2] The result is that according to Mahayana Buddhism, the Arahant attains only Nirvana, thus still being subject to delusion, while the Bodhisattva attains Bodhi. In Theravada Buddhism, Bodhi and Nirvana carry the same meaning, that of being freed from craving, hate and delusion.

Satori (悟 Korean oh; Japanese satori; Chinese Wù) is a Japanese Buddhist term for enlightenment. The word literally means "understanding." It is sometimes loosely used interchangeably with Kensho, but Kensho refers to the first perception of the Buddha-Nature or True-Nature, sometimes referred to as "awakening." Kensho is not a permanent state of enlightenment, but rather a clear glimpse of the true nature of creation. Satori, on the other hand, refers to "deep" or lasting enlightenment. According to D.T. Suzuki, "Satori is the raison d'être of Zen, without which Zen is not Zen. Therefore every contrivance, disciplinary and doctrinal, is directed towards satori."[3] Satori can be found in every moment of life; it lies hidden in all daily activities that are to be unwraped to reveal "satori."

As an analogy, one may think of a baby when it first walks. After much effort, it stands upright, finds its balance, and walks a few steps (kensho), then falls. After continued effort the child will one day find that it is able to walk all the time (satori).

Once the True-Nature has been seen, it is customary to use satori when referring to the enlightenment of the Buddha and the Patriarchs, as their enlightenment was permanent.

The Zen Buddhist experience commonly recognizes enlightenment as a transitory thing in life, almost synonymous with the English term epiphany, and satori is the realization of a state of epiphanic enlightenment. Because all things are transitory according to Zen philosophy, however, the transitory nature of satori is not regarded as limiting in the way that a transitory epiphany would be in Western understandings of enlightenment.

D.T. Suzuki writes that "Samadhi alone is not enough, you must come out of that state, be awakened from it, and that awakening is Prajna. That movement of coming out of samadhi, and seeing it for what it is, that is satori."[4]

Moksha (Hinduism and some other Indian religious traditions)

In Indian religions (Hinduism, Jainism, Buddhism, and Sikhism), Moksha (Sanskrit: मोक्ष, liberation) or Mukti (Sanskrit: मुक्ति, release) refers to liberation from the cycle of death and rebirth and all of the suffering and limitation of worldly existence. In Hindu philosophy, it is seen as a transcendence of phenomenal being, of any sense of material consciousness, time, space, and causation (karma). It is not seen as a soteriological goal in the same sense as in a Christian context, but signifies a dissolution of the material self to uncover the underlying, pure spirit: The undoing of conditioned mentality-materiality or nama-roopa (lit. name-form) to uncover one's eternal identity. Liberation is achieved by (and accompanied with) the complete stilling of all material passions—a state of being known as Nirvana. Buddhist thought differs slightly from the Advaita Vedantist reading of liberation. 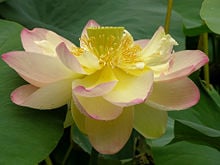 The lotus flower is sometimes used as a symbol of enlightenment.

The lotus has its roots in the mud,
Grows up through the deep water,
And rises to the surface.
It blooms into perfect beauty and purity in the sunlight.
It is like the mind unfolding to perfect joy and wisdom.

In the Western philosophical tradition, the Enlightenment is seen as a phase in cultural history marked by a faith in reason, generally accompanied by rejection of faith in revealed or institutional religion.

Kant's opening paragraph of the essay is a much-cited definition of the Enlightenment:

The German word "Unmündigkeit" means not having attained the age of majority or legal adulthood. It is sometimes also translated as "tutelage" or "nonage" (the condition of "not [being] of age"). Kant, whose moral philosophy is centered around the concept of autonomy, is distinguishing here between a person who is intellectually autonomous and one who keeps him/herself in an intellectually heteronymous, that is, a dependent and immature status.

"Answering the Question: What is Enlightenment?" by Kant 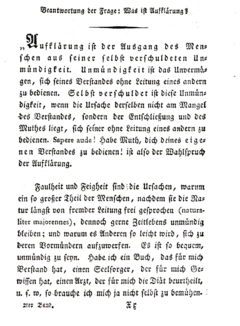 The first page of the 1799 version

"Answering the Question: What is Enlightenment?" (German: "Beantwortung der Frage: Was ist Aufklärung?") is the title of a 1784 essay by the philosopher Immanuel Kant. In the December 1784 publication of the Berlinische Monatsschrift (Berlin Monthly), edited by Friedrich Gedike and Johann Erich Biester, Kant replied to the question posed a year earlier by the Reverend Johann Friedrich Zöllner, who was also an official in the Prussian government. Zöllner's question was addressed to a broad intellectual public, in reply to Biester's essay, entitled: "Proposal, not to engage the clergy any longer when marriages are conducted" (April 1783) and a number of leading intellectuals replied with essays, of which Kant's is the most famous and has had the most impact. Kant's opening paragraph of the essay is a much-cited definition of a lack of Enlightenment as people's inability to think for themselves due not to their lack of intellect, but lack of courage.

Kant's essay also addressed the causes of a lack of enlightenment and the preconditions necessary to make it possible for people to enlighten themselves. He held it necessary that all church and state paternalism be abolished and people be given the freedom to use their own intellect. Kant praised Frederick II of Prussia for creating these preconditions. Kant focused on religious issues, saying that "our rulers" had less interest in telling citizens what to think in regard to artistic and scientific issues.

Adorno's and Horkheimer's definition of "enlightenment"

In the Dialectic of Enlightenment, co-authored with Max Horkheimer, Adorno critically examined the notions of modernity, rationality, and the Enlightenment by extending his criticism to modern civilization rooted in antiquity. The work was the major philosophical treatise of the Frankfurt School. In it, Adorno argued that the ultimate cause of alienation did not lie in the contradiction within capitalist forms of economy or the anti-enlightenment myth of totalitarianism, but that the ultimate cause of alienation lay in the idea of the Enlightenment itself.

He asserted that the ideal of the Enlightenment was to liberate human beings from the bondage and dominion of magic, myth, and other irrational forces that caused fear and terror in people. In other words, to be enlightened meant the liberation from these irrational factors of domination. Rationality, in contrast to irrational myths and notions of magic, was thought to be the key element in order to gain control of irrational factors, stimulate progress, and rationalize civilization.

Modern civilization was thus built as a result of the pursuit of the ideal of the Enlightenment. Modern western civilization, however, which was supposed to be the manifestation of such rationality, gave birth to barbarous acts of terror, such as Nazism and the mass murders committed by Stalin. Adorno, as well as other intellectuals, wondered how such barbarous states could arise within the context of modernity built upon the ideals of the Enlightenment.

Adono did not see these totalitarian acts of terror as being inconsistent with the Enlightenment, and as a regression to rationality based on myth and magic. He argued that these irrational elements existed within the ideas of the Enlightenment itself.

The Enlightenment generally meant the idea of progress in the eighteenth century, with which the bourgeoisie liberated themselves from the constraints of medieval feudalism. Adorno, borrowing the ideas of Max Weber, redefined the idea of the Enlightenment as the liberation of the world from myths, and extended it as a universal principle that guided the development of human civilization.

Adorno argued that the essence of the Enlightenment was humanity’s desire to dominate nature. He identified that in this process, instrumental rationality established man as the subject of dominion and transformed nature into the mere object of domination. But, the Enlightenment (domination of nature) resulted in the domination of the natural element that exists within the self in the form of morality. This consequently gave birth to society as the “second nature,” and brought about the subjugation of man by others, and finally led man to be subjugated by the society that was established.

Adorno further argued that the Enlightenment had inherent barbarous elements within it, and illustrated this point using the Greek myth, The Odyssey. For Adorno, the Enlightenment had an element that led to its self-destruction, and consequently brought about the madness of Nazism and Stalinism.

The work, which was written with a pessimistic tone, was, in a sense, a self criticism of reason and of critical theory. After this work, Horkheimer kept silent and Adorno found a trace of hope in the arts. Adorno later reflected on the philosophic methodology of his critical cultural theory and presented it in the Negative Dialectic.