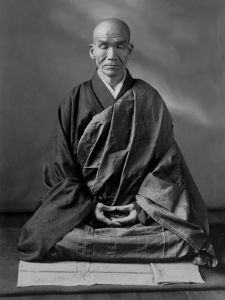 Samadhi is an important part of various meditation and yoga traditions.

In Indian philosophy and religion, Samadhi (Sanskrit: समाधि, lit. "establish, make firm") is a term used in a variety of contexts with different meanings. In yogic Hinduism, Samadhi is the eighth and final limb of of Patanjali's Yoga Sutra, and comprises the pinnacle of achievements in Samyama, the three-tiered practice of meditation including also dharana and dhyana. In Buddhism, it is considered a precursor for enlightenment. At this level of consciousness, the mind is said to become still in one-pointed concentration, while the person remains conscious.

Samadhi is also the Hindi word for a structure commemorating the dead (similar to a mausoleum), which may or may not contain the body of the deceased. Samadhis are often built to honor people regarded as saints or gurus in Hindu religious traditions wherein such souls are said to have passed into (or were already in) samadhi at the time of death.

Samadhi (samādhi समाधि) IPA: [sɑ ma dʰi] is a Sanskrit term for the state of consciousness invoked by complete meditation. Its etymology comes from sam ("together" or "integrated"), a ("towards"), and dha ("to get, to hold"). The resulting meaning could thus be rendered "to acquire integration or wholeness, or truth" (samapatti).

Samadhi is the main subject of the first part of the Yoga Sutras called Samadhi-pada. It is considered to be the eighth or highest limb of yogic practice, where one attains complete supra-consciousness absorption into the true nature of Self. This has been interpreted to mean that Samadhi is a state of complete control (samadhana) over the functions and distractions of consciousness.

In practice, Samadhi is said to be the state of being aware of one’s existence without thinking, in a state of undifferentiated “Beingness." Three intensities (depths) of Samadhi are usually understood:

Laja Samadhi is a latent ("laja"), potential level of samadhi. It begins in deep meditation or trance—even with movement, such as dancing. This kind of samadhi is a state of joy, deep and general well-being, and peaceful meditation.

Savikalpa Samadhi refers to the initial temporary state of full-valued samadhi. The conscious mind is still active, as is the imagination. At this level of samadhi, the mind has become quiet and given up its desires. Vikalpa leads to the Truth, releasing one from any binds of mind (which are mostly imaginations). In Savikalpa Samadhi, one gets the taste of bliss and beingness, but is still attached to one's erroneous identification with the body as well as to his numerous worldly attractions.

Nirvikalpa Samadhi is the end result. There are no more imaginings, wishes, or other products from work of the mind, because the mind is finally under control. Upon entering Nirvikalpa Samadhi, the differences seen before have faded and everything can be seen as one. In this condition, nothing but pure Awareness remains and nothing is missing to take away from Wholeness and Perfection. Once swept into Nirvikalpa Samadhi, consciousness is transformed to a state of absolute non-duality whose only manifestations are light, bliss, and love.

In Nirvikalpa Samadhi, all attachment to the material world and all karma is said to be dissolved. All awareness is withdrawn step by step from the physical, astral, and causal bodies until self-realization or oneness with the soul is achieved. During this process, breathing ceases and the heart stops beating. Aware and fully conscious oneness with soul is then achieved in a most loving way, and all cells of the physical body are flooded with the Ocean of Divine Love and Divine Bliss for any period of duration—hours, days, weeks, until the individual shifts his awareness from the soul back to the physical body. Being fully functional in this world, his awareness stays in connection with the Divine. But some "strange" conditions accompany this state—better health (the body is sustained by Divine Grace), better feelings (even for other people who may contact the body which the enlightened soul has re-identified with), and various miraculous happenings may occur in connection with the Enlightened one. It is entirely possible to stay in Nirvikalpa Samadhi and yet be fully functional in this world. This condition is known as Sahaja Nirvikalpa Samadhi or Sahaj Samadhi (sahaja means "spontaneous" in Sanskrit).

Mahasamadhi (literally great samadhi) is the Hindi term for a realized yogi's conscious departure from the physical body at death, which is also known as Nirvana. Mahasamadhi is the final conscious exit from the physical body. Every infinitesimal piece of attachment or karma is completely surrendered unto God and dissolved into the divine. The individual transcends to worlds beyond karma and returns to God, merging into transcendental Bliss. Advanced yogis have been said to consciously leave (or disidentify with) their bodies as a vital step in the attainment of final samadhi, or soul-liberation. It is at this time that the soul knows a complete and unbroken union with the Heavenly Godhead, and, being free from the limitations of the body, merges effortlessly into the transcendent amrita of Divine Bliss. It is said that sometimes the yogi leaves the body and returns. 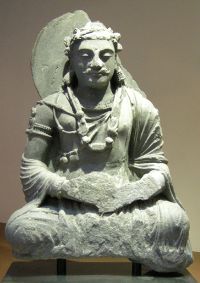 Samadhi, or concentration of the mind (one-pointedness of mind (cittassa-ekaggata), is the third division of the Eightfold Path of the Buddha's teaching: pañña (wisdom), sila (conduct), samadhi (concentration). It developed by samatha meditation. It has been taught by the Buddha using 40 different objects of meditation, according to the Visuddhimagga, an ancient commentarial text. These objects include the breath (anapanasati meditation), loving kindness (metta meditation), various colors, earth, fire, etc. (kasina meditation).

Upon development of samadhi, one's mind is said to becomes temporary purified of defilements, calm, tranquil, and luminous. Once the meditator achieves a strong and powerful concentration, his or her mind is ready to penetrate into the ultimate nature of reality, eventually obtaining release from all suffering.

Important components of Buddhist meditation, frequently discussed by the Buddha, are the successively higher meditative states known as the four jhanas, which in the language of the eight-fold path, is "right concentration." Right concentration has also been defined as concentration arising due to the previous seven steps of the noble eightfold path in the Mahacattsarika sutta.

Four developments of samadhi are mentioned in the Pali Canon:

There are different types of samadhi mentioned as well:

Not all types of samadhi are recommended either. Those which focus and multiply the Five Hindrances are not suitable for development.[2]

The Buddhist suttas also mention that samadhi practitioners may develop supernormal powers (abhijna), and list several that the Buddha developed, but warn that these should not be allowed to distract the practitioner from the larger goal of freedom from suffering.

The bliss of Samadhi is not the goal of Buddhism; but it remains an important tool in reaching the goal of enlightenment. It has been said that Samatha/samadhi meditation and vipassana/insight meditation are the two wheels of the chariot of the noble eightfold path and the Buddha strongly recommended developing them both.[3]

According to the book, God Speaks by Meher Baba, the Sufi words fana-fillah and baqa-billah are analogous to nirvikalpa samadhi and sahaj samadhi respectively. The Christian state of "receiving the Holy Spirit" could also be viewed as analogous to laja samadhi. This is also similar to the Don Juan concept of "stopping the world," as described in the Carlos Castaneda books.

States of consciousness with some of the features of Samadhi are experienced by individuals with no religious or spiritual preparation or disposition. Such episodes occur spontaneously and appear to be triggered by physically or emotionally charged peak experiences such as in runner's high or orgasmic ecstasy, however even mundane activities such as reveling in a sunset, dancing, or a hard day's work have, in rare instances, induced Samadhi.

The only distinction in these spontaneous experiences of samadhi in a secular context (vs. Vedic and Buddhist descriptions) is that in the state of non-duality equivalent to Nirvikalpa, there is no record of any supernormal physical effects as purported in the literature such as the breath and heart-beat stopping or any degree of conscious control (samadhana) during the event. Also absent are siddhis-like special powers as an aftermath although virtually all experiencers report they became imbued with a holistic and compassionate world view and no longer feared death.