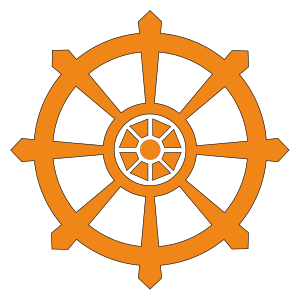 The Dharma wheel, whose eight spokes represent the eight components of the Buddha's Noble Eightfold Path, is a common feature of much Buddhist iconography.

The Noble Eightfold Path (Pāli: Ariyo aṭṭhaṅgiko maggo; Sanskrit:Ārya 'ṣṭāṅga mārgaḥ; Chinese: 八正道, Bāzhèngdào; Japanese: 八正道, Hasshōdō) is the concise summary of the early Buddhist path of moral and spiritual development as defined by Siddhartha Gautama (the historical Buddha). Buddhists (especially the Theravada lineage) claim that this path of practice is the key to escaping the innate suffering (dukkha) of mortal existence and achieving ultimate release (Nirvana). The specific precepts of the Eightfold Path (see below) are part of the Four Noble Truths of Buddhism, the foundational teachings expressing the Buddhism's formative moral and metaphysical outlook. These world-renowned teachings encourage compassion towards all beings, the cultivation of spiritual and moral mindfulness, mental discipline, and the awareness of relationality, among many other aims. In Buddhist iconography, the Noble Eightfold Path is often symbolically represented as the Dharma wheel (Sanskrit: dharmacakra, Pāli: dhammacakka), whose eight spokes represent the eight "branches" of the path (see inset).

On Following the Eightfold Path

Though the steps of the Noble Eightfold Path are sequentially numbered, they are not generally understood as a linear progression that the Buddhist aspirant must "complete" in a particular order. Instead, these eight elements "are to be developed more or less simultaneously, as far as possible according to the capacity of each individual. They are all linked together and each helps the cultivation of the others." [3] Further, the eight mental, social, and spiritual efforts they represent are not understood as discrete entities, but are instead seen as mutually contingent "lenses" whose cumulative effect is to focus the individual's religious efforts on the ultimate attainment of Nirvana.

Given their respective contributions to the gradual enlightenment of an adherent, each element of the eightfold path is thought to be comprised of two stages: a preliminary stage and a higher stage, both of which are experienced as a progression.

The subdivision of the Noble Eightfold Path concerned with wisdom is constituted by those elements that refer primarily to the mental or cognitive aspects of Buddhist praxis:

Right understanding (samyag-dṛṣṭi · sammā-diṭṭhi), which can also be translated as "right view" or "right perspective," refers explicitly to the fact that the Buddhist practitioner must have accepted and internalized the moral metaphysics outlined in the Four Noble Truths. The direct connection between these two Buddhist dogmas is articulated in the Mahāsatipaṭṭhāna Sutta, a discourse attributed to the Buddha Śākyamuni:

This discussion of suffering (dukkha) and cessation (nirodha) is a direct paraphrase of the Four Noble Truths.

However, this appreciation and application of the Four Noble Truths is simply the preliminary stage of right understanding. The higher stage requires a comprehension and acceptance of the entire Buddhist cosmology (as articulated in the Three Marks and elsewhere), including the doctrines of karma, reincarnation (samsara), the aggregate composition of the human self (skandhas), the dependent origination of worldly phenomena (pratitya sumutpada), and the non-permanence (or even non-existence) of the self (anatman).[5]

Right thought (samyak-saṃkalpa · sammā-saṅkappa), which can also be translated as "right intention," "right resolve," or "right aspiration," refers to the modification of one's worldview - specifically through the internalization of Buddhist attitudes. It refers to an engendering of good will, a renunciation of worldly things, and an accordingly greater devotion to spiritual matters. In the Magga-vibhanga Sutta, it is simply explained as follows:

And what is right thought? Being resolved on renunciation, on freedom from ill will, on harmlessness: This is called right thought.[6]

The "ethical conduct" (Śīla) subdivision of the Noble Eightfold Path is constituted by those praxis elements that pertain to a Buddhist practitioner's relationship with other members of his or her society. They are structured around the Buddhist moral ideal of karuṇā, which is generally translated as "compassion" and is somewhat akin to the Christian notion of agapē or "unconditional love."

Right speech (samyag-vāc · sammā-vācā), similar to the exhortation not to "bear false witness" in the Ethical Decalogue,[7] refers to a Buddhist practitioner's proper use of language. In the Magga-vibhanga Sutta, this aspect of the Noble Eightfold Path is explained as follows:

Further explicating this teaching, Walpola Rahula suggests that not engaging in such "forms of wrong and harmful speech" ultimately means that "one naturally has to speak the truth, has to use words that are friendly and benevolent, pleasant and gentle, meaningful and useful."[9]

Right action (samyak-karmānta · sammā-kammanta), which can also be translated as "right conduct," refers to the practical ethics to be employed by Buddhist practitioner in his or her daily life. Describing this practice, the Magga-vibhanga Sutta states:

Right action, together with the ideas of ahiṁsā and right speech, constitute the Five Precepts (Sanskrit: pañcaśīla, Pāli: pañcasīla), which form the fundamental ethical code followed by lay followers of Buddhism:

Right livelihood (samyag-ājīva · sammā-ājīva) is a precept that governs the appropriate occupations for Buddhist lay-people. It is based around the concept of ahiṁsā ("harmlessness" or "non-violence"), and thus states that Buddhist practitioners ought not to engage in trades or occupations that (either directly or indirectly) result in harm to other living beings. Such occupations include, but are not limited to, "trading in arms and lethal weapons, intoxicating drinks, poisons, killing animals, [and] cheating."[12] Likewise, "business in human beings"—such as slave trading and prostitution—is also forbidden,[13] as are several other dishonest means of gaining wealth, such as "[s]cheming, persuading, hinting, belittling, [and] pursuing gain with gain."[14]

The "mental discipline" subdivision of the Noble Eightfold Path is constituted by those elements pertaining to a Buddhist practitioner's vigilant efforts to perfect their minds through concerted meditation practice.

Right effort (samyag-vyāyāma · sammā-vāyāma), which can also be translated as "right endeavor," refers to the Buddhist aspirant's continuous effort to keep his or her mind free of "negative" thoughts that might impair his or her ability to realize the other elements of the Noble Eightfold Path. For example, wishing ill towards another living being (which contradicts the injunction towards "right thought") would be targeted in by one's "right effort." The Buddhist monk Ajahn Chah, of the Thai forest tradition of Theravada Buddhism, describes right effort as follows:

By making right effort, a Buddhist practitioner is considered to be engaging in a lifestyle that is wholesome in karmic terms (i.e., in terms of that effort's ultimate consequences to the practitioner).[16]

Right mindfulness (samyak-smṛti · sammā-sati), also translated as "right memory," is seen as a component of (and precursor to) the practice of Buddhist meditation. Roughly speaking, "mindfulness" refers to "self"-awareness [17], or, more specifically, the practice of being constantly alert to phenomena that affect the body and mind. The Magga-vibhanga Sutta provides a detailed description of this process:

And what, monks, is right mindfulness?

(i) There is the case where a monk remains focused on (his/her) body in and of itself … ardent, aware, and mindful … having already put aside worldly desire and aversion.

(ii) (He/she) remains focused on feelings in and of themselves … ardent, aware, and mindful … having already put aside worldly desire and aversion.

(iii) (He/she) remains focused on the mind [18] in and of itself … ardent, aware, and mindful … having already put aside worldly desire and aversion.

(iv) (He/she) remains focused on mental qualities[18] in and of themselves … ardent, aware, and mindful … having already put aside worldly desire and aversion.

This, monks, is called right mindfulness. [19]

Bhikkhu Bodhi, a monk of the Theravadin tradition, provides a further gloss on this Buddhist notion of mindfulness:

The mind is deliberately kept at the level of bare attention, a detached observation of what is happening within us and around us in the present moment. In the practice of right mindfulness the mind is trained to remain in the present, open, quiet, and alert, contemplating the present event. All judgments and interpretations have to be suspended, or if they occur, just registered and dropped. [20]

Right concentration (samyak-samādhi · sammā-samādhi) (which is possible only in a mind properly condition through "right effort" and "right mindfulness") refers to the practice of Buddhist meditation, with the ultimate goal of consciousness expansion.

And what, monks, is right concentration?

(ii) With the stilling of directed thought and evaluation, (he/she) enters and remains in the second jhāna: rapture and pleasure born of concentration; fixed single-pointed awareness free from movement of the mind onto the object and retention of the mind on the object.

(iii) With the fading of rapture, (he/she) remains in equanimity, mindful and fully aware, and physically sensitive of pleasure. (He/She) enters and remains in the third jhāna which the Noble Ones declare to be "Equanimous and mindful, (he/she) has a pleasurable abiding."

(iv) With the abandoning of pleasure and pain… as with the earlier disappearance of elation and distress… (he/she) enters and remains in the fourth jhāna: purity of equanimity and mindfulness, neither in pleasure nor in pain.

This, monks, is called right concentration[21].

From the standpoint of modern cognitive psychology, the Noble Eightfold Path can be seen as rooted in what is called cognitive dissonance, which is the perception of incompatibility between two cognitions (mental states, images, or constructs). In the essay "Buddhism Meets Western Science," Gay Watson explores this notion as it relates to Buddhist teaching:

Buddhism has always been concerned with feelings, emotions, sensations, and cognition. The Buddha points both to cognitive and emotional causes of suffering. The emotional cause is desire and its negative opposite, aversion. The cognitive cause is ignorance of the way things truly occur, or of three marks of existence: that all things are unsatisfactory, impermanent, and without essential self.[22]

The Noble Eightfold Path is, from this psychological viewpoint, an attempt to resolve this dissonance by changing patterns of thought and behavior. It is for this reason that the first element of the path is right understanding (sammā-diṭṭhi), which is how one's mind views the world. Under the wisdom (paññā) subdivision of the Noble Eightfold Path, this worldview is intimately connected with the second element, right thought (sammā-saṅkappa), which concerns the patterns of thought and intention that controls one's actions. The simultaneous action of these elements (in reforming an individual's thoughts and actions) can be seen in the opening verses of the Dhammapada:

Preceded by perception are mental states,
For them is perception supreme,
From perception have they sprung.
If, with perception polluted, one speaks or acts,
Thence suffering follows
As a wheel the draught ox's foot.

Preceded by perception are mental states,
For them is perception supreme,
From perception have they sprung.
If, with tranquil perception, one speaks or acts,
Thence ease follows
As a shadow that never departs.[23]

Thus, by willfully altering one's distorted worldview (and all associated patterns of action) one is potentially enabled to escape from suffering and further one's personal growth. Watson further elucidates this contention from a psychological standpoint:

Research has shown that repeated action, learning, and memory can actually change the nervous system physically, altering both synaptic strength and connections. Such changes may be brought about by cultivated change in emotion and action; they will, in turn, change subsequent experience.[24]

Retrieved from https://www.newworldencyclopedia.org/p/index.php?title=Eightfold_Path&oldid=1096101
Categories:
Hidden category:
This page was last edited on 17 January 2023, at 02:48.
Content is available under Creative Commons Attribution/Share-Alike License; additional terms may apply. See Terms of Use for details.