In Christianity, agapē is associated with the unconditional love of Jesus Christ, depicted here in his Sacred Heart form.

Agapē (αγάπη in Greek) is one of several Greek words translated into English as love. Greek writers at the time of Plato and other ancient authors used forms of the word to denote love of a spouse or family, or affection for a particular activity, in contrast to, if not with a totally separate meaning from, philia (an affection that could denote either brotherhood or generally non-sexual affection) and eros (an affection of a sexual nature, usually between two unequal partners, although Plato's notion of eros as love for beauty is not necessarily sexual). The term agape with that meaning was rarely used in ancient manuscripts, but quite extensively used in the Septuagint, the Koine Greek translation of the Hebrew Bible.

In the New Testament, however, agape was frequently used to mean something more distinctive: the unconditional, self-sacrificing, and volitional love of God for humans through Jesus, which they ought also to reciprocate by practicing agape love towards God and among themselves. The term agape has been expounded on by many Christian writers in a specifically Christian context. In early Christianity, agape also signified a type of eucharistic feast shared by members of the community.

The Latin translation of agape in the Vulgate is usually caritas, which in older Bibles is sometimes translated "charity." St. Augustine believed caritas to contain not only agape but also eros, because he thought it includes the human desire to be like God. The Swedish Lutheran theologian Anders Nygren critiqued the Augustinian theory, sharply distinguishing between agape (unmotivated by the object) and eros (motivated and evoked by the object) and regarding agape as the only purely Christian kind of love. Yet Nygren's theory has been criticized as having an excessively narrow understanding of agape that is unable to appreciate the relational nature of divine love, as it is often so portrayed in the Bible. 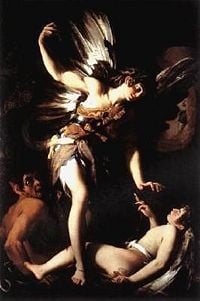 Ancient Greek distinguishes a number of words for love, of which three are most prominent: eros, philia, and agape. As with other languages, it has been historically difficult to separate the meanings of these words totally. However, the senses in which these words were generally used are given below: 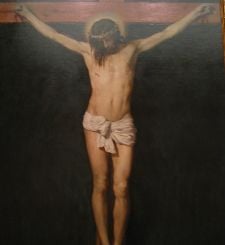 The Crucifixion of Jesus is seen as an example of agape (self-sacrificing love). Diego Velázquez, seventeenth century

In the New Testament, the word agape or its verb form agapao appears more than 200 times. It is used to describe:

Agape in the New Testament is a form of love that is voluntarily self-sacrificial and gratuitous, and its origin is God. Its character is best described in the following two passages:

If I speak in the tongues of men and of angels, but have not love, I am only a resounding gong or a clanging cymbal. If I have the gift of prophecy and can fathom all mysteries and all knowledge, and if I have a faith that can move mountains, but have not love, I am nothing. If I give all I possess to the poor and surrender my body to the flames, but have not love, I gain nothing. Love is patient, love is kind. It does not envy, it does not boast, it is not proud. It is not rude, it is not self-seeking, it is not easily angered, it keeps no record of wrongs. Love does not delight in evil but rejoices with the truth. It always protects, always trusts, always hopes, always perseveres (1 Corinthians 13:1-7).

However, the verb agapao is at times used also in a negative sense, where it retains its more general meaning of "affection" rather than unconditional love or divine love. Such examples include: "for Demas, because he loved (agapao) this world, has deserted me and has gone to Thessalonica (2 Timothy 4:10); "for they loved (agapao) praise from men more than praise from God (John 12:43); and "Light has come into the world, but men loved (agapao) darkness instead of light because their deeds were evil (John 3:19). 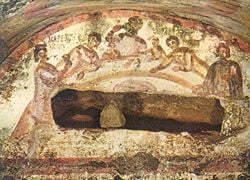 Fresco of a female figure holding a chalice at an early Christian Agape feast. Catacomb of Saints Marcellinus and Peter, Via Labicana, Rome

Agape as a meal

The word agape in its plural form is used in the New Testament to describe a meal or feast eaten by early Christians, as in Jude 1:12, 2 Peter 2:13, and 1 Corinthians 11:17-34. The agape meal was either related to the Eucharist or another term used for the Eucharist.[2] It eventually fell into disuse.

Because of the frequent use of the word agape in the New Testament, Christian writers have developed a significant amount of theology based solely on the interpretation of it.

The Latin translation of agape is usually caritas in the Vulgate and amongst Catholic theologians such as St. Augustine. Hence the original meaning of "charity" in English. The King James Version uses "charity" as well as "love" to translate the idea of agape or caritas. When Augustine used the word caritas, however, he meant by it more than self-sacrificial and gratuitous love because he included in it also the human desire to be like God in a Platonic way. For him, therefore, caritas is neither purely agape nor purely eros but a synthesis of both.

The twentieth-century Swedish Lutheran theologian Anders Nygren made a sharp distinction between agape and eros, saying that the former indicates God's unmerited descent to humans, whereas the latter shows humans' ascent to God. According to Nygren, agape and eros have nothing to do with each other, belonging to two entirely separate realms. The former is divine love that creates and bestows value even on the unlovable object, whereas the latter is pagan love that seeks its own fulfillment from any value in the object. The former, being altruistic, is the center of Christianity, whereas the latter is egocentric and non-Christian. Based on this, Nygren critiqued Augustine's notion of caritas, arguing that it is an illegitimate synthesis of eros and agape, distorting the pure, Christian love that is agape. Again, according to Nygren, agape is spontaneous, unmotivated by the value of (or its absence in) the object, creative of value in the object, and initiative of God's fellowship, whereas eros is motivated and evoked by the quality, value, beauty, or worth of the object. Nygren's observation is that agape in its pure form was rehabilitated through Martin Luther's Protestant Reformation.[3]

In 2006, Pope Benedict XVI in his first encyclical, Deus Caritas Est, addressed this issue, saying that eros and agape are both inherently good as two separable halves of complete love that is caritas, although eros may risk degrading to mere sex without a spiritual support. It means that complete love involves the dynamism between the love of giving and the love of receiving.[4]

Nygren's sharp distinction of agape and eros has been criticized by many. Daniel Day Williams, for example, has critiqued Nygren, referring to the New Testament passage: "Blessed are those who hunger and thirst for righteousness, for they will be filled" (Matthew 5:6). This passage, according to Williams, shows that the two types of love are related to each other in that God's agape can be given to those who strive for righteousness in their love of eros for it, and that Nygren's contrasting categorizations of agape as absolutely unconditional and of eros as an egocentric desire for fellowship with God do not work.[5] How can our desire for fellowship with God be so egocentric as not to be able to deserve God's grace?

Another way of relating agape to eros has been suggested by process theologians. According to them, the ultimate purpose of agape is to help create value in the object so that the subject may be able to eventually appreciate and enjoy it through eros. When God decides to unconditionally love us in his attempt to save us, doesn't he at the same time seek to see our salvation eventually? This aspect of God's love which seeks the value of beauty in the world is called "Eros" by Alfred North Whitehead, who defines it as "the living urge towards all possibilities, claiming the goodness of their realization."[6] One significant corollary in this more comprehensive understanding of love is that when the object somehow fails to build value in response, the subject suffers. Hence, process theologians talk about the suffering of God, and argue that it is an important biblical theme especially in the Hebrew Bible that records that God suffered as a "God in Search of Man"—a phrase which is the title of a book written by the Jewish theologian Abraham Joshua Heschel.[7]

It seems, therefore, that agape and eros, while distinguishable from each other, are closely connected. Love, as understood this way, applies not only to the mutual relationship between God and humans but also to the reciprocal relationship among humans. It can be recalled that ancient Greek did not share the modern tendency to sharply differentiate between the various terms for love such as agape and eros.