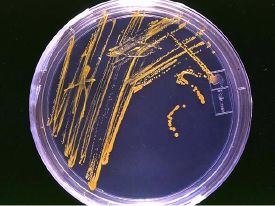 An agar plate streaked with microorganisms isolated from a deep-water sponge. Individual colonies may be seen at the center right.

Agar is an unbranched polysaccharide extracted from the cell walls of some species of red algae or seaweed and having major economic importance. Chemically, agar is a polymer made up of subunits of the sugar galactose, a monosaccharide.

Agar polysaccharides serve as the primary structural support for the algae's cell walls. Through human creativity, it also serves a variety of purposes in human culture and science. Dissolved in hot water and cooled, agar becomes gelatinous. Its chief use is as a culture medium for microbiological work. Other uses are as a laxative; a thickener for soups; in jellies, ice cream and Japanese desserts such as anmitsu; as a clarifying agent in brewing; for paper-sizing fabrics; and as a vegetarian gelatin substitute.

The word agar comes from the Malay word agar-agar (meaning “jelly”). It is also known as kanten or agal-agal (Ceylon agar).

Nutrient agar is used throughout the world as a medium for the growth of bacteria and fungi. It is not used for viruses; however, a particular type of virus—bacteriophages—are often grown in bacteria that are growing on agar.

An agar plate is a sterile petri dish that contains agar plus nutrients (growth media), used to culture microorganisms. Selective growth compounds may also be added to the media, such as antibiotics (Madigan and Martinko 2005).

Individual microorganisms placed on the plate will grow into individual colonies, each a clone genetically identical to the individual ancestor organism (except for the low, unavoidable rate of mutation). Thus, the plate can be used either to estimate the concentration of organisms in a liquid culture or a suitable dilution of that culture, using a colony counter, or to generate genetically pure cultures from a mixed culture of genetically different organisms, using a technique known as streaking. In this technique, a drop of the culture on the end of a thin, sterile loop of wire is "streaked" across the surface of the agar leaving organisms behind, a higher number at the beginning of the streak and a lower number at the end. At some point during a successful "streak," the number of organisms deposited will be such that distinct individual colonies will grow in that area which may be removed for further culturing, using another sterile loop (Madigan and Martinko 2005). Blood agar plates are often used to diagnose infection. On the left is a positive Staphylococcus infection; on the right a positive Streptococcus culture.

Agar plates may be formulated as either permissive, with the intent of allowing the growth of whatever organisms are present, or restrictive or selective, with the intent of only selecting for growth a particular subset of those organisms (Ryan and Ray 2004). This may take the form of a nutritional requirement, for instance providing a particular compound such as lactose as the only source of carbon for energy and material and thereby selecting only organisms which can metabolize that compound, or by including a particular antibiotic or other substance in order to select only organisms which are resistant to that substance. Blood agar, which is generally combined with horse blood, can be used to detect the presence of hemorrhagic microorganisms such as E. coli (O:157 H:7). The bacteria digest the blood, turning the plate clear.

To select for only gram negative organisms, one might use MacConkey agar, a selective and differential media that fosters growth of gram negative bacteria while inhibiting the growth of gram positive bacteria. The addition of bile salts and crystal violet to the agar inhibits the growth of most gram positive bacteria. Differential media includes an indicator that causes visible, easily detectable changes in the appearance of the agar gel or bacterial colonies in a specific group of bacteria. Lactose and neutral red are added to the MacConkey agar to differentiate the lactose fermenters, which form pink colonies, from lactose nonfermenters that form clear colonies. An alternative media, eosin methylene blue (EMB) serves a similar purpose. EMB agar causes E. coli colonies to have a metallic green sheen, and MSA (Mannitol Salt Agar) turns yellow in the presence of mannitol fermenting bacteria.

Agar is a heterogeneous mixture of two classes of polysaccharide: agaropectin and agarose (Wu et al. 1990). Although both polysaccharide classes share the same galactose-based backbone, agaropectin is heavily modified with acidic side-groups, such as sulfate and pyruvate. The neutral charge and lower degree of chemical complexity of agarose make it less likely to interact with biomolecules, such as proteins. Gels made from purified agarose have a relatively large pore size, making them useful for size-separation of large molecules, such as proteins or protein complexes greater than 200 kilodaltons, or DNA fragments greater than 100 basepairs.

Agarose can be used for electrophoretic separation in agarose gel electrophoresis or for column-based gel filtration chromatography.

Agar is typically sold as packaged strips of washed and dried seaweed, or in powdered form. Raw agar is white and semi-translucent. For making jelly, it is boiled in water at a concentration of about 0.7-1 percent weight to volume (e.g. a 7 gram packet of powder into 1 liter of water would be 0.7 percent) until the solids dissolve, after which sweeteners, flavoring, coloring, and pieces of fruit may be added. The agar-agar may then be poured into molds or incorporated into other desserts, such as a jelly layer on a cake.

One of the latest fad diets in Asia is the Kanten Diet. Once ingested, kanten, a seaweed based thickener known as agar-agar, triples in size and absorbs water. This results in the consumer feeling fuller. The agar diet has shown promise in obesity studies (Maeda et al. 2005), but agar/kanten has virtually no nutritional value. It is approximately 80 percent fiber, so part of the diet's effectiveness may be a result of it working as a laxative.

In Indian cuisine, agar is known as "China grass" and is used for making desserts. It also is used as a thickener for soups, and as a clarifying agent in brewing. It can be used to prepare a vegetarian substitute for gelatin, since gelatin traces to the connective tissues of animals.

Research grade agar is used extensively in plant biology, as it is supplemented with a nutrient and vitamin mixture that allows for seedling germination in petri dishes under sterile conditions (given that the seeds are sterilized as well). Nutrient and vitamin supplementation for Arabidopsis thaliana is standard across most experimental conditions. Murashige & Skoog (MS) nutrient mix and Gamborg's B5 vitamin mix are generally used. A 1.0 percent agar/0.44 percent MS+vitamin dH20 solution is suitable for growth media between normal growth temps.

The solidification of the agar within any growth media (GM) is pH-dependent, with an optimal range between 5.4-5.7. Usually, the application of KOH is needed to increase the pH to this range. A general guideline is about 600 µl 0.1M KOH per 250 ml GM. This entire mixture can be sterilized using the liquid cycle of an autoclave.

This medium nicely lends itself to the application of specific concentrations of phytohormones and so forth to induce specific growth patterns. One can easily prepare a solution containing the desired amount of hormone, add it to the known volume of growth media, and autoclave to both sterilize and evaporate off any solvent may have been used to dissolve the often polar hormones in. This hormone/growth media solution can be spread across the surface of petri dishes sown with germinated and/or etiolated seedlings.