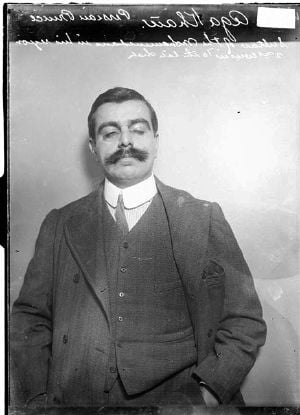 Sultan Mahommed Shah, Aga Khan III, GCSI, GCMG, GCIE, GCVO, PC (November 2, 1877 – July 11, 1957) was the 48th Imam of the Shia Ismaili Muslims. He was one of the founders and the first president of the All-India Muslim League, and served as President of the League of Nations from 1937-38. He is considered to be a founding father of Pakistan. Stressing the need for a progressive interpretation of Islam, he stressed its compassion, respect for human dignity and tolerance and did much to situate his community within the Muslim mainstream. His sons and grandson have continued a tradition of service to the international community through involvement in the United Nations, through diplomacy and through initiatives funded by the Imamate. His own life bridged the colonial period and the post-colonial period in India, where he spent much of his life. He successfully led his community during both eras, helping it adapt to changing circumstances. On the one hand, he was considered to be a celebrity. Owning racing horses, he moved comfortably in the company of royalty and the wealthy. On the other hand, he was respected for his knowledge of Islam, for his philanthropy and for his commitment to human dignity.[1]

He was born in Karachi, in British India (now Pakistan), to Aga Khan II and his third wife, Nawab A'lia Shamsul-Muluk, who was a granddaughter of Fath Ali Shah of Persia (Qajar dynasty).

Under the care of his mother, he received both the religious and Eastern education which his position as the spiritual leader of the Ismailis made indispensable and a sound European training. The latter had been denied to his father and his paternal grandfather. This blending of the two systems of education proved to be very appropriate, as he led his community through times of change, including the end of British rule in India and the establishment of the State of Pakistan as a Muslim homeland. He also attended Eton and Cambridge University.[2]

In 1885, at the age of seven, he succeeded his father as Imam of the Shi'a Isma'ili Muslims.

As he assumed responsibility as Imam, the Aga Khan began to travel widely visiting his community across the globe. This was both so that he could receive the homage of his followers, and so that he could settle differences and advance their welfare with financial help, personal advice and guidance. The distinction of a Knight Commander of the Indian Empire was conferred on him by Queen Victoria in 1897 and he received like recognition for his public services from the German emperor, the sultan of Turkey, the shah of Persia and other potentates.

In 1906, the Aga Khan was a founding member and first president of the All India Muslim League. This continued his own father's example of situating the Ismaili community within the wider Muslim community of India.

Several times during his life, the community presented him with the equivalent in gold and diamonds of his weight (Golden, 1937; Diamond, 1946; and Platinum, 1954.) Almost all of this wealth was invested in programs for the welfare, education and health-care of the community. Trusts were formed after the Diamond and Platinum Jubilees which funded schools, welfare programs and hospitals.[3]

As Imam, Aga Khan III stressed Islam's compassionate aspects and tried to re-situate the Ismaili community within the Muslim mainstream, identifying Ismaili Islam as a path or tariqah alongside others, such as Sufi orders and legal schools. He founded 200 schools throughout his community, beginning in 1905 in Zanzibar. In the same year, he re-organized the community in East Africa with a series of local and regional councils and guidelines on personal law. He initiated similar organizational structures in India. While in theory his own authority as Imam was absolute, he wanted the community to take responsibility for ordering its own affairs according to agreed ethical principles. He believed in individuals’ rights to follow the dictates of their own moral conscience. He strongly supported universal, free primary education and championed women's education. In a 1945 speech in Kenya he pledged to give one pound for every pound donated by non-Ismaili Muslims to fund education.[4]

His 72 years as Imam was the longest in history.

He was an owner of thoroughbred racing horses, including a record equaling five winners of the Epsom Derby, and a total of sixteen winners of British Classic Races. He was British flat racing Champion Owner thirteen times.

He wrote a number of books and papers two of which are of immense importance namely: India in Transition, about the pre-partition politics of India and The Memoirs of Aga Khan, his autobiography.

The Aga Khan was succeeded by his grandson Karim Aga Khan, as 'Aga Khan' and as the 49th present Imam of the Ismaili Muslims. He chose to by-pass his son, Aly Khan, because he believed that the community needed to be led by someone who was in tune with the ethos of the age. At that time, the future Aga Khan IV was studying for a degree in Islamics at Harvard University, from where he graduated in 1959. At the time of Aga Khan III's death on July 11, 1957, his family members were in Versoix. A solicitor brought the will of the Aga Khan III from London to Geneva and read it before the family:

"Ever since the time of my ancestor Ali, the first Imam, that is to say over a period of thirteen hundred years, it has always been the tradition of our family that each Imam chooses his successor at his absolute and unfettered discretion from amongst any of his descendants, whether they be sons or remote male issue and in these circumstances and in view of the fundamentally altered conditions in the world in very recent years due to the great changes which have taken place including the discoveries of atomic science, I am convinced that it is in the best interest of the Shia Muslim Ismailia Community that I should be succeeded by a young man who has been brought up and developed during recent years and in the midst of the new age and who brings a new outlook on life to his office as Imam. For these reasons, I appoint my grandson Karim, the son of my own son, Aly Salomone Khan to succeed to the title of Aga Khan and to the Imam and Pir of all Shia Ismailian followers."[11]

He is buried in Aswan, Egypt at the Mausoleum of Aga Khan.

One of the most significant aspects of Aga Khan III's legacy is the tradition of international service that has continued within his family. His oldest son, Prince Aly (1911-1960), served as Pakistan's ambassador to the United Nations and a Vice-President of the United Nations General Assembly in 1957 also chairing the Peace Observation Committee. His younger son, Prince Sadruddin (1933-2003) was UN High Commissioner for Refugees between 1966 and 1978. The family of the Aga Khan has become internationally known for its commitment to peace and to human welfare, sponsoring numerous developments, aid, educational and humanitarian initiatives.