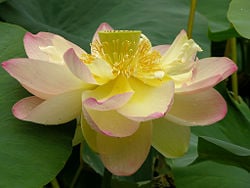 The lotus flower is used as a symbol of enlightenment (bodhi) in the religions and philosophies of India. Rooted in the mud of the world, the lotus rises above and blooms on the top of the lake. In the same way, humans can also aspire to transcend their everyday problems and attain "bodhi."

Bodhi (Pāli and Sanskrit for "enlightenment") refers to the soteriological goal of Buddhism, which is the attainment of enlightenment. The word "Buddha," itself, means one who has achieved "bodhi" ("awakening"). Although commonly used in the context of Buddhism, bodhi is also a technical term with various usages in other Indian philosophies and traditions.

Historically, in early Buddhism, the terms "bodhi" and "nirvana" were synonyms meaning being freed from greed, hate and delusion. However, in the later schools of Mahayana Buddhism, the status of nirvana was downgraded in some scriptures, coming to refer only to the extinction of greed and hate, implying that delusion was still present in one who attained nirvana, and that one needed to attain bodhi to eradicate delusion. Therefore, according to Mahayana Buddhism, the arhant has attained only nirvana, and is thus still subject to delusion, while the bodhisattva not only achieves nirvana but full liberation from delusion as well. The bodhisattva was also distinguished by great compassion for all sentient beings, foregoing release through realization to remain incarnate so as to teach and uplift others, the which was a key feature of Mahayana Buddhism.

The concept of enlightenment is central to many world religions, which collectively seek a higher state of awareness than found in everyday life. The notion of "bodhi" implies that each person has the seed of awakening within them that needs to be cultivated to attain an awakened mind and a better life. Thus, enlightenment as a concept has both individual and cosmic dimensions: It can be an inspiration to discover one's true nature and motivation to improve society and help other sentient beings.

"Bodhi" is an abstract noun formed from the verbal root budh ("to awake," "to become aware," "to notice, know, or understand") corresponding to the verbs bujjhati (Pāli) and bodhati or budhyate (Sanskrit).

According to the teachings of Gotama Buddha, the purpose of life is to become an awakened being (a "Buddha") by understanding the true nature of reality, which is characterized by dukkha, anitya, and pratitya samutpada. The title "Buddha" derives from the word "bodhi," which is most commonly translated in English as "enlightenment." This word conveys the insight and understanding (wisdom) possessed by a Buddha. There is no image of "light" contained in the term "bodhi," however. Rather, it expresses the notion of awakening from a dream and of being aware and knowing (reality). It is, thus, more accurate to think of bodhi as spiritual "awakeness" or "awakenment," rather than "enlightenment" (although it is true that imagery of light is extraordinarily prevalent in many of the Buddhist scriptures).

The term "Bodhisatta" (Pali language), meaning "enlightened (bodhi) existence (sattva)" or "enlightenment-being," was used by the Buddha in the Pali Canon to refer to himself both in his previous lives and as a young man in his current life, prior to his enlightenment, in the period during which he was working towards his own liberation. When, during his discourses, he recounts his experiences as a young aspirant, he regularly uses the phrase "When I was an unenlightened Bodhisatta…." The term therefore connotes a being who is "bound for enlightenment," in other words, a person whose aim it is to become fully enlightened. Some of the previous lives of the Buddha as a bodhisattva are featured in the Jataka Tales. Bodhi is attained when the ten fetters that bind a human being to the wheel of samsara have been dissolved; when the Four Noble Truths have been fully understood and all volitional conditioning has reached cessation (nirodha), giving rise to transcendent peace (nibbana). At this moment, the psychological roots of all greed (lobha), aversion (dosa), delusion (moha), ignorance (avijjā), craving (tanha), and ego-centered consciousness (attā) are completely uprooted. Thus, Bodhi means the awakening experience attained by Gautama Buddha and his accomplished disciples and refers to the unique consciousness of a fully liberated yogi. Bodhi is sometimes described as complete and perfect awareness of the true nature of the universe. After attainment, it is believed that one is freed from the cycle of samsāra: Birth, suffering, death, and rebirth.

While Maitreya (Pali: Metteya) is mentioned in the Pali Canon, he is not referred to as a bodhisattva, but simply the next fully-awakened Buddha to come into existence long after the current teachings of the Buddha are lost.

Bodhi in the Mahayana Buddhism

The Mahayana schools of Buddhism understand the word bodhisattva in different ways, but it primarily refers to a being that compassionately refrains from entering nirvana in order to save others. Certain Mahayana Buddhist sutras stress that bodhi is always present and perfect, and simply needs to be "uncovered" or disclosed to purified vision. For example, the "Sutra of Perfect Awakening" has the Buddha teach that, like gold within its ore, bodhi is always there within the being's mind, but requires the obscuring mundane ore (the surrounding defilements of samsara and of impaired, unawakened perception) to be removed.

An important development in the Mahayana [was] that it came to separate nirvana from bodhi ("awakening" to the truth, Enlightenment), and to put a lower value on the former (Gombrich, 1992d). Originally nirvana and bodhi refer to the same thing; they merely use different metaphors for the experience. But the Mahayana tradition separated them and considered that nirvana referred only to the extinction of craving (= passion and hatred), with the resultant escape from the cycle of rebirth. This interpretation ignores the third fire, delusion: The extinction of delusion is of course in the early texts identical with what can be positively expressed as gnosis, Enlightenment.[1]

Similar doctrines are encountered in the Tathagatagarbha sutras, which tell of the immanent presence of the Buddha Principle (Buddha-dhatu/ Buddha-nature or Dharmakaya) within all beings. Here, the Tathagatagarbha (Buddha-Matrix) is tantamount to the indwelling transformative and liberational power of bodhi, which bestows an infinitude of unifying vision.

The following is specific to Mahayana doctrine only.

Those who study the teaching of a samma-sambuddha and then attain enlightenment in this world are known as arhats. Such beings are skilled at helping others to reach enlightenment, as they may draw on personal experience.

Those who obtain enlightenment through self-realisation, without the aid of spiritual guides and teachers, are known as pratyekabuddhas. According to the Tripitaka, such beings only arise in ages where the dharma has been lost. Their skill in helping others to obtain enlightenment is inferior to that of the arhats and it also takes more time for them to accumulate paramis. Many pratyekas may arise at a single time.

These are perfect, most developed, most compassionate, most loving, all-knowing beings who fully comprehend the dhamma by their own efforts and wisdom and teach it skillfully to others, freeing them from samsāra. One that develops sammā-sambodhi is known as samma-sambuddha. Such a Buddha is the one who gives rise to the path (previously) unarisen, who engenders the path (previously) unengendered, who points out the path (previously) not pointed out. He knows the path, is expert in the path, is adept at the path. Furthermore, a supreme Buddha's disciples now keep following the path and afterwards become endowed with the path, this is the difference between an arahant and a Buddha.