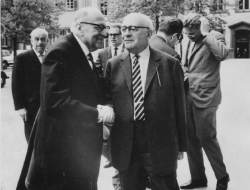 Max Horkheimer (February 14, 1895 – July 7, 1973) was a Jewish-German philosopher and sociologist, a leading thinker of the Frankfurt School/critical theory. Horkheimer was critical to classical and Marx-Leninist interpretation of Marxism that: economic determinism based upon historical materialism; primary role of workers for revolution; the special role of communist party. Adopting a theory of alienation and reification in Marx’s Economic and Philosophical Manuscripts of 1844, Horkheimer interpreted Marxism as a critical theory, whose purpose was to emancipate false-consciousness of alienated and reified man and enlighten man as the subject of history. Horkheimer became a director of the Institute for Social Research (1930-41; 1950-58) at the University of Frankfurt, took “interdisciplinary materialism” as its project which applied Marxism to social, cultural, economic, historical, and psychoanalytic studies.

Horkheimer co-authored Dialectic of Enlightenment with Adorno, and extended his analysis to the criticism of the western civilization. Horkheimer found the barbarism of Nazism and Stalinism, and capitalist interests driven American mass culture as the necessary outcomes of the idea of Enlightenemt, a central idea in western civilization. The work was colored with a pessimistic tone. In his late years, Horkheimer inclined into pessimistic philosophy of Schopenhauer.

Horkheimer was born on February 14, 1895, in Stuttgart to an assimilated Jewish family, the son of Moses Horkheimer. Due to parental pressure, he did not initially pursue an academic career, leaving secondary school at the age of sixteen to work in his father's factory. After World War I, however, he enrolled at Munich University, where he studied philosophy and psychology. He subsequently moved to Frankfurt am Main, where he studied under Hans Cornelius. There he met Theodor Adorno, many years his junior, with whom he would strike a lasting friendship and a fruitful collaborative relationship.

In 1925 he was habilitated with a dissertation entitled Kant's Critique of Judgement as Mediation between Practical and Theoretical Philosophy (Über Kants Kritik der Urteilskraft als Bindeglied zwischen theoretischer und praktischer Philosophie) written under Cornelius. He was appointed Privatdozent the following year. When the Institute for Social Research's directorship became vacant in 1930, he was elected to the position. The following year publication of the Institute's Zeitschrift für Sozialforschung (Journal for Social Research) began, with Horkheimer as its editor.

In 1933 his venia legendi (the right to teach) was revoked by the new Nazi government, and the Institute closed. Horkheimer emigrated to Switzerland, from where he would leave for the USA the following year, where Columbia University hosted the Institute in exile.

In 1940 Horkheimer received American citizenship and moved to Pacific Palisades, California, where his collaboration with Adorno would yield the Dialectic of Enlightenment. Unlike Adorno, Horkheimer was never a prolific writer and in the following twenty years he published little, although he continued to edit Studies in Philosophy and Social Science as a continuation of the Zeitschrift. In 1949 he returned to Frankfurt, where the Institute reopened in 1950. Between 1951 and 1953 Horkheimer was rector of the University of Frankfurt.

He returned to America from 1954 and 1959 to lecture at the University of Chicago. He retired in 1955. He remained an important figure until his death in Nuremberg in 1973.

In 1923, Carl Grungberg was invited from the University of Vienna to the Institute for Social Research at University of Frankfurt and he became the director of the institution. Grunberg identified the aim of institution with developing Marxist-Leninint interpretation of Marxism: Marxism as scientific theory in the sense that social historical development is determined by economic condition; the rise of communist society and the end of capitalism were causally determined by the laws of history; workers played the key role for communist revolution.

Horkheimer was critical to this classical interpretation of Marxism held by Carl Grunberg. Horkeheimer interpreted Marxism as the critical theory and attempted to integrate Marxism with social, cultural, historical, economic, and cultural theories. He characterized the idea of Marxist studies at the institute as “interdisciplinary materialism,” and became a major theorist of “Critical theory.” He conducted dialogues from Marxist perspective with social and human sciences through institute journal. Under the leadership of Horkheimer, a multifaceted program was created and drew collaboration of a number of scholars, who were called the Frankfurt School. They adopted ideas of Hegel, Marx, Freud, Max Weber, and Georg Lukacs.

Classical Marxism viewed arts as a reflection of class consciousness determined by social economic structures. Horkmeimer, on the contrary, understood high cultures and pure arts as an autonomous realm where utopian thought and emancipatory powers are preserved. Horkheimer, however, was critical to American mass culture which he saw the products of manipulation by mass production and mass consumption in market economy.

In Eclipse of Reason (1946), Horkheimer presented a process of how Enlightenment rationality degenerated into instrumental rationality which was a calculation of means to the ends to achieve self interests; rationality, which was supposed to be objective in the sense of having communal and interpersonal basis, became instruments to serve for achieving “subjective” self-interests.

Horkheimer called instrumental rationality “subjective reason” and carried out extensive criticism on this central notion of Enlightenment. Horkeheimer, however, did not present any alternative to the concept of rationality.

In Dialectic of Enlightenment (1947) (see Adorno article), which Horkheimer co-authored with Adorno, he extended his social cultural criticism to western civilization. He wrote this work in California while he was in exile. His question was why and how the terror of Nazi and Stalinist mass murder arose from modernity. Against the popular view that barbarianism was opposite to the idea of Enlightenment, he argued that barbarianism, terror, and irrational elements were inherent to Enlightenment. In the work, Horkheimer explained the process and the reason of how and why the Enlightenment rationality, supposed to be the key factor of liberation and freedom, became instrumental rationality and brought about suppression of individuals, cultural poverty, and barbarism.

In Dialectic of Enlightenment, Horkmeimer lost hope for the project he initiated in 1930s. After this work, he turned his attention to Pessimism of Schopenhauer which he studied at the early stage of his carrier.