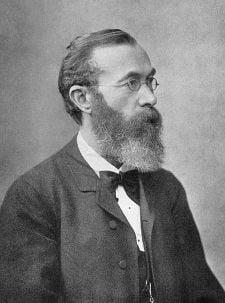 Wilhelm Maximilian Wundt (August 16, 1832 – August 31, 1920) was a German physiologist, philosopher, and psychologist. Wundt’s scientific psychology and its fate provide a valuable lesson for both history and psychology. Innovatively combining philosophy and physiology, Wundt created a new branch of science, psychology, which was a research field of physiology addressing questions of philosophy. Wundt is typically acknowledged as the founder of experimental psychology and of structuralism in psychology. His system is considered to be dualistic, atomistic, associationistic, and introspective.

The later years of Wundt's life were spent working on Völkerpsychologie which he understood as a study into the societal and cultural basis of higher mental functioning. Although psychology did not follow Wundt's original conception, as human beings advance in knowledge of our own nature his legacy remains as a significant component in this process.

Wilhelm Maximilian Wundt was born on August 16, 1832, in Neckarau, in Baden, Germany. He was the fourth child in the family. His father was Maximilian Wundt, who was a Lutheran pastor, and his mother was Marie Frederike. Many ancestors on both sides of Wilhelm Wundt’s family were intellectuals, scientists, professors, physicians, and government officials.

During his childhood and adolescence, Wundt was allowed only a strict regiment of learning, with little time for play or idleness. This kind of upbringing produced a rather dour person, totally committed to intellectual endeavors of a systematic and prolific nature.

At the age of thirteen, Wundt began his formal education at a Catholic Gymnasium. The German gymnasium of the nineteenth century was a college preparatory high school, and the entrance was restricted to the sons of middle-class intellectuals. The German university system also was highly unique. One had to obtain the usual doctorate and then a second, higher level doctorate before one could teach.

From 1851 to 1856, Wilhelm Wundt studied at Tübingen, Heidelberg, and Berlin. After graduating in medicine from the University of Heidelberg in 1856, Wundt studied briefly with Johannes Müller before joining the University of Heidelberg, where he became an assistant to the physicist and physiologist Hermann von Helmholtz in 1858. There, he wrote Contributions to the Theory of Sense Perception (1858-62). He married Sophie Mau while at Heidelberg.

It was during this period that Wundt offered the first course ever taught in scientific psychology, stressing the use of experimental methods drawn from the natural sciences. His lectures on psychology were published as Lectures on the Mind of Humans and Animals (1863). He was promoted to Assistant Professor of Physiology in 1864.

In 1874, Wundt published Grundzüge der physiologischen Psychologie (Principles of Physiological Psychology), which became a standard textbook in the field. This work in its many editions expounded the central tenets of Wundt’s experimental psychology, and advanced a system of psychology that sought to investigate the immediate experiences of consciousness, including sensations, feelings, volitions, ideas, and "apperception" or conscious perceptions.

In 1875, Wundt took up a position at the University of Leipzig, and in 1879, set up the first psychological laboratory in the world. Two years later, in 1881, he founded Philosophische Studien (Philosophical Studies), a journal to report the experimental studies of his laboratory. The list of Wundt’s students includes the names of many of the founders of psychological systems in Germany, throughout Europe, and in America. However, the majority of these students deviated from his conception of psychology as they developed their careers.

During the years at Leipzig, Wundt supervised 186 doctoral dissertations in various disciplines and taught over 24,000 students. In 1900, Wundt began a massive undertaking, the publication of his masterwork, Völkerpsychologie (Folk Psychology), which was completed only in 1920, the year of his death. In this ten-volumed work, Wundt believed he developed the other half of psychology, the study of humankind in cultural and societal surrounding as opposed to as an individual in the laboratory.

For Wundt, psychology was the scientific study of immediate experience, and thus the study of human consciousness, or the mind, as long as mind is understood as the totality of conscious experience at a given moment.

Wundt combined philosophical introspection with techniques and laboratory apparatus brought over from his physiological studies with Helmholtz, as well as many of his own design. This experimental introspection was in contrast to what had been called psychology until then, a branch of philosophy where people introspected themselves. Wundt argued that:

...we learn little about our minds from casual, haphazard self-observation...It is essential that observations be made by trained observers under carefully specified conditions for the purpose of answering a well-defined question (Principles of Physiological Psychology, 1907).

In fact, Wundt proposed an introspective psychology. According to Wundt, it is unnecessary to postulate a special inner sense to observe one’s consciousness. One simply has experiences and can describe them; one does not have to observe the experiences happening.

Wilhelm Wundt considered the development of mind an important topic, which could be addressed partially by child and animal (comparative) psychology, but above all by the study of the historical development of the human species. Life is short, so our own experience is limited; but we can draw on the historical experience of humanity as written and preserved in existing cultures at different levels of development. This collective experience enables us to study the inner recesses of consciousness, those well removed from sensory-motor responses and hence not amenable, in Wundt’s view, to experimental study. He called this his Völkerpsychologie (ethnic or folk psychology), embracing especially the study of language, myth, and custom.

Wundt divided language into two aspects: outer phenomena, consisting of actually produced or perceived utterances, and inner phenomena, the cognitive processes that underlie the outer string of words. Sentence production, according to Wundt, begins with a unified idea which one wishes to express, the Gesamtvorstellung (whole mental configuration). The analytic function of apperception prepares the unified idea for speech, as far as it must be analyzed into component parts and a structure that retains the relationship between the parts and the whole.

Wundt’s remarks on myth and custom are unexceptional. He viewed history as going through a series of stages from primitive tribes to an age of heroes, and then to the formation of nation-states, culminating in a world state based on the concept of humanity as a whole. 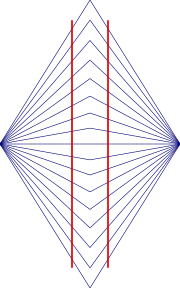 In his studies of perception and "apperception," Wundt discovered that our experience does not always correspond to the physical reality. Thus, what we perceive may be a distortion of reality, or an illusion.

The Wundt illusion is an optical illusion that was first described by Wundt. The two red horizontal lines are both straight, but they look as if they are bowed inwards. The distortion is induced by the crooked lines on the background, as in Orbison's illusion. The Hering illusion produces a similar, but inverted effect. 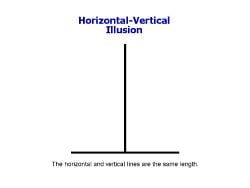 Another variant of the Wundt illusion is the Horizontal-Vertical Illusion, introduced by Wundt in 1858. The two intersecting lines are equal in length although the vertical line appears to be much longer. The horizontal line needs to be extended up to 30 percent to match the perceptual length of the vertical line. This is not confined to simple line drawings, as this can also be seen in buildings, parking meters, as well as other objects viewed in a natural setting.

Wundt subscribed to a "psychophysical parallelism" (which entirely excluded the possibility of a mind-body/cause-effect relationship), which was supposed to stand above both materialism and idealism. His epistemology was an eclectic mixture of the ideas of Spinoza, Leibniz, Kant, and Hegel. Wundt (1896) wrote:

In psychology we find that only those mental phenomena which are directly accessible to physical influences can be made the subject matter of experiment. We cannot experiment upon mind itself, but only upon its outworks, the organs of sense and movement which are functionally related to mental processes. So that every psychological experiment is at the same time physiological.

The methods Wundt used are still used in modern psychophysical work, where reactions to systematic presentations of well-defined external stimuli are measured in some way: reaction time, reactions, comparison with graded colors or sounds, and so forth. His chief method of investigation was called "introspection" in the terminology of the time, though "observation" may be a better translation.

Wundt’s political outlook reflected the German intellectual climate of the nineteenth century. Germans rejected the Enlightenment. They were romantic intellectuals who valued things of the heart, spirit, and soil rather than things of the cold intellect. They saw Germany as midway between the intellectualism of the countries west of the Rhine, and the anti-intellectual, religious culture of the Holy Mother Russia to the east. They rejected the utilitarianism and individualism of British philosophy. In place of individualism German intellectuals constantly sought synthesis, to reconcile opposites into a higher truth. Psychological synthesis was a key element in Wundtian psychology.

During World War I Wilhelm Wundt and other elitist intellectuals of Germany wrote anti-English and anti-American tracts that reveal the gulf between German and Anglo-American world views. For Wundt and other German intellectuals, the English were mere traders who regarded "the whole existence of man on earth as a sum of commercial transactions which everyone makes as favorably as possible for himself" (Ringer, 1969). The English were excoriated by Wundt for their egotistic utilitarianism, materialism, positivism, and pragmatism. The German ideal, on the other hand, was "the hero," a warrior whose ideals were "sacrifice, faithfulness, openness, respect, courage, religiosity, charity, and willingness to obey." The goal of the Englishman was seen as personal comfort while that of the German was seen as sacrifice and service. Germans also had a long-standing contempt for French "civilization," which they considered a superficial veneer of manners as opposed to the true German, organic "culture."

Wilhelm Wundt never gave a name to his school of psychology. As the founder, what he did was simply psychology without qualification. Wundt’s student Edward B. Titchener, who opposed the functionalism widely accepted in the United States, called his own system structuralism, in the year 1898. This label became attached to Wundt’s psychology. Wundt's laboratory students in Germany called their approach Ganzheit Psychology ("holistic psychology") following Wundt's death.

Wundt's students and his impact on world psychology

Several of Wundt's students became eminent psychologists in their own right:

Titchener, a two-year resident of Wundt's laboratory and one of Wundt's most vocal proponents in the United States, was responsible for several English translations and mistranslations of Wundt's works supporting his own views and approach, which he termed "structuralism." Titchener's focus on internal structures of mind was rejected by Skinnerian behaviorists, who dominated psychological studies in the mid-twentieth century. Part of this rejection included Wundt, whose work fell into eclipse during this period. It is only in the late twentieth century that his true positions and techniques received reconsideration and reassessment by major American psychologists.