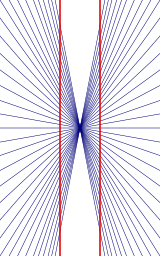 The Hering illusion is an optical illusion discovered in 1861. The two vertical lines are both straight, but they look as if they were bowed outwards. The Orbison illusion is a variant of the Hering illusion, as is the Wundt illusion. Although the Hering illusion and other similar illusions have not been completely explained, they has stimulated much valuable research into human perceptual processes. They have also been utilized by artists to bring about entertaining and impressive effects in their works.

The Hering illusion is named for the German physiologist Ewald Hering, who first published the illusion in 1861.

When looking at the illusion, the viewer appears to see a pair of bowed or curved lines placed in front of a series of other lines. In reality, these bowed lines are parallel, and only appear to be curved.

The effect of the Hering illusion is often attributed to "angular displacement," where the perception of the straight parallel lines is skewed because of the effect of the angular lines surrounding them. The distortion may also be produced by the lined pattern on the background, which simulates a perspective design and creates a false impression of depth.

It has been observed that the illusion takes place when the image is horizontal or vertical, but is decreased when the image is rotated at an angle. This discovery has challenged traditional theories about how the illusory effect is generated.

Like many perceptual illusions, the Hering illusion helps neuroscientists study the mechanisms of perception. It also provides an intriguing experience for viewers, and as such has been utilized by artists in their works.

Retrieved from https://www.newworldencyclopedia.org/p/index.php?title=Hering_illusion&oldid=1008363
Categories:
Hidden category:
This page was last edited on 20 December 2017, at 15:19.
Content is available under Creative Commons Attribution/Share-Alike License; additional terms may apply. See Terms of Use for details.