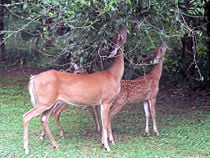 A deer and two fawns feeding on some foliage

Herbivory is a type of biological interaction whereby an organism, known as a herbivore, consumes principally autotrophs or their products, such as subsisting on plant tissues, plant products (fruit, pollen, nectar), algae, and photosynthesizing bacteria. By that definition, many fungi, some bacteria, many animals, some protists, and a small number of parasitic plants can be considered herbivores. However, herbivory generally is restricted to animals eating plants and plant material, such as insects or cattle consuming grasses. Fungi, bacteria, and protists that feed on living plants are usually termed plant pathogens. Microbes that feed on dead plants are saprotrophs. Plants that obtain nutrition from other living plants are usually termed parasitic plants.

The term herbivore, referring to animals with a diet wholly or mainly of plant matter, is in contrast to carnivore, which refers to animals with a diet consisting wholly or mainly of animal matter, and omnivore, which refers to animals that consume both animal and plant matter. Unlike predation, herbivory typically does not result in the killing of the plants, although there are exceptions. Unlike detritivory, herbivory involves the consumption of living plants and their products rather than the consumption of dead organic material (detritus).

Plants have an extraordinary diversity of mechanical and chemical defenses against herbivores, limiting herbivory so that plants can survive and reproduce, while herbivores have diverse adaptations to allow them to gain nourishment from plants. In some cases, herbivory is actually a benefit to the plants, such as pollination or seed dispersal, and various plants have developed elaborate mechanisms to encourage herbivory. Some of the chemicals that plants produce to discourage herbivory have been used by humans for such purposes as spices, drugs, and poisons. 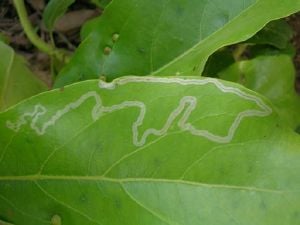 A herbivore is an animal, aquatic or terrestrial, that is adapted to eat plants and no meat. Although such animals are sometimes referred to as being vegetarian, this term is more properly reserved for humans who choose not to eat meat as opposed to animals that are unable to make such choices.

Herbivores differ in the extent, specificity, and nature of their feeding. Some, such as many Lepidopteran larvae, are specific to consuming particular species or genera of plants. The panda has a diet which is 99 percent bamboo. Other animals, such as various ungulates, may consume a wide diversity of plants and plant parts.

Herbivores can be grouped according to which part of the plant they eat. Frugivores eat mainly fruit, folivores specialize in eating leaves, and nectarivores feed on nectar. Among herbivorous insects and other arthropods, the level of feeding specialization can be far more fine-tuned, including seed-eaters ("granivores"), pollen-eaters ("palynivores"), plant fluid-feeders ("mucivores"), and those specialized to feed on wood ("xylophages"), or roots ("rhizophages"). In other animals, the degree of specialization is not so advanced, however, and many fruit- and leaf-eating animals also eat other parts of plants, notably roots and seeds.

The techniques used to get at the foodstuff are wide and varied, and include the "pierce and suck" technique, surface fluid feeding, hole feeding, margin feeding, and skeletonization (Labandeira 1998).

There is a misconception that if an animal is herbivorous, it represents less danger to humans than a carnivore (or, sometimes, no danger at all). This is not logically sound; few animals, even carnivores, will seek humans as a food source, but even herbivores will attack a human if necessary to defend itself. For example, in national parks such as the United States' Yellowstone Park, bison represent significantly more danger to humans than wolves, which are likely to avoid people. Of Africa's Big Five game (a term coined by hunters in Africa to refer to the five most dangerous animals to hunt: rhinoceros, leopard, cape buffalo, elephant, and lion), three are herbivores.

Our understanding of herbivory in geological time comes from three sources: fossilized plants, which may preserve evidence of defense (such as spines) or herbivory-related damage; the observation of plant debris in fossilized animal feces; and the construction of herbivore mouthparts (Labandeira 1998).

Long thought to be a Mesozoic phenomenon, evidence for herbivory is found almost as soon as fossils appear that could show it. Within under 20 million years of the first fossils of sporangia and stems towards the close of the Silurian, around 420 million years ago, there is evidence that they were being consumed (Labandeira 2007). Animals fed on the spores of early Devonian plants, and the Rhynie chert also provides evidence that organisms fed on plants using a "pierce and suck" technique (Labandeira 1998).

Hole feeding and skeletonization are recorded in the early Permian, with surface fluid feeding evolving by the end of that period (Labandeira 1998).

Arthropods appear to have developed herbivory in four phases, changing their approach to herbivory in response to changing plant communities (Labandeira 2006).

Plants have an enormous array of mechanical and chemical defenses against herbivores, allowing them to improve their chances of survival and reproduction. These defenses include mechanical protections on the surface of the plant, production of complex polymers that reduce plant digestibility to animals, and the production of toxins that kill or repel herbivores. Defenses can either be constitutive, always present in the plant, or induced, produced or translocated by the plant following damage or stress. The term host plant resistance is also used by plant breeders to refer to these mechanisms.

Plants also have features that enhance the probability of attracting natural enemies to herbivores, such as acacias that provide ants with food from sap and special fruits and housing in hollow thorns, while the ants protect the trees from other insects and browsing mammals.. Plants may emit semiochemicals, odors that attract natural enemies, and may provide food and housing to maintain the natural enemies’ presence.

A given plant species often has many types of defensive mechanisms, mechanical or chemical, constitutive or induced, which additively serve to protect the plant, and allow it to escape from herbivores.

However, in some cases, herbivory is actually encouraged by plants to assist in reproduction. A notable example is the production of nectar to attract bees, which are necessary for pollination. 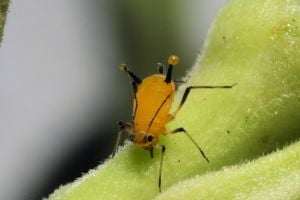 Herbivores are dependent on plants for food and themselves have diverse mechanisms to obtain this food despite the varied arsenal of plant defenses against herbivory. The adaptations of herbivores that allow them to overcome plant defense have been likened to “offensive traits” and consist of those traits that allow for increased feeding and use of a host (Karban and Agrawal 2002).

For example, bovids have mutually beneficial symbiotic relationships (mutualism) with bacteria and other microorganisms that allows the digestion of cellulose, the most abundant form of living terrestrial biomass, but one that is indigestible for many animals, including humans. Herbivorous mammals, like horses and rabbits, which depend on microbial fermentation, also tend to have a very large and complex large intestine, as opposed to carnivores, like cats and dogs, that tend to have a simple and small large intestine.

Some animals can consume plants with substances that are toxic to other organisms, such as having various enzymes that allow them to nullify the toxins.

Relationships between herbivores and their host plants is considered to often result in reciprocal evolutionary change. The process is believed to occur as follows. As herbivores eat plants, they provide a selective pressure favoring those plants that are less desirable to the herbivores and can mount a defensive response, whether the response is incorporated biochemically or physically, or induced as a counterattack. The plant would then prosper, until the herbivore developed a mechanism to overcome this defense, such as developing an enzyme that can break down a toxin into harmless byproducts. In cases where this relationship demonstrates “specificity” (the evolution of each trait is due to the other), and “reciprocity” (both traits must evolve), the species are thought to have coevolved (Futuyma and Slatkin 1983). The escape and radiation mechanisms for coevolution is the idea that adaptations in herbivores and their host plants has been the driving force behind speciation (Ehrlich and Raven 1964; Thompson 1999).